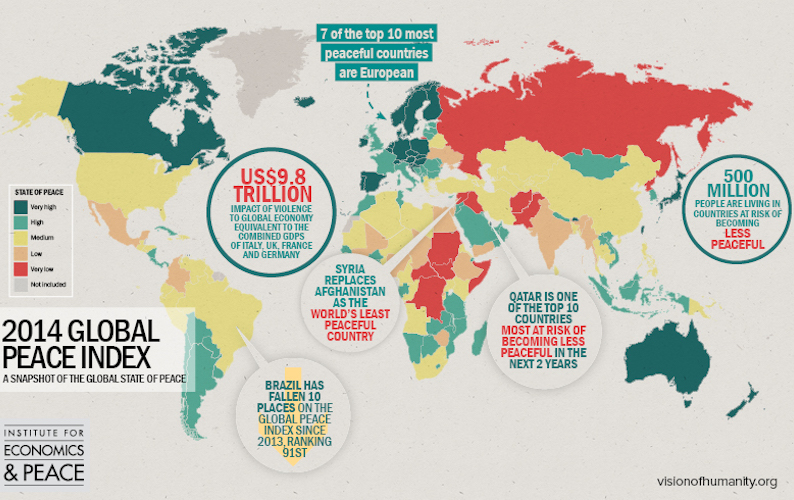 Yesterday the Institute for Economics and Peace (IEP) released their annual ranking of 162 countries’ in terms of their peacefulness—the Global Peace Index (GPI). The GPI is in its eighth year running, and for the seventh year running they have found the world’s peacefulness in decline.

The historical measures of GPI have shown that 111 countries have declined in their level of peace, and only 52 have improved since 2008.

“Our research shows that peace is unlikely to flourish without deep foundations,” says Steve Killelea, Founder of IEP and Vision of Humanity, “This is a wakeup call to governments, development agencies, investors and the wider international community that building peace is the prerequisite for economic and social development.”

While violence obviously has a serious impact on people’s lives, we don’t always think about the economic costs. IEP found that the global impact of violence is 11.3% of global GDP or $US 9.8 trillion.

The world would not only be a better place without violence, it would also be wealthier and more sustainable for all its inhabitants. Imagine if this money was invested into sustainable energies, education and training in entrepreneurship—for people in all countries! What a different world we could create.

The GPI is based on the measurement of 22 indicators:

Stay in touch with the Global Peace Index: