Announcing the book launch of
“Conversations in Peace”

to be launched by Dame Marie Bashir 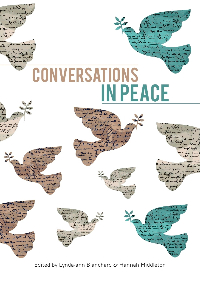 plus film of ‘Conversations in Peace’ introduced by philanthropist Steve Killelea

These inspiring individuals aspire to a future in which respect for human rights is universal and unchallenged. In highly creative ways they show how poverty can be eradicated, non-violence embraced, the rich and powerful persuaded that peace with justice is precious, and that violence of any kind is not only contrary to any notion of a common humanity, but also serves no purpose.