The Sydney Peace Foundation has awarded its Gold Medal for peace with justice to WikiLeaks co-founder Julian Assange. The citation reads, ‘For exceptional courage and initiative in pursuit of human rights’. 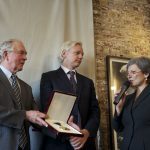 The Director of the Sydney Peace Foundation, Professor Stuart Rees, has stated:

‘Assange’s work is in the Tom Paine Rights of Man and Daniel Ellsberg Pentagon Papers tradition- challenging the old order of power in politics and in journalism. Assange has championed people’s right to know and has challenged the centuries old tradition that governments are entitled to keep the public in a state of ignorance. In the Paine, Ellsberg and Assange cases, those in power moved quickly to silence their critics even by perverting the course of justice’.

The Sydney Peace Foundation Gold Medal was awarded to Julian Assange at a ceremony in mid 2011.

Presented by veteran Australian broadcaster Mary Kostakidis, the Sydney Peace Medal recognises Assange’s leadership, courage and tenacity in journalism and publishing, and pays tribute to his enduring conviction that truth matters and justice depends on it. Kostakidis, a former member of the Australian Human Rights Consultation Committee, praised WikLeaks as an “ingenious and heroic website that has shifted the power balance between citizen and the state by exposing what governments really get up to in out name”.

Acknowledging that “exposing secrets can be dangerous business”, Kostakidis thanked Assange for his “heroic courage” as a whistleblower to take “great risks for our benefit”.

Assange has received a great number of other awards including: Economist Freedom of Expression Award (2008), Amnesty International UK Media Award (2009), Award of Distinction in the Digital Communities (2009), Sam Adams Award (2010), Le Monde Person of the Year (2010), Martha Gellhorn Prize for Journalism (2011), Voltaire Award of the Victorian Council for Civil Liberties (2011), Walkleys Award for Outstanding Contribution to Journalism (2011) and the Italian Privacy Award (2012).