In 2013 the Sydney Peace Foundation awarded a posthumous Gold Medal for Human Rights to Stéphane Hessel for his life-long contribution to building a more peaceful and just society. On 2 May, at the Australian Ambassador’s Residence in Paris, Ambassador Ric Wells presented to Christiane Hessel-Chabry, Hessel’s widow. 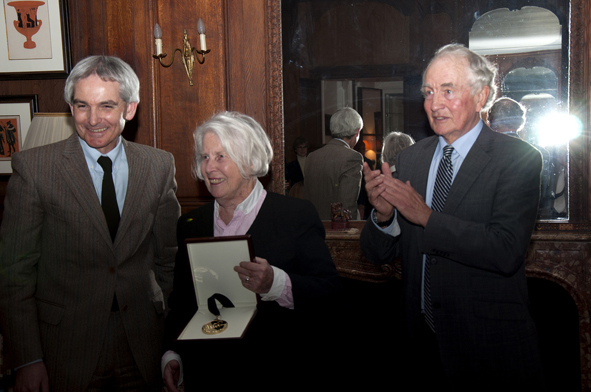 Stéphane Hessel was a German born Jew whose family fled to France and became a fighter in the French Resistance, where he was captured, tortured and escaped execution by the Nazis. On returning to Paris, Hessel became a diplomat and was a one of twelve members of the committee who drafted the Universal Declaration of Human Rights. As the French Ambassador to the United Nations in Geneva, Hessel promoted non-violent responses to conflict and made many stands against human rights abuses. In 2009 he published the Book “Time For Outrage” which sold 4.5 million copies in 35 countries and is credited with being the catalyst for Occupy Movements around the world.

Stéphane Hessel was originally selected by the Sydney Peace Prize Jury to be the 16th recipient of the Prize. Sadly, on 27 February 2013, at 95-years old, Hessel passed away quietly in his sleep.

Hessel’s values and views challenged governments and citizens all over the world and inspired the Sydney Peace Foundation to honour him. He worked within authorised power including diplomacy at the highest levels. He kept alive the best ideals of the French Resistance – never to compromise on what is morally and ethically right. Consistent with those ideals he frequently opposed powerful people and orthodox political positions.

Stéphane Hessel regarded a capacity for outrage against injustice as one of the essential qualities of a human being. He urged outrage at governments’ treatment of immigrants and the poor, at the destruction of the environment and by the erosion of social welfare. His greatest outrage concerned Israel’s abuse of the human rights of Palestinians. ‘Have the Israelis forgotten the human values of Judaism?’ he asked.

At reception hosted by Australian Ambassador to France, following an address by the Foundation’s Chair Prof Stuart Rees, Ambassador Ric Wells presented the Gold Medal will be presented to Hessel’s widow Madame Christiane Hessel-Chabry. The ceremony also acknowledged Christiane Hessel’s work for social justice, as illustrated in her recent book, Gaza I Write Your Name and Stéphane’s significant publisher Sylvie Crossman reminded the Australian and French audience of Hessel’s connection with Australian Indigenous peoples and his plea: ‘To Create is To Resist. To Resist is To Create.’

Please note that you can enlarge a photo by clicking on it, and then use the back arrow through your browser to return to this screen.

We express our gratitude to Ambassador Wells, Harriet O’malley, Sylvie Crossman, Christiane Hessel-Chabry and her family, and other distinguished guests and friends, for making this a special commemoration of a memorable man and his life’s work.

Learn more about The Vision of Stéphane Hessel: https://sydneypeacefoundation.org.au/the-vision-of-stephane-hessel/