The Sydney Peace Foundation invites you to attend:

Israeli Apartheid and the Means of Resistance 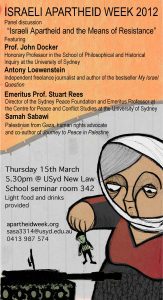 This is a panel discussion titled ‘Israeli Apartheid and the Means of resistance’ featuring:

Prof. John Docker: Honorary Professor in the School of Philosophical and Historical Inquiry at the University of Sydney

Emeritus Prof. Stuart Rees: Director of the Sydney Peace Foundation and Emeritus Professor at the Centre for Peace and Conflict Studies at the University of Sydney

Samah Sabawi: Palestinian from Gaza, human rights advocate and co-author of ‘Journey to Peace in Palestine’

Food and drinks will be provided!

Sponsored by Australians for Palestine (http://www.australiansforpalestine.net/)

Map and how to get there: http://sydney.edu.au/law/about/camp…