ABC’s Big Ideas have recorded many of the Sydney Peace Foundation’s events this year. These have been broadcasted across Australia, the Pacific, and the world wide web… Here are the links:

Richard Falk on the Palestinian Struggle 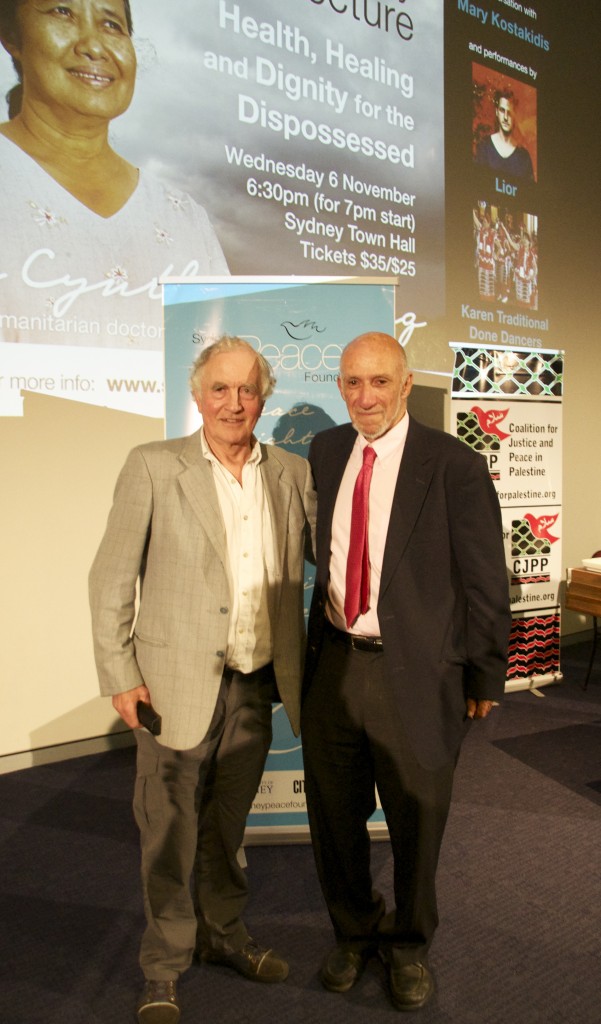 Richard Falk is Emeritus Professor of International Law at Princeton University and the UN’s Special Rapporteur on Palestinian human rights.

He’s 80 years old, he’s Jewish and he draws a lot of fire for his tough critical stand on Israel; from the Israeli government, the US and some of his colleagues within the UN.

The premise for this address is that the international community is failing the Palestinians, due largely to their fear of offending the Israeli and the American governments.

He won no friends for his article in the Foreign Policy Journal, after the Boston marathon bombings, when he wrote that, “the American global domination project is bound to generate all kinds of resistance in the post colonial world.”

He’s highly critical of Barack Obama, accusing him of “succumbing to the Beltway ethos of Israel first”. Criticism of Falk has been echoed in some of the Australian press with his appearance in Australia at the Human Rights in Palestine Conference. Here he is delivering this address for the Sydney Peace Foundation at the University of Sydney. Stuart Rees is the moderator.

On Saturday 19th October a section of the event will run as a 28min episode on ABCNEWS24 at 2.30pm.
Then this program will REPEAT on Monday 21st October on ABCNEWS24 at 5.30am. (as long as there’s no breaking news)

Then on Tuesday 22nd October on ABC1 at 11am Falk will be a part of the ABC Big Ideas ShortCuts program.
Then this program will REPEAT on Saturday 26th October on ABCNEWS24 at 12midnight (as long as there’s no breaking news).

The Dalai Lama in Conversation with Andrew West 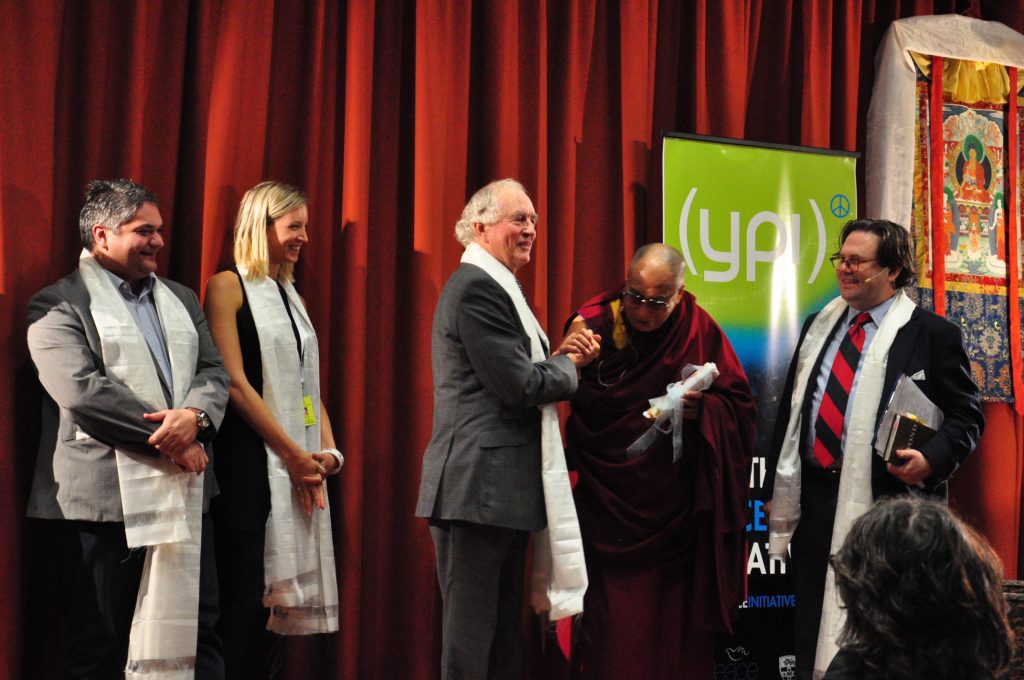 In April, the Sydney Peace Foundation stood up to a controversial decision by University of Sydney management to cancel an event hosting His Holiness the Dalai Lama. Following pressure from the international media, including the Sydney Peace Foundation Chair Stuart Rees appearing on the ABC 7.30 Report, and an online petition signed by over 14,000 people, the University management reversed their decision and agreed to respect their original agreement to host a separate event on University premises. Tickets booked out within hours.

Meanwhile the Sydney Peace Foundation agreed to host a separate more intimate event inviting the Tibetan community, students and their supporters, to the Theatrette at NSW Parliament House.

Here His Holiness the Dalai Lama is in conversation here with ABC Radio National Religion and Ethics presenter, Andrew West.

This conversation concentrates heavily on Tibet’s relationship with China; the alarming number of self immolations as a protest against the Chinese invasion; religious violence on a global scale; religious intolerance; economic deprivation and the nature of ‘one true God’. It was one of a series of discussions built around ‘Ethics for a Whole World’ presented by the Sydney Peace Foundation.

A Dialogue With Arab Women 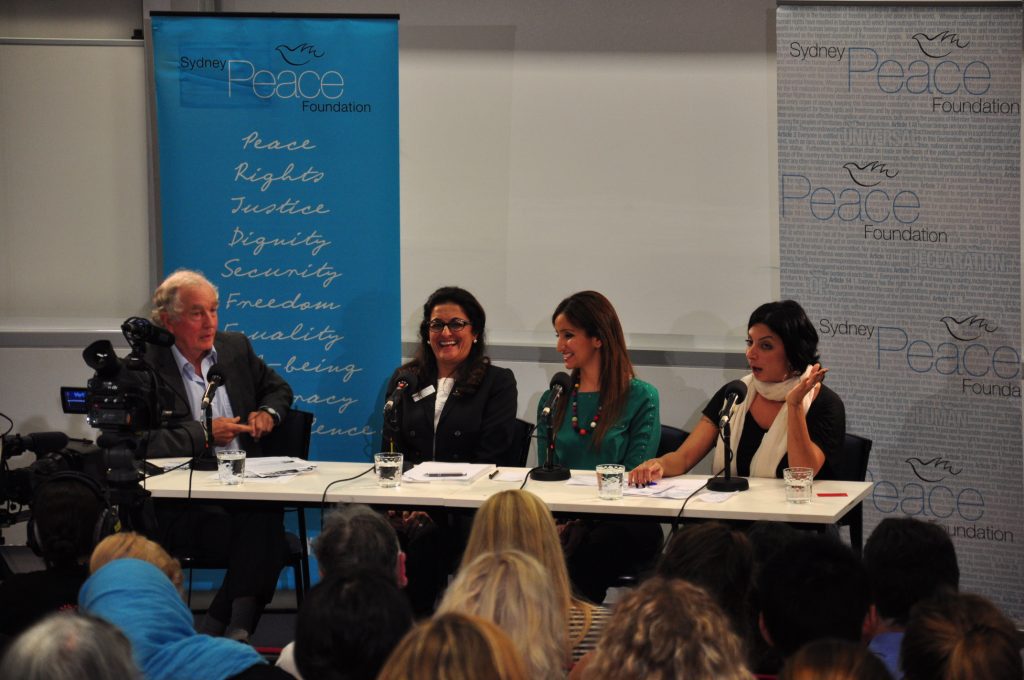 This is a lineup of some very impressive women. They are Zeina Daccache, a clinical psychologist from Lebanon; Manal Elattir from Morocco who co-founded the first NGO in social entrepreneurship, and Dr Houriya al-Kazim, a breast surgeon from the United Arab Emirates.

The three of them are outstanding in their fields and great activists and motivators. They’ve got clear eyed, unromantic, non-ideological views of the political and gender based machinations and repressions in their own countries.

All of them did their tertiary education overseas; but they’ve all come back to work, because they all believe they can implement change from within.

Houriya al-Kazim was until recently, the only breast surgeon in the UAE. She did her medical training in Dublin, and was horrified when she came home to see so many advanced cases of unattended breast cancer.

And the reasons? She was working against very rigid conventions of women not being at all comfortable doing self examinations, and certainly not removing their clothes for a medical examination before a male doctor.

Remember Houriya was until recently the only female breast surgeon in her country and she was not permitted to use the word ‘breast’. She had to say ‘chest’! This was only the first obstacle.

This is a terrific conversation between three tenacious, funny and sophisticated women – you’d want them on your side . In any political debate or brawl.

Stuart Rees, the CEO with the Sydney Peace Foundation, does a good job as the moderator.

NOTE: The above text has been copied and occasionally adapted from summaries on ABC Big Ideas websites.