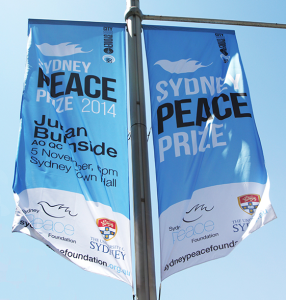 A copy of Julian’s written speech “Without justice there will not be peace” can be downloaded here.

Photos of the events can be found on the Sydney Peace Foundation Facebook Albums.

25 November 2014, Sydney Peace Prize – Without Justice There Will Not Be Peace, Carolyn McDowall, The Culture Concept Circle

On Tuesday 27 May 2014, the Sydney Peace Foundation officially announced that Julian Burnside AO QC has been selected to receive the 2014 Sydney Peace Prize. Some coverage of the announcement included:

Highlights from Julian Burnside’s advocacy and articles in 2014:

7 April 2014, The reality of boat people and a solution to the asylum seeker “problem”, Julian Burnside

17 March 2014, How we treat the vulnerable is a moral test beyond politics, Julian Burnside, The Conversation (online news)