For the music lover and theatre enthusiast alike, the Kinetic Energy Theatre Company’s coming season of EMPIRE offers an engaging night out.

Hot off the creative drawing board, this latest and updated generation of our acclaimed play will hit the stage when Bradley Manning’s court martial will be in full swing: July 10-13 (at St Luke’s Hall in Enmore).

Empire tackles the questions arising from the leak of the Collateral Murder video and hundreds of thousands of secret US State Department cables by whistle-blower Bradley Manning to WikiLeaks. The play draws an arch right from the birth of the “Idea of America” to the US Empire’s present day excesses.

To address these issues Kinetic Energy have gone to two of the most eminent and elegant critics of the Empire – the writer activists Arundhati Roy and Noam Chomsky. Two of Roy’s recent political essays are the starting point: “The Loneliness of Noam Chomsky”, and: “Confronting Empire”. Kinetic Energy adapted these essays for the stage and have laced them with Chomsky’s commentaries on the subject of Empire. Using contemporary documentary film technique, we have woven dramatic reenactment together with narration, video & audio footage, and live music.

The play demonstrates the company’s unique style once described by Richard Glover in the SMH as: “Different to anything you’ll see elsewhere.” And by Paul McGillick in the Australian Financial Review as: ”Work with the kind of conviction and focus which fists you right between the eyes.”

We live in an Orwellian world. And yet, despite the most heinous crimes against nature and humanity, hope that another world is possible springs eternal. Alternatives are being created, and all around the globe people are uniting in their demand for justice and peace.

Kinetic Energy take the audience on a trip across American history. From early colonists like the Puritans in Massachusetts Bay (later Boston), and the preachings of founding father John Winthrop, to the post World War II period and the establishment of the US hegemony.

This timeline is punctuated by scenes on the golf course, where president George W. Bush makes some of his most famous statements on foreign policy, revealing the debt he owes to his Texan religious upbringing and American mythology like the Battle of the Alamo.

A third timeline follows the internet conversations between Bradley Manning from his work station in Baghdad, and ex-hacker Adrian Lamo. Kinetic Energy reproduce an edited version live on stage, based on the logs of these talks. Ultimately, these chats led to Lamo turning Manning in to the US military.

While Bradley Manning’s court martial is in full swing, WikiLeaks co-founder Julian Assange is sheltering in the Ecuadorean embassy in London to avoid extradition to Sweden and possibly the USA, and all efforts are being made by the powers that be to shut down WikiLeaks.

On opening night (10/7) Em.Prof. Stuart Rees (chair of the Sydney Peace Foundation) will be a special guest opening the show.

In answer to Arundhati Roy’s call for resistance to the current Empire, we have invited a range of guests, with strong links to the subject matter, to respond to the show in their own special way.

11th: Darrio Phillips & Angela Canalese
Darrio is a pioneer of street dancing and Krump in Australia. Angela is a free styling dance nomad. For them, dance is all about freedom.

12th: Fightin’ Father Dave
As minister of the Anglican Holy Trinity Church in Dulwich Hill, Fr Dave Smith is renowned for his social justice work, particularly the rehabilitation of youths off the streets. And dancers Darrio Phillips & Angela Canalese will appear once more. 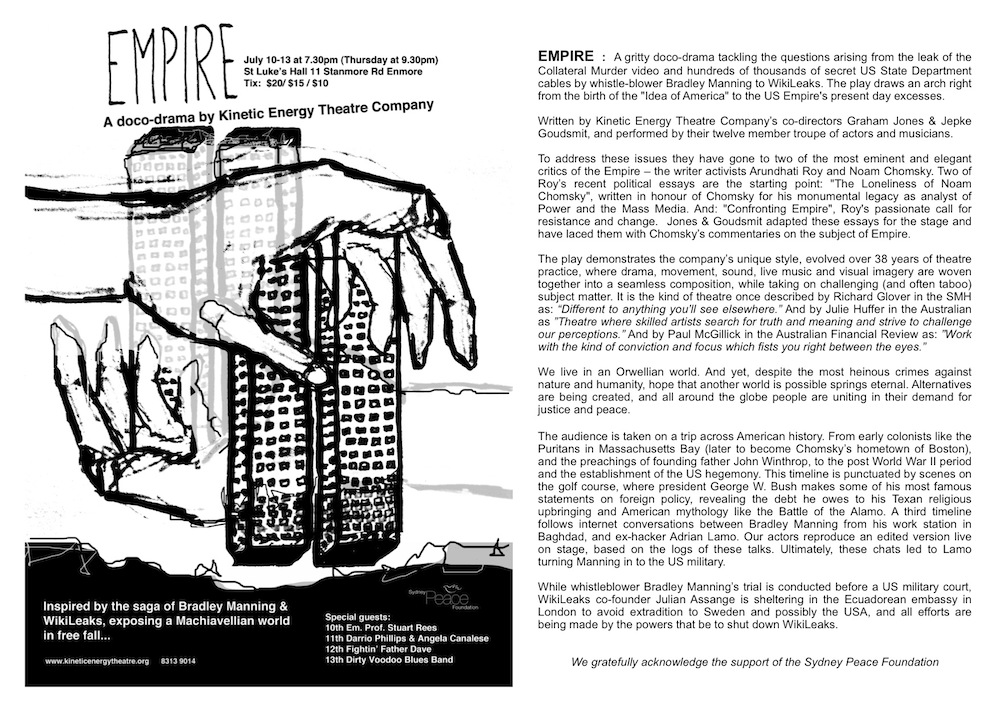 The Café will be serving yummy winter food, drinks and other delights