Film screening this Friday: The Ghosts of Jeju

You are invited to a screening of:

THE GHOSTS OF JEJU 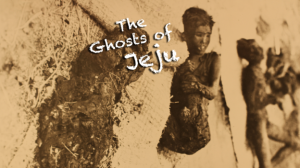 A moving film about the determined resistance by the fishermen and farmers of Gangjeong (pop. 1800), a village on Jeju Island in Korea, against the construction of a massive naval base to accommodate America’s military pivot to Asia. The villagers and their supporters have been fighting 24 hours a day, 7 days a week for six years to stop the construction.

Jeju Island, known as Korea’s tropical paradise, is home to one of the world’s richest biodiversity systems and has more UNESCO World Natural Heritage sites than any other single location..

In 2005, Jeju was christened the “Island of World Peace,” by way of apology for a brutal massacre that took place there in 1948.

Little did I realize what I stumbled into. Compared to the relatively short-lived Occupy demonstrations in the States, I wondered what had sustained these brave, peaceful people for five years when they have been subjected to the brutal repression of hundreds of police and security guards.

What I didn’t learn in my history classes was the role the U.S. Army played in the massacre of as many as 60,000 peasants on Jeju from 1948-1951. Because these fiercely independent people rebelled against the American occupation and the imposition of Sigman Rhee, a brutal dictator, they were labeled Communists.

Recently revealed secret and classified documents, film and photos prove that the Americans equippped the Korean army and police, trained them, provided intelligence, and planned and directed the scorched earth assault on these innocent men, women and children.

Only after visiting the Peace Museum on Jeju commemorating the massacre which began on April 3, 1948, did I understand the meaning of the protest and the perseverance and resolve of the people of Gangjeong and their supporters, many of whom survived the massacre and the others are immediate descendants of that horrific period.

Then, as now, the people of Jeju are fighting for self-determination, basic human rights, an open and transparent democratic process, and the protection of this rare and beautiful environment.

My film places the 5-year old struggle in the context of America’s global military imperial domination of the planet through unrestrained and overwhelming force. Once again, the people of Jeju find themselves in the cross hairs of war between more powerful empires. And yet, the indomitable spirit of the Villagers and their supporters, who have not lost hope in spite of overwhelming odds, will inspire and motivate everyone who believes there is a better way to live together on this planet.