for exposing injustice for over 45 years as a humanist artist, activist and filmmaker, for his courage to witness and confront violence in the war zones of the world, for enlisting the arts to subdue aggression and for enlivening the creative spirit to promote tolerance, respect and peace with justice. (2015 Sydney Peace Prize Jury citation) 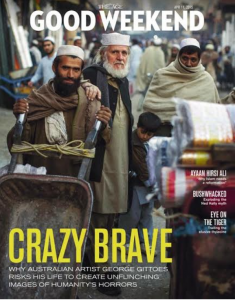 Gittoes returned to Sydney from Afghanistan for the occasion (courtesy of Singapore Airlines) and his words resonated strongly with the Australian media.

Media coverage of the announcement:

On Saturday 11 April the Sydney Peace Foundation announced that George Gittoes would receive the 2015 Sydney Peace Prize. Here are some links to the media coverage of the announcement so far: