Below is a selection of books, films, advocacy work and interviews from and by Naomi Klein, one of the world’s leading voices on climate change and climate justice.

With her most recent work on This Changes Everything and The Leap Manifesto, Naomi Klein has inspired thousands of people across the world to stand up and take action.

From wars over water to fires and floods, climate change destroys livelihoods and is displacing thousands. It is inherently linked to violence and suffering across the world. If we want to achieve peace, we cannot ignore climate change.

For Klein, climate change is an opportunity to right the wrongs committed in the name of the economy. A catalyst for change – away from fossil fuels and “predatory economics”, to a system that cares for people and planet. Naomi Klein shows us another path forward, away from exploitation and towards peace and justice.

Klein is a contributing editor for Harper’s and reporter for Rolling Stone, and writes a regular column for The Nation. In 2004, her reporting from Iraq for Harper’s won the James Aronson Award for Social Justice Journalism. Additionally, her writing has appeared in The New York Times, The Washington Post, Newsweek, The Los Angeles Times, The Globe and Mail, El Pais, L’Espresso and The New Statesman, among many other publications. In 2014 she received the International Studies Association’s IPE Outstanding Activist-Scholar award, and in 2015 she received The Izzy Award honouring outstanding achievement in independent journalism and media. She holds an honorary Doctor of Civil Laws from the University of King’s College, Nova Scotia. She is a Puffin Foundation Writing Fellow at The Nation Institute and a former Miliband Fellow at the London School of Economics.

2014: This Changes Everything – Capitalism vs. The Climate

Klein’s critically acclaimed book, This Changes Everything: Capitalism vs. the Climate argues that climate change is an alarm that calls us to fix an economic system that is already failing us in many ways.

Klein meticulously builds the case for how massively reducing our greenhouse emissions is our best chance to simultaneously reduce gaping inequalities, re-imagine our broken democracies, and rebuild our gutted local economies. She demonstrates precisely why the market has not—and cannot—fix the climate crisis.

2007: The Shock Doctrine – The Rise of Disaster Capitalism

In The Shock Doctrine, Naomi Klein explores the myth that the global free market triumphed democratically.

Based on breakthrough historical research and four years of on-the-ground reporting in disaster zones, The Shock Doctrine vividly demonstrates the workings of disaster capitalism – the rapid-fire corporate re engineering of societies reeling from shock. It explains how neoliberal ideology seizes moments of social crisis to impose “shock therapy”, transferring public resources into the hands of the wealthy and demanding austerity of ordinary citizens.

Naomi Klein’s first book No Logo: Taking Aim at the Brand Bullies was dubbed “a movement bible” by The New York Times.

Equal parts cultural analysis, political manifesto, mall-rat memoir, and journalistic exposé, No Logo is the first book to put the new resistance into pop-historical and clear economic perspective. It tells a story of rebellion and self-determination in the face of our new branded world. 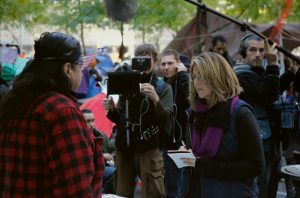 Filmed over 211 shoot days in nine countries and five continents over four years, This Changes Everything is an epic attempt to re-imagine the vast challenge of climate change.

Directed by Avi Lewis, and inspired by Naomi Klein’s international non-fiction bestsellerThis Changes Everything, the film presents seven powerful portraits of communities on the front lines, from Montana’s Powder River Basin to the Alberta Tar Sands, from the coast of South India to Beijing and beyond.

Interwoven with these stories of struggle is Klein’s narration, connecting the carbon in the air with the economic system that put it there. Throughout the film, Klein builds to her most controversial and exciting idea: that we can seize the existential crisis of climate change to transform our failed economic system into something radically better.

This documentary adaptation Naomi Klein’s 2007 book, The Shock Doctrine investigates disaster capitalism, based on Klein’s proposition that neo-liberal capitalism feeds on natural disasters, war and terror to establish its dominance.

Based on breakthrough historical research and four years of on-the-ground reporting in disaster zones, The Shock Doctrine vividly shows how disaster capitalism – the rapid-fire corporate re-engineering of societies still reeling from shock – did not begin with September 11, 2001.

The films traces its origins back fifty years, to the University of Chicago under Milton Friedman, which produced many of the leading neo-conservative and neo-liberal thinkers whose influence is still profound in Washington today.

New, surprising connections are drawn between economic policy, shock and awe warfare and covert CIA-funded experiments in electroshock and sensory deprivation in the 1950s, research that helped write the torture manuals used today in Guantanamo Bay.

The Shock Doctrine follows the application of these ideas through our contemporary history, showing in riveting detail how well-known events of the recent past have been deliberate, active theatres for the shock doctrine, among them: Pinochet’s coup in Chile in 1973, the Falklands War in 1982, the Tiananmen Square Massacre in 1989, the collapse of the Soviet Union in 1991, the Asian Financial crisis in 1997 and Hurricane Mitch in 1998.

In the wake of Argentina’s dramatic economic collapse in 2001, Latin America’s most prosperous middle class finds itself in a ghost town of abandoned factories and mass unemployment. The Forja auto plant lies dormant until its former employees take action. They’re part of a daring new movement of workers who are occupying bankrupt businesses and creating jobs in the ruins of the failed system.

But Freddy, the president of the new worker’s co-operative, and Lalo, the political powerhouse from the Movement of Recovered Companies, know that their success is far from secure. Like every workplace occupation, they have to run the gauntlet of courts, cops and politicians who can either give their project legal protection or violently evict them from the factory.

The story of the workers’ struggle is set against the dramatic backdrop of a crucial presidential election in Argentina, in which 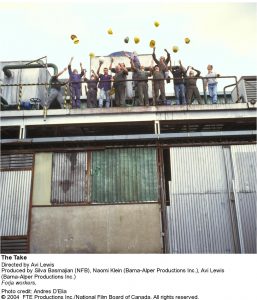 the architect of the economic collapse, Carlos Menem, is the front-runner. His cronies, the former owners, are circling: if he wins, they’ll take back the companies that the movement has worked so hard to revive.

Armed only with slingshots and an abiding faith in shop-floor democracy, the workers face off against the bosses, bankers and a whole system that sees their beloved factories as nothing more than scrap metal for sale.

With The Take, director Avi Lewis, one of Canada’s most outspoken journalists, and writer Naomi Klein, author of the international bestseller No Logo, champion a radical economic manifesto for the 21st century. But what shines through in the film is the simple drama of workers’ lives and their struggle: the demand for dignity and the searing injustice of dignity denied.

18 November, 2015, Why a Climate Deal is the Best Hope for Peace, Jason Box and Naomi Klein, The New Yorker

28 August, Change Everything or Face a Global Katrina, Naomi Klein

Naomi Klein: Capitalism and the Climate, Festival of Dangerous Ideas 2015

Naomi Klein on Paris Summit: Leaders’ Inaction on Climate Crisis is “Violence” Against the Planet | 2015