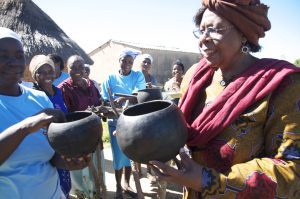 In any country whose people have experienced violence at every level of their lives – social, cultural, environmental, economic, and political – courageous advocates of non-violence and reconciliation represent the only path to peace with justice. In Zimbabwe, three such people bear witness to this truth.

Because I was for democracy I was tortured almost to death, my ribs and arm broken. A female police officer was the worst of the torturers and the young security man who broke my arm with a crowbar has since committed suicide. I need long term medical attention but my country also needs healing. How?

Allan Savory, former politician, farmer, biologist and guerrilla fighter for Zimbabwean independence and now the director of the African Centre for Holistic Management on the Dimbanganbe ranch adjacent to Victoria Falls, explains his aims:

To empower communities and improve the lives of future generations by restoring their land and  natural water resources. If we do not do that, wars over water will be far worse than wars over oil. People and land need healing which is all inclusive – holistic.

It is painful when you go back as an adult to the places where you played as a child, to creeks where you swam, and you discover that such places have become a pile of sand. To help the people and to prevent further violence, we need to heal the land as well as ourselves.

Sekai, Allan and Isaac are sensitive to human dignity, each committed to equal opportunity for all citizens, each speaking the language of non-violence – for people, the land, and animals.

Each recognises the lessons taught by generations of Australian Aboriginal land rights campaigners that people’s identity and health is closely associated with their access to and their stewardship of the land.

As a student in Australia in the 1970s, Sekai Holland cofounded the Australian anti-apartheid movement, campaigned for Aboriginal land rights, and then returned to Zimbabwe to work for social justice, and in particular for the empowerment of women.

Now in the cabinet of president Robert Mugabe of ZANUPF and prime minister Morgan Tsvangirai of the Movement for Democratic Change (MDC), Sekai is a co-minister for healing, reconciliation and integration. She explains that this title is long-winded because, “We are celebrating diversity, we need to be inclusive and consultative.”

In a country devastated by violence, poverty, cholera, AIDS, unreliable water supply, and by fragile food security, Sekai’s responsibilities are massive and her resources few.

In spite of such difficulties, the prescriptions for healing promoted by the likes of Sekai, Allan and Isaac are cause for optimism. Even if President Mugabe and his colleagues may be reluctant participants in a unity government, they merit credit for agreeing to the tripartite structure of the portfolio for healing which involves ministers from each of three parties.

This power-sharing arrangement is coupled to a code of conduct which aims to regulate the behaviour of politicians by encouraging them to express differences without resort to abuse, torture or killings. Sekai says that the language of non-violence is on official agendas: “Dialogue is more important than silver or gold.”

Sekai’s allies include Allan Savory and Isaac Chidavaenzi. Allan restores land, preserves water, and provides employment as rangers, herders, ranchers and cooks for over 130 local people. In wild African bush shared with elephants, lions, giraffe, water bucks and diverse bird life, along with domesticated herds of cattle sheep and goats, he shows how this holistic approach to living – “the opposite of mono cultures and industrialised, chemically aided agribusinesses” – has enhanced people’s sense of spiritual, cultural and economic coherence.

In a similar vein but on a much smaller scale, Isaac encourages peasant farmers to develop their lands; to move from dependency on food aid to become self-sufficient and so improve their children’s health and their own wellbeing. He is inspired by the work of an accomplished agricultural scientist, Dr Samuel Machena, the developer of a drought-resistant dwarf maize which is producing double and sometimes treble the yield of conventional maize.

Samuel sees land restoration as a key ingredient for sustainable livelihoods and thereby for national healing. “These processes are interdependent,” he says.

After being tortured by accomplices of people she now works with, Sekai was at first reluctant to be part of any unity government. She now recognises that in every context, the victims of violence have to live alongside the perpetrators; that those who brutalise others brutalise themselves; that the usual polarisation in political parties thwarts a country’s efforts to achieve healing.

Sekai and her husband Jim’s building of a highly supportive culture in their home resembles the ‘holistic management’ advocated by Allan Savory. In their rambling Harare bungalow, and for many years, they have cared for over 30 orphaned children. In the midst of the worst violence in the run-up to the second round of elections in 2008, they sheltered over 100 women and children.

In November this year, Sekai Holland will receive Australia’s international award for peace, the Sydney Peace Prize. She was chosen in part because she heeds and breathes that lesson written in lines from Denise Levertov’s poem, Making Peace:

A line of peace might appear if we restructured the sentence our lives are making,

revoked our affirmation of profit and power,

The success of brave individuals’ challenge to establishment policies and conventional views can be gauged by the attacks ranged against them.

Allan Savory’s practices are resisted by the academics and companies who argue that the efficient management of agriculture depends entirely on chemicals and technology. Isaac Chidvaenzi has been threatened by Zanupf supporters who seem to think that he is becoming popular by encouraging the cultivation of crops in areas usually regarded as their constituency. Sekai is attacked by self-styled human rights activists who say that she has been too slow to achieve reconciliation, a rather silly observation given that the violence inherent in Zimbabwe’s history makes it impossible to reach such a goal overnight.

In Australia, a chest-beating Leader of the Opposition chants ‘no, no, no’ and talk back radio hosts ridicule independent MPs for engaging in dialogue with Government. In spite of a strong Australian economy, low unemployment, and with human rights taken for granted, a greedy, whingeing culture persists, as though the goal of seeking more and more will always be more important than expressing satisfaction.

By contrast, I left Zimbabwe grateful for and cherishing the generosity of families who have almost nothing. I also remain impressed that, however great the difficulties in that country, politicians, trade unionists, and community leaders are working with former opponents to promote healing and reconciliation.

In Sydney on November 8 at the award of the 2012 Sydney Peace Prize to Sekai Holland, she will speak of lessons from Zimbabwe and we can express gratitude for her and her colleagues’ considerable courage and significant achievements.

This article was first published by ABC’s The Drum, 25th May 2012