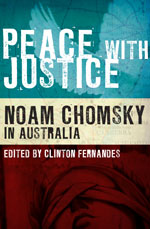 In November 2011, the cognitive scientist, philosopher and political activist Noam Chomsky arrived in Australia to receive the Sydney Peace Prize. He delivered lectures and answered questions about economics, history, international relations, linguistics, philosophy, justice and much more: What is unique about human language? How is it related to core components of human nature: cognition, moral judgment and other human activity? How can peace in the Middle East be achieved? What does the rise of China mean? What ought to be done about global economic problems? Is there a difference between a terrorist and a freedom fighter?

Chomsky’s intellectual stature has been compared to that of Galileo, Newton and Descartes. His influence has been felt in fields as diverse as artificial intelligence, cognitive neurology, music theory, anthropology, law and theology. His moral stature has been described as prophetic. He was the only scientist or philosopher on the White House ‘Enemies List.’ His Sydney Peace Prize citation reads, in part, ‘For inspiring the convictions of millions about a common humanity and for unfailing moral courage.’

This book is an edited reconstruction of extemporaneous talks, informal notes, interviews and transcripts during his few days in Sydney, Melbourne and Adelaide.

In conversation with Peter Slezak

MC’d by Stuart Rees from the Sydney Peace Foundation