‘In a time of violence and abuses of human rights, a brilliant, inspiring choice’ 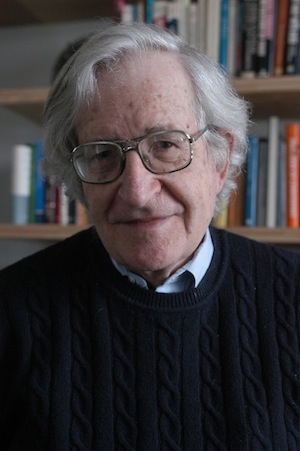 The Sydney jury’s citation for this award reads:

‘For inspiring the convictions of millions about a common humanity and for unfailing moral courage. For critical analysis of democracy and power, for challenging secrecy, censorship and violence and for creating hope through scholarship and activism to promote the attainment of universal human rights.’

Speaking from his home in Boston, Professor Chomsky says, ‘I am honoured to receive this prestigious award. I very much look forward to coming to Sydney. I am also grateful to the Sydney Peace Foundation in their pursuit of justice, as in their recent award to Julian Assange for his courageous exercise of his responsibilities as a citizen of free societies.’

Director of the Sydney Peace Foundation, Professor Stuart Rees, says, ‘Professor Chomsky is one of the West’s most influential intellectuals in the cause of peace, the most significant challenger of unjust power. ‘This inspiring choice comes at a time of violence and protest around the world. Across the Middle East brave people challenge authoritarian rule, yearn for freedom and for a state of their own. Yet, in Australia, leading politicians are still to find the courage to craft policies, such as those affecting refugees and asylum seekers, which reflect the hopes and standards set by Chomsky’s life and work.

‘Come November 2011, I suspect thousands of people will not only take the opportunity to hear Professor Chomsky speak, but will also want to express their gratitude to him.’

Professor Chomsky will give the City of Sydney Peace Prize Lecture in the Sydney Town Hall on Wednesday 2 November, and will receive the $50,000 prize plus a hand-made glass trophy crafted by the Australian artist Brian Hirst, at a gala dinner held at the University of Sydney on Thursday 3 November.