By Jake Lynch, Director of the Centre for Peace and Conflict Studies:

There is a growing danger that the political leaders responsible for the greatest single atrocity of recent years will suffer no consequences. Journalists, not governments, have taken a lead in raising the issue to the international agenda of command responsibility for violations of humanitarian law in Sri Lanka.

The UK’s Channel Four has now screened the second of two hard-hitting documentaries, containing compelling visual evidence that civilians were knowingly targeted, and surrendering prisoners executed, on orders issued in a direct chain of command from the country’s president Mahinda Rajapaksa.

According to experts consulted by Channel 4, the manner of Balachandran’s wounds indicate he was executed at close range, with one expert speculating he was made to watch his bodyguards being killed before being shot himself. 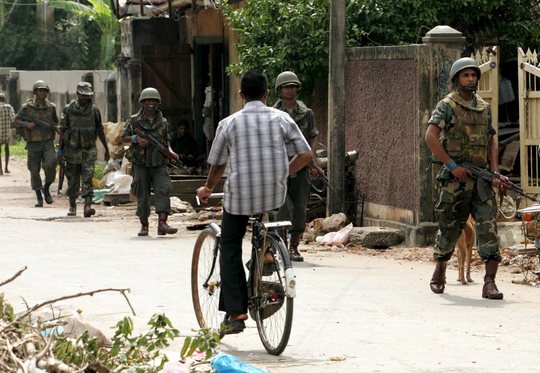 Out of step with the UN

Australia has never backed the call, originally made by the Office of the UN High Commissioner for Human Rights, for an independent, international investigation of war crimes allegations against both sides – the government and the Tamil Tigers – in the civil war.

As months dragged into years, DFAT hid behind the mantra that international actors had to wait for the Sri Lankan government to investigate itself, which it did in the form of the so-called Lessons Learned and Reconciliation Commission, which finally issued its report late last year.

But the LLRC report does not address the issue of command responsibility for military action resulting in avoidable civilian deaths. With the significant Tiger leaders all dead, the focus of any such investigation would be on the actions – and omissions – of the President and his senior ministers.

This problem cannot be adequately dealt with by Sri Lanka itself. A UN panel of experts, appointed by Secretary General Ban Ki Moon to examine evidence of war crimes, found that up to 40,000 Tamil civilians died as a result of bombing and shelling by government forces, or of a sheer lack of food and drinking water in the so-called “no fire zone”. Channel 4 reveals evidence that the government knowingly understated the numbers of people involved, thus under-calculating the amounts of supplies required to keep body and soul together.

Crucially, the UN panel report also noted that the country’s criminal law “does not expressly provide for … command or superior responsibility as a mode of liability of military commanders or civilian superiors for failing to prevent or punish crimes committed by subordinates”.

Between September 2008 and 19 May 2009, the UN report goes on, “the Sri Lanka Army advanced … into the Vanni [region] using large-scale and widespread shelling, causing large numbers of civilian deaths.”

Rajapaksa had given an order to stop shelling of a designated no-fire zone on April 27th. But a cable from the US Embassy, disclosed by Wikileaks, shows he was given a warning, backed by photographic evidence, that the attacks had continued after that date. This came when the President attended a meeting with senior diplomats on May 5th, along with Foreign Minister Palitha Kohona. Rajapaksa requested a briefing from the US Ambassador on the progress of the campaign, saying “you are probably better informed than I am”.

The Ambassador showed him satellite pictures of civilian areas in the zone, before and after the supposed ceasefire date, which revealed the effects of continuing bombardment. An Embassy note remarks, “Our effort still could lead to the President conducting his own inquiries and a possible change of the Sri Lankan Army’s conduct of the battle in progress.”

There is abundant evidence that no such change occurred. The UN panel provided detailed reports of shelling of a civilian installation, Mullivaikal hospital – in a no-fire zone designated by the Sri Lankan army – right up to May 19th.

Rajapaksa was explicitly warned that policies being carried out under his orders were resulting in the large-scale killing of civilians, but they continued for another two weeks, while he did not, apparently, lift a finger to stop them – making him potentially guilty of command responsibility for war crimes.

The LLRC report pronounces itself “satisfied that the military strategy to secure the LTTE [Tamil Tiger] held areas was one that was carefully conceived, in which the protection of the civilian population was given the highest priority.”

If there is not now a proper, independent investigation, carried out by internationals and under UN auspices, an atrocity will have been met with impunity, and that is a dire precedent for a government dealing with an internal conflict.

If such an investigation is now ordered – with support from countries like Australia – and if that results in, say, indictments by the International Criminal Court, would they do any good, in the context of the overall conflict?

How Australia should respond

The Tamils’ political aspirations have not gone away – drawing, as they do, on a historically transmitted and continuing collective experience of injustice. The Tamil National Alliance, which campaigns for strong regional autonomy, swept the board in recent local elections in the country’s north.

The demand for self-rule will have to be treated in some substantive way, if further violence in future is to be avoided. If Rajapaksa and senior colleagues were under threat of arrest, then prosecutions could be deferred as an incentive to negotiate, in good faith, on Tamil rights and freedoms. Criminal justice would have been traded off against political justice.

How will Australia respond? When, shortly before his failed leadership bid returned him to the back bench, I asked Kevin Rudd that question, he promised that his then department would be “mindful of the contents” of the UN report, and compare it with Sri Lanka’s own, when deciding what to do.

The theme of his remarks that evening was that Australia stands to benefit from an international order based on the rule of law. There could not be a more compelling case to put that principle into action.

Jake Lynch is Associate Professor and Director of the Centre for Peace and Conflict Studies at the University of Sydney.

This article was first published by The Conversation, 16/03/2012