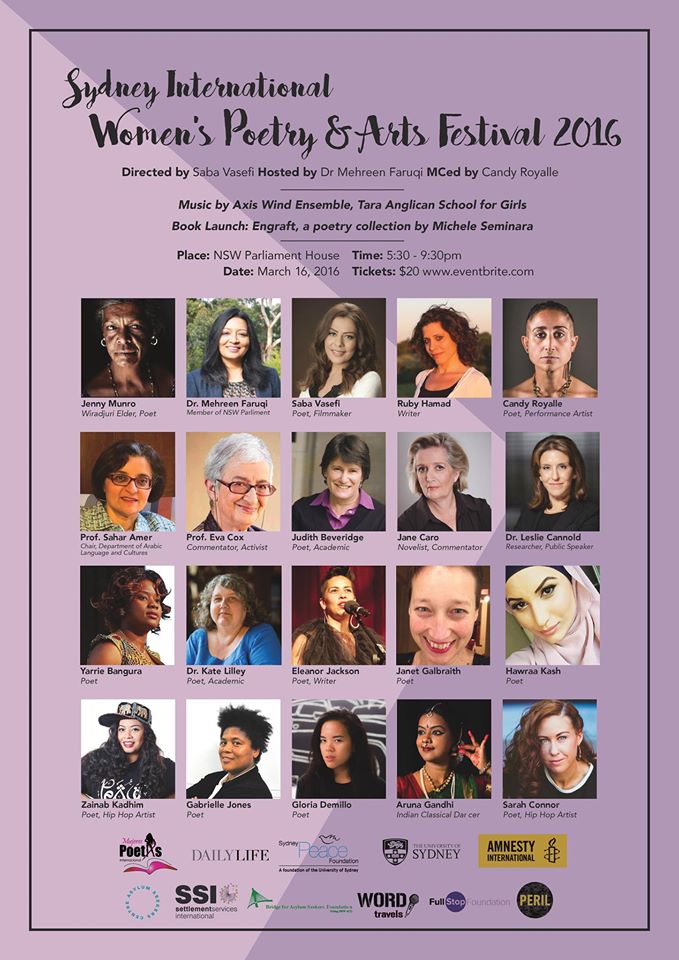 Sydney Peace Foundation, along with a number of other academic, human rights and feminist organisations, invite you to:

Sydney International Women’s Poetry and Arts Festival joins with the Women Poets International Movement (MPI) for the third year in a row to bring the Woman Scream Festival 2016 to Sydney. The Festival will take place at NSW Parliament House on March 16, 5:30-9:30pm. Woman Scream events are held in countries worldwide during the month of March. Last year the Festival was part of UNESCO’s 2015 International Year of Light.

One of the major feminist festivals in Sydney, the International Women’s Poetry and Arts Festival is directed by poet, filmmaker and Asylum Seekers Centre Ambassador, Saba Vasefi. It is hosted by member of the NSW Parliament Dr Mehreen Faruqi, and will be MCed by performer, writer and activist Candy Royalle. The Festival strives to honour and support female poets, writers and artists to reclaim their rightful place in literature and art by building coalitions based on solidarity, inclusion and diversity.

The Festival is a showcase of diversity, including performances by Indigenous, migrant, LGBTI and refugee, as well as Australian-born, women. It aims to foster a supportive atmosphere empowering women to stand up against racism, sexism and violence. It will shed light on the intersectional discrimination, masculine and racial biases which disempower women and damage society, while simultaneously emphasising the need to create new power structures and redefine what matters.

The event will support donations and promotion for its partners and will be advertised in Persian, Arabic, Chinese and English. Twenty complimentary tickets will be offered to women of Indigenous, refugee and asylum-seeker backgrounds.