It’s a good thing peace prizes are not given for results; hardly anyone would qualify.

Since 1901 the Nobel committee in Oslo has awarded the Nobel Peace Prize to 128 peace laureates.  The award recognises those who have tried, against the odds, to advance the cause of peace in an often violent and hostile world.

Organisations, rather than individuals, have also got the Nobel gong: for example Amnesty International and Medecins sans Frontiers (Doctors Without Borders).

Recipients aren’t always celebrities. Many lesser-known people working for causes like arms control and disarmament, humanitarian projects, negotiation and the peace movement have been recognised.

Respect for human rights is an essential ingredient to peace.  That is why this year’s co-winner of the Nobel Peace Prize was Pakistani schoolgirl Malala Yousafzai.

At the age of 17 Malala is the youngest ever Nobel laureate (the average age is 61) so she could hardly be said to have devoted a lifetime to the cause.  But she chose to put her young life at risk by insisting that girls have a right to an education.  The Taliban shot her in the head for her efforts.  Malala survived and is now a beacon of hope, an inspiration to millions who believe girls’ rights to an education equal to those of boys’. Education, as we know, is an essential step in creating a more peaceful world.

The Nobel committee is not the only one that awards an international peace prize.

Since 1998 the Sydney Peace Foundation, a foundation of the University of Sydney, has been awarding an international peace prize as well.

The first winner of the Sydney Peace Prize was a virtually unknown Bangladeshi banker, Muhammad Yunus.  He had the idea that in order to lift rural people out of crippling poverty they should be able to borrow money to start their own businesses.  So he set up the Grameen Bank, which provided microcredit loans, almost exclusively to women, to help them help themselves, their families and their communities.

The Sydney Peace Foundation found Yunus in 1998, eight years before he was found by the Nobel committee and awarded the Nobel Peace Prize in 2006.

The Sydney Peace Prize recognises those who have made a significant contribution to the ideals of peace with justice, respect for human rights and the philosophy, language and practice of non violence.

Beyond the acclaim and applause, the Sydney Peace Prize winner also delivers a public lecture that aims to enlighten, inspire and challenge Sydneysiders to think about big ideas like Peace. It’s a respite from our preoccupation with real estate prices or the latest sporting scandal.

The winner of the 2014 Sydney Peace Prize is Julian Burnside, AO, QC. His story is one of transformation from corporate lawyer for “the big end of town” to human rights advocate. 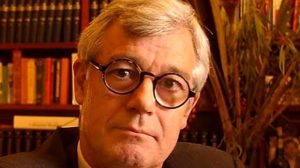 Most recently Julian Burnside has been arguing the case for asylum seekers who have arrived in Australia by boat fleeing conflict in their homelands.

Burnside has been a persistent thorn in the side for governments on both sides. He explains with infuriating calm how existing policies against asylum seekers are not just cruel but represent an astonishingly expensive legal and moral failure.

Burnside acted for the Victorian Council for Civil Liberties against the Australian government in the MV Tampa affair, arguing that Howard government’s treatment of those asylum seekers denied them rights afforded under the Migration Act and international treaties.  He is also a staunch opponent of indefinite, mandatory detention which current policy permits.

It has been an uphill battle all the way, but Burnside has been in the thick of it.  He is an inspiration to those of us who believe that Australians are better than those policies make us out to be.

The citation for Burnside’s award reads:  “For his brave and principled advocacy for human rights and for those wronged by government, for insisting that we respect our international legal obligations toward those seeking asylum, and for his unflinching defence of the rule of law as a means to achieve a more peaceful and just society.”

On the very day when we reflect on the accomplishments of Gough Whitlam, whose grand visions for a progressive, fairer and more tolerant Australia transformed this nation, it is fitting that we reclaim our better selves and move in a new direction.  Recognising Julian Burnside does that.

David Hirsch is a barrister and Chair of the Sydney Peace Foundation. Julian Burnside will deliver the City of Sydney Peace Prize Lecture at the Sydney Town Hall on Wednesday.

This was first published in the Sydney Morning Herald on 5 November 2014.
Read more: http://www.smh.com.au/comment/sydney-peace-prize-winner-julian-burnside-in-the-thick-of-battle-for-human-rights-20141103-11g4pm.html#ixzz3IELlE247