The Prisoner Who Freed A Nation

Nelson Mandela has passed away and South Africa and the world are poorer. Stuart Rees, chair of the Sydney Peace Foundation, recalls the life of a great man and his own meeting with Madiba

As the leader for a democratic South Africa and as an inspiration for civil rights activists around the globe, Nelson Mandela possessed the stamina and courage needed to overcome numerous adversities. These included escape from an arranged marriage, being outlawed and going underground, several trials, 27 years in prison, the isolation from his family and, on release, the responsibility to rectify the economic and social consequences of decades of apartheid.

Like any chieftain at ease with himself, he did not need to be assertive to convey authority. His human touch shone through humility and a self-deprecating humour. His charisma came from a certain majesty, as if showing that he had no need to remind anyone, himself included, of his status. In 2000, when he came to Sydney University’s Centre for Peace & Conflict Studies and honoured two of Australia’s most significant human rights campaigners, Indigenous leader Faith Bandler and Conflict Resolution founder Stella Cornelius, he explained, with a twinkle in his eye, that he had been Archbishop Desmond Tutu’s assistant, not the other way around.

Nelson Mandela was born in July 1918 in rural Transkei. At the age of nine, on the death of his father, he moved to the royal Thembu household to be groomed for high office, probably as counsellor to a chief. In that context he developed his interest in African history, realised the white man’s injustices and confronted, as he did throughout his life, the contradiction between respect for traditions and the realisation that black Africans needed power to govern themselves.

On leaving his rural home for Johannesburg he enrolled in a law degree at the largely white University of Witwatersrand. With his brilliant friend Oliver Tambo he set up a legal practice to provide free or low cost counsel to black Africans. In 1942 he joined the anti-apartheid movement.

Three particular sources convey the essence of Mandela’s values and vision: the speeches at his various trials, the solidarity cemented with fellow prisoners on Robben Island and his role in South Africa’s non-violent transition to democracy.

Attorney in the Courts

On reading the record of his speeches at his various trials in the early 1960s I witnessed a leader’s qualities:  courtesy combined with combativeness, dignity with defiance.

When Mandela and his co-defendants were charged with treason – for which he was eventually sentenced to life imprisonment – he explained his objective to campaign for a democratic society in which all people lived in harmony and enjoyed equal opportunities. “That”, he said, “is an ideal I hope to live for and to achieve. But if need be, it is an ideal for which I am prepared to die.”

In an earlier trial, when he was charged with organising a strike, Mandela was asked what he meant by equality before the law. He explained: “In its proper meaning, equality before the law means the right to participate in the making of laws by which one is governed.” He added, “I consider myself neither morally nor legally obliged to obey laws made by a parliament in which I am not represented.”

In prison on Robben Island Mandela and his fellow political prisoners practiced their Gandhi-like non-violence, self-discipline, civility to warders and to one another. In his autobiography, Long Walk To Freedom, he recalls, “We believed that hostility was self-defeating, that all men, even warders were capable of change.”  In my conversation with him he explained that, “In prison we realised we had two options. We could argue only with our emotions, but that way lay bitterness and recrimination. Or we could argue with our head with a view to working out ways to seek justice for everyone.”

In prison his courageous stand on principle contributed to his reputation as a leader and friend. When, in 1985, he refused President F W Botha’s offer of release from prison on the condition that he would give up his advocacy of armed struggle against apartheid, he replied, “Prisoners cannot enter into contracts. Only free men can negotiate.”

In the Bantu language, the term ubuntu refers to the interconnectedness of human beings, the notion that no human being exists in isolation, that qualities of humour and generosity derive from reciprocity in relationships and not from individuality. In this ubuntu spirit, Nelson Mandela would have considered it incorrect if any tribute was paid to him without reference to the key roles played in struggles against apartheid and for justice by his close comrades, such as Oliver Tambo, Winnie Mandela, his children, Archbishop Tutu and his third wife Graca Machel.

His activities since becoming President were characterised by efforts to heal the wrongs of the past – ensuring the right to vote, striving for social and economic equality, insisting that Aids was a normal illness, that sufferers, such as his son Makgatho, should not be discriminated against.

In spite of the enormous difficulties of post-Mandela South Africa in dealing with poverty, unemployment and housing, this giant figure of history, known affectionately by his clan name Madiba, remains an inimitable political leader, the adored father of a nation, the symbol of civility, a source of hope.

When Mandela fell seriously ill last year, the manager of the Mandela Family Restaurant in Soweto spoke for her community when she said, “He means everything to us.” Interviewed on the same television program, a nine-year-old boy replied with Mandela-like thoughtfulness and gentility, “He is a leader. He is beautiful. I love him.”

Emeritus Professor Stuart Rees is the Chair of the Sydney Peace Foundation.

This article was first published in New Matilda on 6 December 2013. 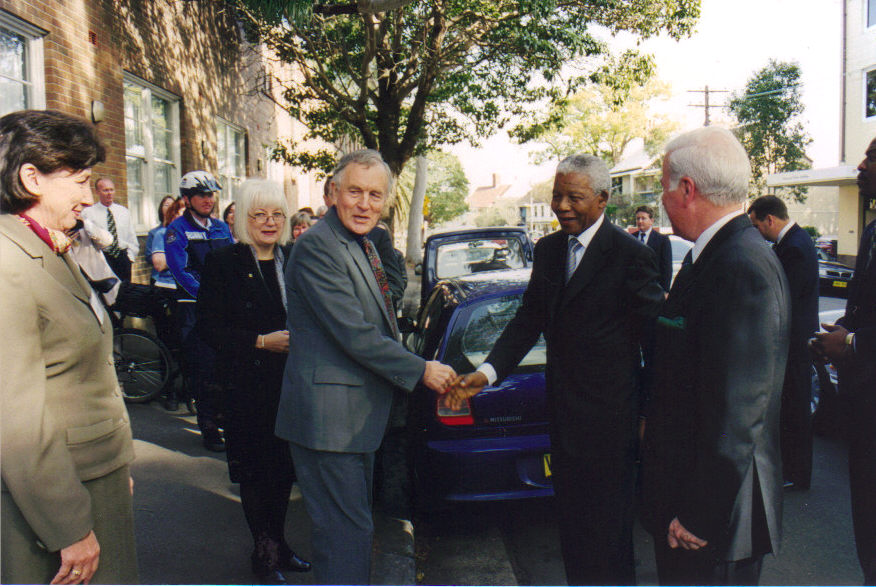