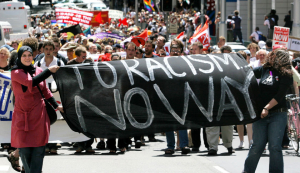 An important public meeting, “Communities United against Racism – Stop the Politics of Fear”, will be held on the afternoon of Sunday November 9 at the University of Technology, Sydney (UTS).

The Abbott Government has now sent Australia to war in Iraq, and has also recently conducted theatrical raids in the Muslim community. This is inflaming Islamophobia and racism and generating a climate of fear and hatred in our community. Racism strikes at the foundation of our society, and the government’s new anti-terror laws pose a serious threat to our civil rights.

Organized by a coalition of human-rights and antiracism activists, the November 9 meeting is intended to send a powerful community message: Islamophobia, like all other kinds of racism, will not be tolerated in our society. We condemn the government’s attempt to inflame it and reject its politics of fear.

The meeting will be addressed by a range of speakers who represent the diversity of our community:

It will be chaired by Mehreen Faruqi, NSW MLC. At the meeting we will move a resolution condemning racism.

It is up to us, the community, to speak out unequivocally against Islamophobia. Join us at the meeting from 3-5pm on Sunday, November 9 in the Tower Building at UTS, on Broadway near Railway Square, to reject fear-mongering, express our solidarity with Muslims, and discuss what can be done to combat racist violence and Islamophobia in our society. Signs at the entrance will clearly direct you to the meeting venue.