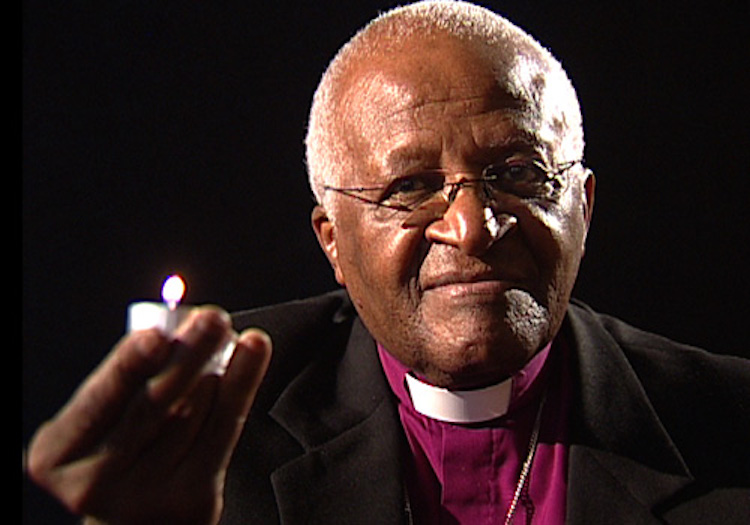 By Brian Rusch, Executive Director of the Desmond Tutu Foundation for the Huffington Post on December 31st, 2016.

1. “If you are neutral in situations of injustice, you have chosen the side of the oppressor.”

We have all been here. We have seen someone not being treated fairly and made the conscious decision to NOT get involved. After all, it’s not our business, is it? Actually, yes, yes it it is. Apartheid, The Holocaust, the illegal occupation of countries, the Syrian refugee crisis – it is pretty easy to find a situation in the world where people are being oppressed. To stand by and do nothing while this is happening – this is no different than telling the aggressor, “I support you.” 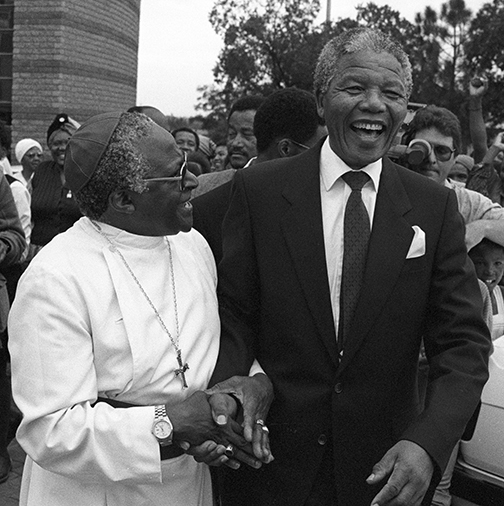 2. “Without forgiveness, there can be no future for a relationship between individuals or within and between nations.”

What does it take to forgive? Our society tend to be one based on revenge and retribution. One of the greatest gifts that Archbishop Tutu helped to share with the world is that there is another way through forgiveness. Forgiveness is difficult. Archbishop Tutu’s granddaughter, Nyaniso Tutu-Burris, described forgiveness as an “ongoing process”. Every day you need to wake up and make the decision to forgive again. The Archbishop has written whole books on forgiveness: “Forgiveness is not forgetting; it is actually remembering -remembering and not using your right to hit back. Its a second chance for a new beginning. And the remembering part is particularly important. Especially if you don’t want to repeat what happened.”

3. “Religion is like a knife: you can either use it to cut bread, or stick in someone’s back.”

From Christians to Muslims to Atheists, people will argue that “other” religions cause so much of the unrest in the world today – and that isn’t necessarily wrong. But what if one uses the tenets of their faith, those based on love and compassion, to share experiences with peoples of other faiths? I have been very fortunate in my life to have worked alongside two great men of faith – the Archbishop and His Holiness the Dalai Lama. This year, with their release of The Book of Joy, I was reminded of that deep, profound friendship between the two men – two men from radically different faiths, who have come together to share with the world the peace and harmony that can be found through friendship, not despite of their differences, but because of them. As the Archbishop has said many times, “We must be ready to learn from one another, not claiming that we alone possess all truth and that somehow we have a corner on God.” 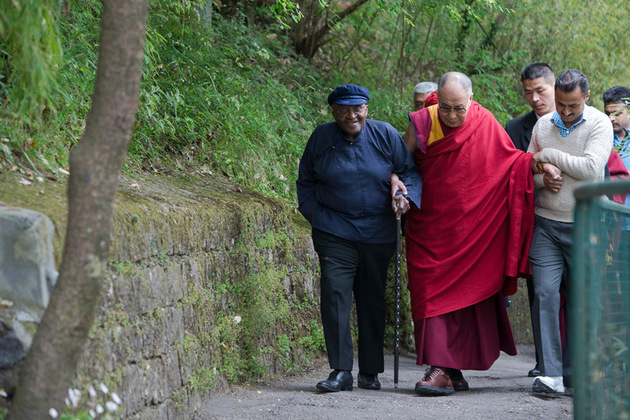 4.  “Resentment and anger are bad for your blood pressure and your digestion.”

While the Archbishop is known for his sense of humor and this is somewhat tongue-in-cheek, There is a great deal of wisdom. A friend of the Foundation found himself getting so upset on social media because of comments that others were making that he disagreed with. Throughout the election cycle of the last year, he would spend hours upon hours arguing with friends of friends, or even complete strangers, with the end result being only that he felt more tense. I suggested to him that perhaps he just acknowledge to himself that a particular comment upset him, but then move on. He recently sent a message to me that this path has allowed him to have more time to work with youth and spend less time arguing on social media – and he feels more relaxed and energized. 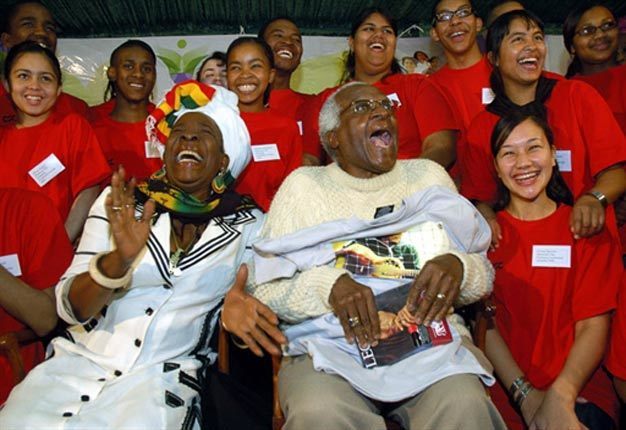 Desmond Tutu shares a laugh with Rita Marley, wife of Bob Marley, during a meeting with 20 young people.

5. “Do your little bit of good where you are; it’s those little bits of good that overwhelm the world.”

After a recent Peace3 event at Stanford University, a student came up and started to explain that with all the tragedy in the world, she felt overwhelmed by everything that she perceived needed to happen to make this world a better place. While it is true that sometimes the task at making an impact in the world can seem daunting, it doesn’t mean that we shouldn’t still try. It has been said that as one person, you might not be able to change the world, but you can change the world for one person. What can you do to make an impact in the life of one person in this new year? 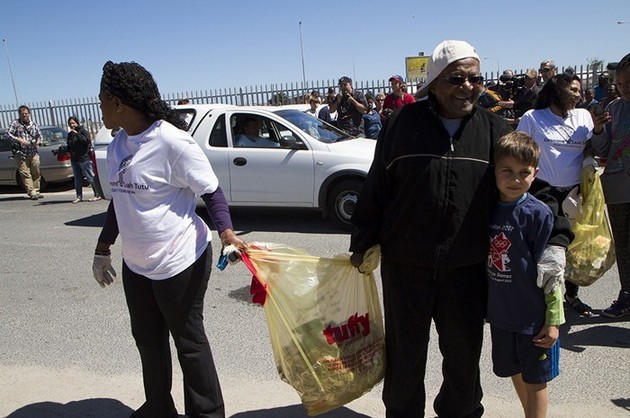 Reverend Canon Mpho Tutu and the Archbishop are joined by young people to collect trash in one of the townships outside of Cape Town.

6.  “Hope is being able to see there is light despite all of the darkness.”

2016 has been a rough year for a lot of people. One thing that I keep seeing over and over again is people claiming that others seem to have lost their humanity or that the world has become a crueler place this year. I wholeheartedly reject this premise. Racism, xenophobia, homophobia, misogyny… so many of these horrible things are very visible but they were always there. Now more of us just know it.

But there is a light. I think back to earlier this month when 130 high school students gathered with me in St. Paul’s Chapel to start identifying issues in their community and what steps they could make to resolve them. I think of the hundreds of people (both women AND men) who are planning their trip for the Women’s March on Washington. I remember how people came together after the shootings in Orlando. This last year has definitely shown the ugly underbelly of what humans can think and do, but it is the response that others are having to that darkness that is the light that continues to give me hope. 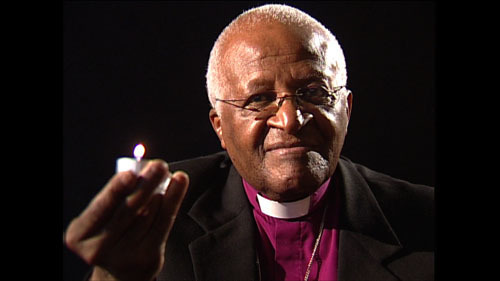 Archbishop Tutu lights a candle for the survivors of genocide in Rwanda.

If you follow the election cycles of most any country, you might think that the individual or group that is the loudest is the most successful. But history has shown us time and time again that the best way to sway people to your way of thinking is not to be louder, but to be stronger with your argument. In the short term, the few may be influenced by shouting, in the long term, the many will stand with wisdom. 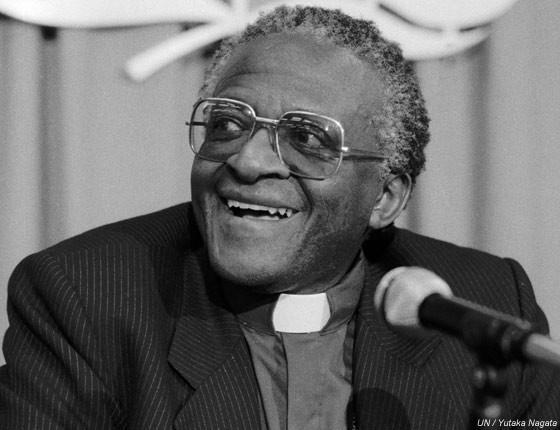 Robert V. Taylor, the President of the Desmond Tutu Peace Foundation, is a regular contributor to Fox News. As a fairly liberal activist for social justice, his message contradicts the norm for what most people think would be typical content for Fox. But Robert understands something important, you don’t create peace by talking with people that agree with you, that have the same opinions as you. Peace comes from having a dialogue with people that are different than you. Maybe not necessarily your “enemies” but that have different world views, different life experiences. 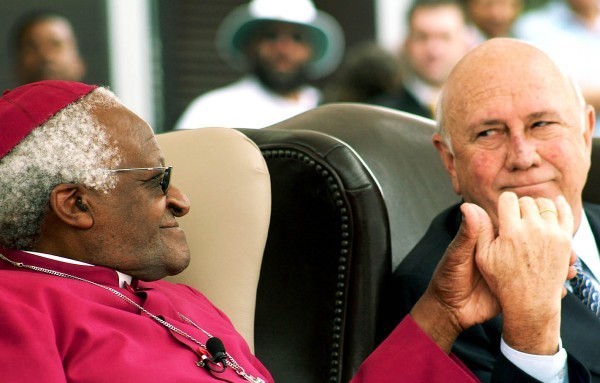 9. “Differences are not intended to separate, to alienate. We are different precisely in order to realize our need of one another.”

Throughout history, people have tried to use our differences to create division. Sometimes you hear someone mention how we need to just all realize that we are the same. But we aren’t. Each and every one of us is an individual, we are all different. Sometimes those differences are easily distinguished, but other times, those differences are hidden. What is clear, is that these differences are what make our society beautiful. It is like a rainbow – do we look at the rainbow and think, “I wish that was all red.” No! We look at the beauty of all of the colors, working together to create a thing of beauty, and realize without any one part of the rainbow, it would be something completely different. 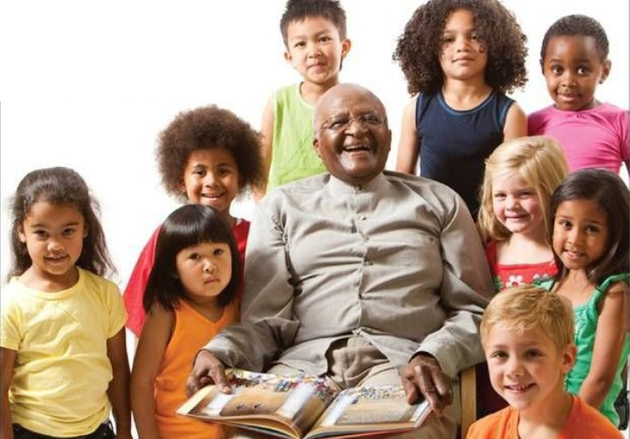 10.  “Ubuntu… my humanity is caught up, is inextricably bound up in what is yours.”

One of the greatest issues with mankind is the issue of “they/them”. It is easy to demonize “them”. ‘They” are taking our jobs, “they” are ruining the moral fabric of society, “they” want to attack us. But who is this “them”? “They are people. People like you and me. People with families and jobs and hopes and dreams – just like us. Recognizing that “they” are also people is the beginning of trying to understand their views. The Archbishop has said, “A person is a person through other persons. None of us comes into the world fully formed. We would not know how to think, or walk, or speak, or behave as human beings unless we learned it from other human beings. We need other human beings in order to be human. I am because other people are. A person is entitled to a stable community life, and the first of these communities is the family.” 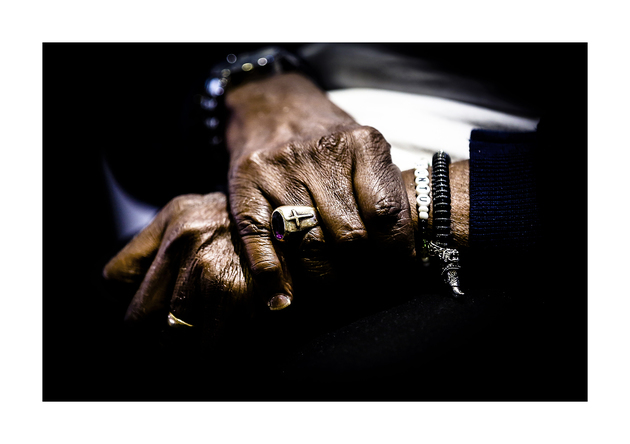 This is one of my favorite Archbishop quotes. Why? Because it it speaks to the fact that no matter what is going on in our lives, there is still a place for humor. Take time to laugh, to realize that it isn’t all serious, and that by experiencing joy, that joy spreads out to others.