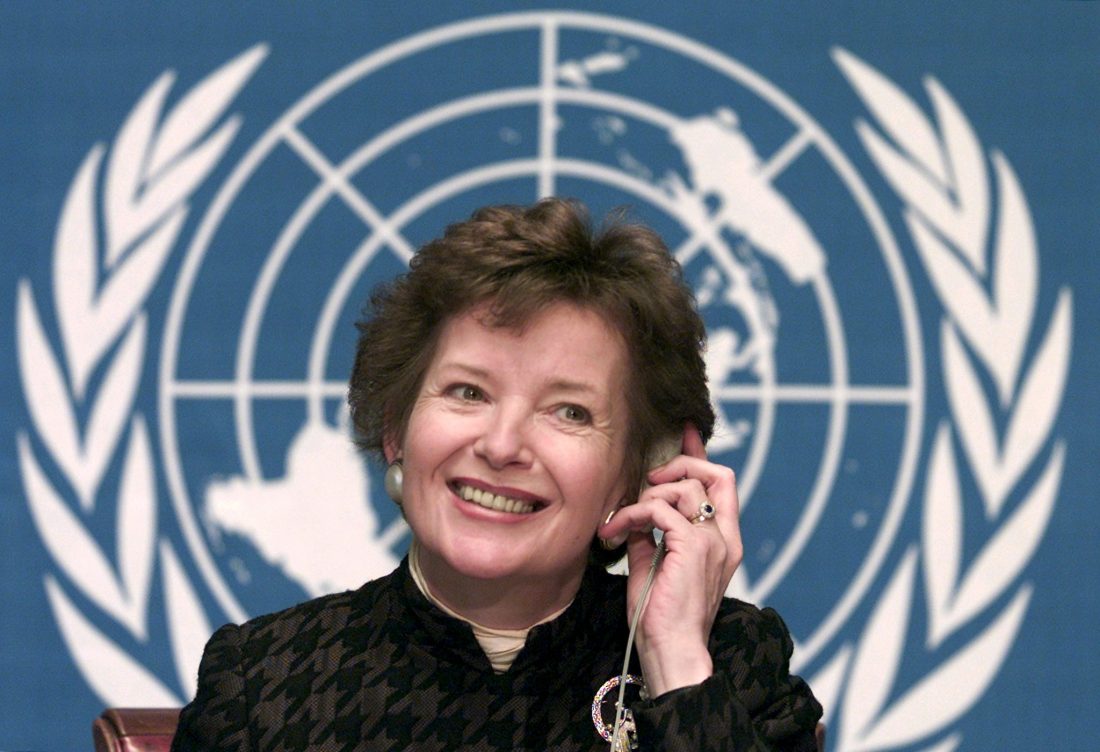 KERRY O’BRIEN: Outspoken former Irish president Mary Robinson would not have been mourned in either Washington or Canberra when she left her job as UN High Commissioner for Human Rights two months ago.

She had put the spotlight on both America and Australia for alleged human rights transgressions during her five controversial years in the job — along with Russia and China, and a string of third world offenders.

In Australia’s case, she annoyed the government by sending an envoy to investigate claims that they were in breach of the human rights convention by detaining the children of asylum seekers in Woomera.

Ironically, Mary Robinson is to be awarded the Sydney Peace Prize tomorrow night for “consistent support of the world’s vulnerable and disadvantaged”, and I spoke with her in Sydney earlier today.

KERRY O’BRIEN: Mary Robinson, you obviously had many frustrations as UN Human Rights Commissioner. But have you walked away with concrete definable achievements that made the job worthwhile?

The intellectual leadership on areas of economic and social rights, bringing a human rights analysis into poverty reduction strategies, the work of linking peacekeeping and having a human rights component in it, in our colleagues working in Sierra Leone, in East Timor, the work we were doing on transitional justice, as we called it — human rights commissions.

I sat in Peru during the summer at a meeting of the Human Rights Commission there. I was thanked as High Commissioner for the support we’d given, and then subsequently last August in East Timor I sat with a village community reconciling and again heard them say, “We couldn’t have done this “without the support of the Office of the High Commissioner.” So this is the sort of feedback you need to get, but it also showed me that committed targeted human rights work makes a huge difference.

KERRY O’BRIEN: And yet you mention East Timor — you must also have felt disappointed about East Timor because I can remember interviewing you when you were in Jakarta trying to lobby the then government to cooperate with a war crimes tribunal similar to that in Bosnia and Kosovo. Now that failed, didn’t it? It was left to the Indonesians in the end, and what’s happened?

It’s very interesting to see after two years, as I did last August, the impact on the population of East Timor because I could see a lot of building of houses with the roofing that had been provided by the High Commissioner for Refugees.

I could see more economic activity, people getting their lives back together, and yet I found in the whole population a seething anger about the ad hoc human rights court in Jakarta — the fact that the worst perpetrators looked as if they were going to get away with it.

And they kept saying to me, “We want an international tribunal.” And I was saying to them, “Well, now you have your own government “and you must ask your government to decide what East Timor wants,” and the government is reflecting on how to address the fact that they’re not getting justice in Jakarta.

KERRY O’BRIEN: You weren’t just engaged in conflict as commissioner with third-world countries, were you — very much also with first-world countries? You found yourself in conflict with the Australian Government over the detention centres for asylum seekers here. Do you deny the Government’s right here to detain people delivered into this country by people smugglers rather than through the UN’s own refugee programs?

What I was concerned about was the complaints that the manner of addressing with the preventive detention and the way in which it worked raised human rights issues.

And it was important precisely because Australia is a developed country and a democratic country that the international human rights standards apply and that they have to be sometimes addressed in a particular way.

So I was very glad to send Justice Bhagwati, the former chief justice of India, and I was very pleased with the report that Justice Bhagwati furnished. We had sent an advance to the Australian Government — they had it for a week before anybody else to correct any factual errors. They made some factual comments, and we incorporated them all. So it is factually correct and I believe that it is a very good human rights perspective on the issues that had to be addressed, and, as I say, stand over it 100 per cent.

KERRY O’BRIEN: Although the Australian Government was extremely critical of it publicly in the end, and they said that they felt Justice Bhagwati had come here with a preconceived view, that he listened really only to one side of the equation — that is, the partisan view of those who are lobbying against detention centres. And Justice Bhagwati himself acknowledged that he had very little time in fact to investigate properly.

No, I don’t think so. I have the highest regard for Justice Bhagwati. As I said, he’s a former chief justice, he has an extremely high reputation in human rights and he’s precisely somebody who wouldn’t be swayed in an inappropriate way. He knew that he would have little time, that’s true. But he spoke to a very wide range of different groups, including at the government level. And the point now, I think, is that his report, together with the report of the working group on arbitrary detention, will be considered at the commission on human rights and by my successor, Sergio Vieira de Mello.

At a more philosophical level, it reinforced the integrity of international human rights and the agenda that, as High Commissioner, I would address issues in a country like Australia. I also spoke out about issues in the US and in other countries — France and elsewhere — as I addressed problems in developing countries.

KERRY O’BRIEN: You’ve been critical of the expression “war on terror”. Why?

I found it necessary immediately after the terrible attacks in the US on 11 September — and they were invoked again with the terrible attacks in Bali recently — I found it necessary to sit with my colleagues and carry out a human rights analysis and we concluded — and I said this very publicly shortly after the attacks — that they amounted to crimes against humanity, which requires legally that every country join in bringing the perpetrators to justice and using every appropriate means.

So I welcome the Security Council’s resolution 1373, requiring all countries in a mandatory obligation to take steps to follow the money, to do better police work, to tighten their laws, et cetera.

All of that, in my view, is a way to address the precise nature that there are terrible perpetrators — some of them al-Qa’ida, some of them groups in Indonesia that Australia is so rightly concerned about, and so on — and that we should focus in a surgical way on going after those perpetrators.

If you talk the language of “war on terrorism”, it’s a very blunt language, and there is a certain sense that, when you’re at war, you cut corners. And what I was worried about — and I saw it happening to some extent — was the corners being cut were precisely the standards of human rights.

KERRY O’BRIEN: And yet the US was responding to the most fundamental human rights abuse of all. The denial of life.

Indeed. Of course I’m completely unequivocal — terrorist acts like that are totally against human rights, and I made that clear from the beginning.

KERRY O’BRIEN: Why do you tilt at windmills?

I regard it in fact as incredibly encouraging to see that civil society groups worldwide are becoming more informed about the legal commitments our governments have made. This is very important for democracy. Young people have become very cynical about voting for a government and then seeing that it doesn’t reach its commitments. Here are new tools, a new way of enforcing.

It’s also very empowering of women’s groups, youth groups, black African descendant groups in the Americas, the Roma in Europe — they can use these tools. The most marginalised — the Aborigines here in Australia, rural communities that feel they’ve been left out can use these tools very effectively.

I think that governments are aware that this matters, and some are resisting for that reason. This actually penetrates into the power game and can make a more ethical globalisation.

KERRY O’BRIEN: Mary Robinson, thanks for talking with us.