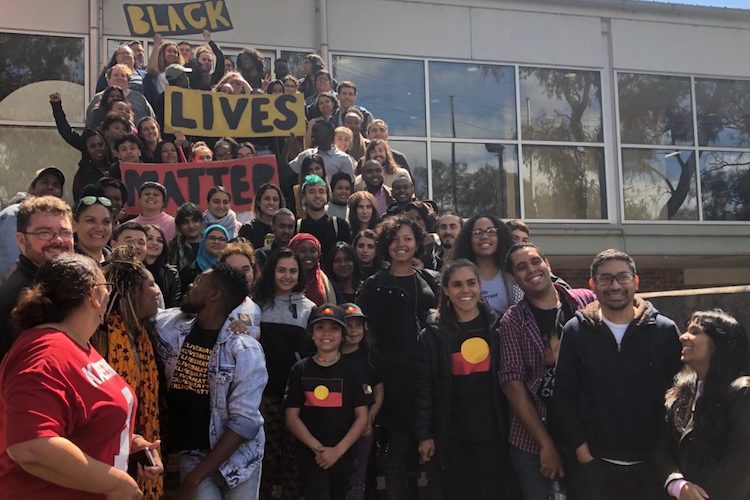 The visit of the founders of Black Lives Matter to accept the Sydney peace prize should be leveraged by First Nations, indeed by all people of colour in Australia plus our allies and advocates, as a mechanism to have our agendas infiltrate mainstream forums at an international level and work towards redressing the raft of issues that affect us.

Rather than a crescendo doused in limelight, the presence of Black Lives Matter in Australia should be viewed as a starting point. It has provided a perfect opportunity for community program practitioners, activists and advocacy groups to come together, form stronger alliances and both expose and progress broader public understanding of the complex of race-related (and gender-related) disadvantage and discrimination in this country. These firmer connective networks can and will contribute to delivering a more participatory form of democracy than Australia is used to.

Last Friday I met Patrisse Cullors and Rodney Diverlus from Black Lives Matter at Melbourne’s Tullamarine airport and flew to Mildura to hear from local mob there about community efforts to improve issues such as family violence and overrepresentation in the justice system. The objective of the trip was for IndigenousX to provide Black Lives Matter with an understanding of what is happening on the ground in Indigenous communities, outside the inner-city metropolitan areas that their itinerary had otherwise confined them to.

In Mildura we gave them a glimpse of the potential of community-led programs so they could take that knowledge with them into a week packed with media appearances and meetings. Cullors and Diverlus also heard from community about their lived experiences, past and present, to provide them with a better understanding of the persistent issues impacting Indigenous communities more broadly.

Together we heard from elders and respected community leaders about the role they play within Victoria’s Koori court and how that program aims to reduce recidivism and overrepresentation within the state’s justice system.

We visited the Meminar Ngangg Gimba women’s shelter and listened to the elders who work there around the clock to assist families escaping domestic violence. We sat with representatives of the Victorian Aboriginal Legal Service and heard what it’s like growing up in Mildura and the state of relationships between the region’s Indigenous youth and police. These conversations, as well as others with different community members, revealed a common thread: self-determined programs that provide Indigenous decision-making roles work better than those not being led by mob.

The cruel irony of Malcolm Turnbull’s flat rejection of the Uluru statement’sproposition for a constitutionally enshrined Indigenous voice to parliament hung absurdly and deplorably over each of these exchanges.

Driving back into town after listening to that Murriwarra elder Aunty Margrett Handy-Mitchell recount her experiences growing up in the region, Guardian Australia’s videographer David Fanner asked Cullors and Diverlus if they understood what was meant when Aunty Margrett told them that as a child she used to find her shoes at the “tip”.

“That’s only one generation back,” Fanner said in amazement. We were following Uncle Peter Peterson towards Dareton’s Namatjira mission. “Nama”, as locals refer to it, is an Aboriginal settlement established in 1968 to wipe out the multiple shanty towns that surrounded Mildura. Nama had electricity and water connected in 1992.

During our time in Mildura, and briefly in the video we produced, Cullors and Diverlus explained their perspectives of the black diaspora to me. It was a tale of urgent inequality and disadvantage, of black fear and the violent erasure of diverse culture and diverse bodies. First Nations peoples in this country haven’t escaped that conceptualisation of diaspora either. In fact it’s an ongoing project. The dispersals perpetrated on our old ones during the frontier wars, and again notably in the first half of last century under the banner of the assimilationist white Australia policy, have simply been working more quietly, more insidiously recently. Here too, the state-willed erasure persists unabated.

The bestowing of the Sydney peace prize on the Black Lives Matter movementshouldn’t be interpreted as ignoring any of our domestic race-related human rights issues. It has provided a space to amplify these issues into dominant forums, but more importantly, it has presented the opportunity to draw together and form stronger strategic alliances across our diverse advocacy groups, to form a collective to push back against the commonwealth’s ongoing colonial project, to form a network of resistance operating on many fronts simultaneously.