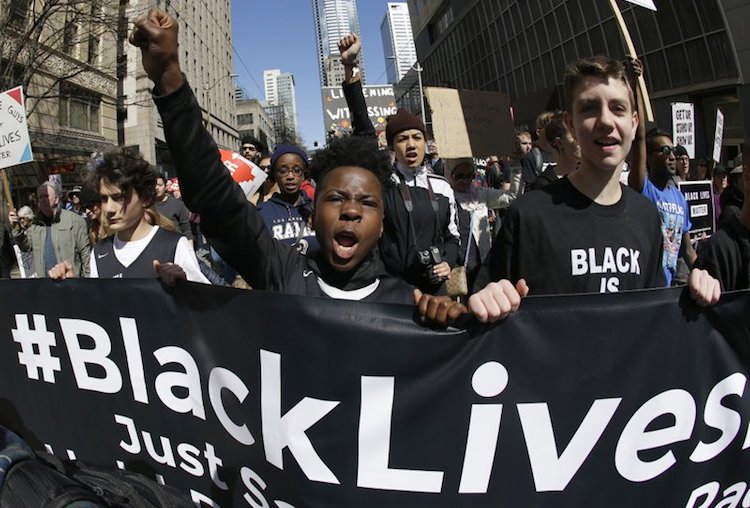 SYDNEY (AP) — A Black Lives Matter co-founder called on Australians to make a courageous stand and heal the nation’s racial problems and said Wednesday the U.S.-based movement was committed to the global struggle of the black race and solidarity with Australia’s indigenous people.

In Australia to accept the Sydney Peace Prize on behalf of her movement — the first time the 20-year-old award is being bestowed upon an organization — Patrisse Cullors said Australia’s racial problems mirrored those of the United States, where Black Lives Matter began four years ago after the killing of Florida teenager Trayvon Martin.

In an address to journalists at the National Press Club in Canberra, Cullors said Black Lives Matter had grown from a hashtag in the United States to a group with more than 40 chapters worldwide.

“We stand here today as a Black Lives Matter global network committing to be a part of a long legacy of a global black struggle and solidarity with the indigenous peoples of Australia, South Sea islanders and Torres Strait Islanders,” Cullors said.

She urged the Australian government to heed the demands of its indigenous communities because too often people found the government to be a silent bystander or perpetuator of the atrocities black people faced.

Jackie Huggins, co-chair of the National Congress of Australia’s First Peoples, said Black Lives Matter resonated with many Aborigine and Torres Strait Islander people, who comprise less than 3 percent of Australia’s population but more than 25 percent of its prison population — 33 percent in the case of women.

“Many people know about the mass incarceration of people of color in the United States, but most aren’t aware aboriginal and Torres Strait Islander people are the most incarcerated in the world,” Huggins said.

Cullors said while in Australia she had learned about its racist past and heard from indigenous people about their own experiences of violence and harassment at the hands of authorities.

“For those of us who experience this type of devastation every single every day, we don’t have a choice,” Cullors said. “When everyone else fails to carry the weight with us, the complicitness, and the benefiting from anti-black racism, the refusal to name anti-black racism, the erasure of our devastation, we are expected to carry that failure, to carry their inability to recognize that freedom for us means freedom for everyone,” she said.

“If you don’t see yourself as an active participant in the liberation of black people, now is the opportunity. All our lives depend on it.”

Australia remains the only former British colony to have never signed a treaty with its indigenous people, which critics say has led to a damaging history of policies being forced on them from the government rather than allowing them greater self-determination.

Cullors’ fellow co-founder, Toronto-based Rodney Diverlus, told the gathering that Black Lives Matter was “a political home for black folks around the world.”

“Wherever you go and see black folks, anti-blackness exists,” Diverlus said. “The systems are failing us. Our governments are not intervening.”

Diverlus related Australia’s racial picture to that of Canada, saying much of Black Lives Matter’s work in his home country was done “to dispel the myth of Canadian benevolence.”

While Canada was “internationally known as the champion of human rights”, Diverlus said, Canada’s black and indigenous people were disadvantaged across the board — “whether it’s in incarceration, racial profiling, employment, education, (or) access to services.”

Still, Diverlus said now was “a particularly exciting time because black folks across the globe are now sharing.”

“We’re sharing resources, we’re sharing tools, we’re sharing organizing tactics, we’re coming together to recognize that as our governments and as our countries suppress us, we have a global obligation to support our own people,” he said.

“We are building an inter-generational movement never seen before … one that is intersectional and fights for all black lives.

Black Lives Matter is being awarded the Sydney Peace Prize “for building a powerful movement for racial equality, courageously reigniting a global conversation around state violence and racism,” the Sydney Peace Foundation — part of the University of Sydney — said in a statement.