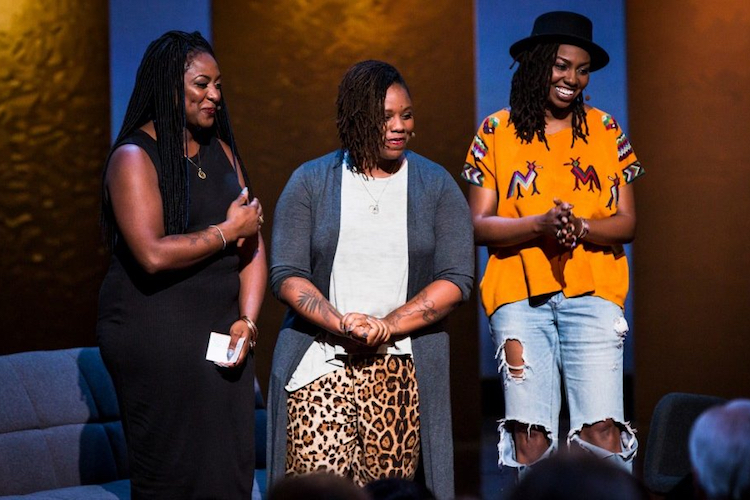 Awarding the founding members the Sydney Peace Prize affirms the goals and the work accomplished by BLM so far have been crucial to any modern peace-building initiative.

The founders of The Black Lives Matter Movement — Patrisse Cullors, Alicia Garza, and Opal Tometi — will be receiving the Sydney Peace Prize. Sydney, as in Sydney, Australia, a country whose reputation includes the colonization of its Aboriginal population.

Similar to the Nobel Peace Prize, the University of Sydney awards individuals who have made marked contributions towards world peace through human rights activism and combating injustice. I couldn’t think of anyone more deserving of this award and humbled by it, than these three amazing black femmes.

The trio has remained pretty low key since they founded BLM in response to the miscarriage of justice that was the Trayvon Martin trial. A wise move considering the speed which the rallying cry “Black Lives Matter” instantly resonated worldwide. They encouraged the statement “black lives matter” to stand on its own volition, and they’re certainly aware that not everyone will appreciate, respect, or accurately report on the work they’re doing.

Although BLM’s decentralized leadership approach has allowed its founding members a level of protection from the senseless scrutiny — from the conservative media and our government (which has a history of gunning down our leaders in their sleep) — the lack of a central figurehead vocalizing BLM’s goals has led to the commercialization of the movement as well as misinterpretations of the motives of the organization. Some folks have run off with the name — printing it on shirts, writing it on walls. More dangerous, some critics, out of sheer spite, have actively sought to muddy BLM’s agenda by labeling it a hate group and calling for BLM’s disbandment.

By virtue of all this, the general public is misinformed. Even French Montana shouted black lives matter for a reason unbeknownst to all of us. And, make not mistake, the reasons why black lives matter activists use that specific phrase are important.

So with this celebration near, I would like to take this opportunity to remind you all of the ways BLM is actually a peaceful organization.

Consider, firstly, the inclusiveness of the movement. If you visit BLM’s official site and click on the guiding principles link, you will find a clear list of all the things BLM is, all the variations of blackness and marginalized identities BLM embraces. From unapologetically affirming inter-generational, queer, non-binary and transgender identity to centering the unique struggles of disabled black communities, and so many others.

Unlike its predecessors, such as the Civil Rights Movement, BLM does not have an exclusionary nail in its foundation. The founding members understand that for black lives to matter, all categories of black identity must be recognized. They understand that as a Black person shouting “Black lives matter,” you are subscribing to the fact that all lives will not matter until ALL Black lives matter. Not just the lives that are related to you; not just the lives of Black people like you, or who hold your values. But, all Black lives. The Black lives you appreciate and the Black lives you can’t quite get are deserving of equal respect, without issue.

Consider, secondly, the kinds of events BLM sponsors.  Take a look at this list of ongoing events and initiatives which are actually sanctioned by BLM.

What about supporting black mothers, hosting nationwide teach-ins, or deepening higher-ed curriculum with BLM-themed readings translates to hate and violence? Nothing. Peace, true peace, demands this kind of work. It’s essential and timely.

Lastly, consider BLM’s trained instinct for self-criticism. Using an intersectional lens to frame the contemporary struggles of Blacks, BLM was the first movement to call out even the most well-meaning Black activists for their phobias, just as Kimberle Crenshaw, the founder of intersectional feminist theory, called out her white women counterparts.

People affiliated with and sympathetic toward the black lives matter struggle know that they are called upon to embody the goals set forth by Cullors, Garza and Tometi. They are required to do more than exclaim “Black lives matter” or add a #BLM to their Twitter bio. They are required to option transformative love and reconciliation over hate, as avenues that lead to real peace.

Real peace is only possible when we draw attention to the invisible worlds that made BLM’s now famous rallying cry necessary. We come closer to its quarters when we take seriously what the name of this struggle has been trying to get across to people of privilege for years: “We matter! Please don’t kill us, someone will mourn us!”

Those who truly understand what the BLM movement is about will continue to work on behalf of the goals discussed above. Furthermore, awarding the founding members the Sydney Peace Prize affirms the goals and the work accomplished by BLM so far have been crucial to any modern peace-building initiative.

To reiterate a point I made earlier, given Australia’s history of colonization and violence towards Aboriginal people, it is refreshing to witness their support of BLM.

But, why stop here? Our question now is, hey Nobel…where you at?

This article, written by Joy Mohammed, first appeared on Wear Your Voice on 26 May 2017.