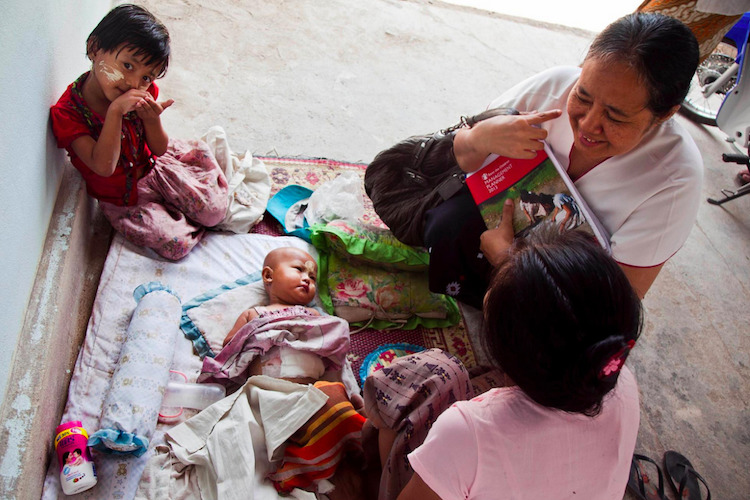 With AusAID withdrawing its funding from a clinic serving Burmese refugees, where will they go now to get the treatment they need? PhD scholar at the Menzies Centre for Health Policy at ANU College of Asia & the Pacific Belinda Thompson reports.

They are the refugees Australia has forgotten. Displaced by years of bloody conflict, more than 100,000 Burmese are still living in Thai-Burmese border camps, as they have for decades, relying on help from outside. But that help is now drying up, with an AusAID decision to withdraw funding from a medical clinic that serves refugees.

Around 75% of the Burmese population worked in agriculture. When they fled the conflict, their land was confiscated, which meant losing their household registration inside Burma, a status that determines citizenship and access to basic services such as health and education. Even those who were displaced but remained within Burma lost their registration, and many now rely on services provided by NGOs across the border in Thailand.

One of the core respondents to this crisis has been the Mao Tao Clinic in Mae Sot, Thailand. Founded by Dr Cynthia Maung in 1989, the clinic provides free healthcare to those in the refugee camps and the many thousands more internally displaced people who make the perilous journey across the porous border into Thailand each year. The clinic directly assists more than 100,000 people annually.

For the past three years, around a quarter of the clinic’s budget came from AusAID. But in July this year AusAID informed the clinic that its $500,000 annual funding would not continue past the current agreement, which ends in December. AusAID was the clinic’s second-largest donor.

“These are essential services for the vulnerable population. There are still people coming across the border into Thailand to access our services. The current health system is not accessible to the Burmese population who are mostly living in the rural areas. Infant and maternal mortality is one of the worst in the region. Even people who are working as migrant labourers [in Thailand] — less than 10% of that population have legal documents, which means they can’t access the Thai health system.”

Kate Lee, executive officer of Mae Tao’s Australian Partner, Union Aid Abroad (APHEDA), says AusAID’s decision not to renew the funding will have a major impact on the clinic. Of the 100,000 people the clinic treats each year, around 45,000 directly benefit from AusAID’s funding.

“The funding directly assisted the treatment of beneficiaries with essential healthcare, including maternal health, eye care, prosthetics for land mine victims, child health, vaccinations, HIV services and counselling and the training of medics,” Lee said.

An AusAID spokesman said the organisation had been unsuccessful in securing funding “for a new program of support” for refugees living on the Thailand-Burma border.

“APHEDA’s proposal, which was to fund the Mae Tao Clinic, was unsuccessful because it did not meet the selection criteria. AusAID will continue to fund the placement of Australian volunteers at the Mae Tao clinic,” the spokesman said.

Crikey understands that the selection criteria was geared towards organisations looking to assist in moving refugees back into Burma, even though this has been described by many organisations, including the United Nations Human Rights Commission, as “premature”.

A UNHCR representative recently told The Irrawaddy: “There is no permanent ceasefire in many potential areas of return, and there are still problems like landmines, land disputes, and a general lack of services and infrastructure. We feel that at the moment, not all the conditions are in place for organised returns to take place in a safe and sustainable way.”

AusAID has redirected funding within Burma’s borders; however, the scale of the changes needed in Burma will take time to be implemented. In the meantime, those without household registration both inside and outside the border remain reliant on the Mae Tao Clinic.

With Maung due in Sydney to accept the 2013 Sydney Peace Prize in November, many are hoping AusAID will reverse its decision to take funding away from one of the world’s most vulnerable populations.