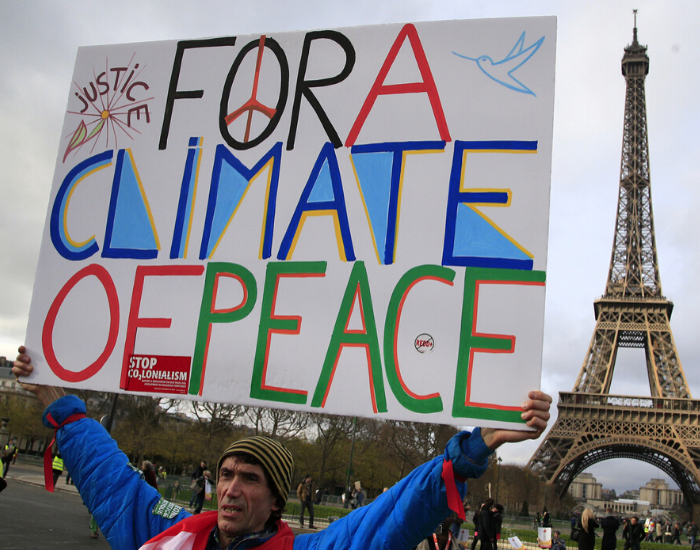 Climate action is the most pressing peace work of our time

What a difference four years make.

December 12, 2019: Scott Morrison was having a so-so day. He had faced international criticism of the Government’s response to climate change. Bushfires were raging up and down the coast of NSW, and Sydney had been smothered in smoke for days on end.

He got up that day and felt the need to assure voters he really did understand that there was a link between the bushfires and climate change. This was, of course, after some earlier dog-whistling comments that suggested that there was no such link. Nothing to see here. Also, now is not the time. Thanks PM. Nothing a good trip to Hawaii couldn’t fix.

December 12, 2015: 195 nations came to a consensus about how best to tackle climate change and cinched the Paris Climate Agreement. Scott was the Treasurer, serving Malcolm Turnbull as Australia’s still quite new PM. Malcolm announced Australia’s willingness to join the Paris Agreement with aplomb, highlighting the great challenge facing humanity, a challenge that would be met head-on by human ingenuity and invention.

At a global level, the Paris deal was welcomed. There was ambition laid out in these new global plans. There was also a fair amount of hard-negotiated pragmatism. We had a commitment to limit global warming to under 2-degrees Celsius, coming at least close to the 1.5-degree limit that is expected to avoid catastrophic environmental changes. We had days and nights – over years, not weeks – of departmental advisers and UN officials crafting a document that courageously worked out the specifics of this commitment. The result: a final, smiling, hand-shaking photo of leaders in agreement. And a global plan to address climate change.

All around the globe, the climate crisis is happening right now. And it is an affront to human rights, peace and justice.

The connection between climate crisis and human rights violations is clear. Environmental degradation and water stress lead to hunger, famine, loss of livelihoods, displacement, and irregular migration. These connections are already impacting lives in the Pacific, Middle East, Libya, Afghanistan and Pakistan. The IDMC says that since 2008, an average of 26.4 million people per year have been displaced from their homes by disasters brought on by natural hazards. This is the equivalent to one person being displaced every second.

Unless emissions are reduced significantly, around 600 million people are likely to experience drought and famine as a result of climate change…the right to life, health, food, water and housing are already under threat.

Climate change is also transforming the security landscape. In 2019, for the first time, the Global Peace Index identified climate change as a considerable threat to global peace in the next decade. This is because the impacts of climate change wear away the capacity of states to prevent conflict. Erratic weather patterns and extreme weather events cause resource scarcity and render land inhabitable, intensifying inequality and conflict.

Where there is lower capacity for states to respond, adapt to and recover from climate-induced disasters, marginalization and local grievances intensify. Climate change disproportionately impacts economic development in conflict-affected countries that depend on agriculture for their prosperity.

How will states the world over deal with this challenge in a just manner, at a time when the world continues to get hotter? Australia’s most recent experience with bushfires suggests that we – even as one of the wealthiest countries on the planet – are decidedly not ready. As past Sydney Peace Prize Winner Naomi Klein has said:

So: there can be no choice. We must act now to curb climate change. We – and most importantly our political leaders – must act with the speed and drive of knowing that climate action is the most pressing peace work of our time.

The Sydney Peace Foundation will focus exclusively on this core challenge to global peace and justice in 2020.

Christiana Figueres is one woman who has risen to the task. It was her leadership of the UN climate body the UNFCCC way back in 2015 that saw a global climate deal become a reality. Her profound commitment to the principle of peace enabled her to effectively negotiate a deal with multiple nations harbouring a multiplicity of interests.

Today, she and her organisation Global Optimism remind us that we need to maintain both the outrage that leaders are failing to act, and the optimism to believe that change really is possible. Because

Outrage without optimism leads to defeatism, and optimism without outrage leads to unacceptably incremental approaches. Instead, they should be forged into effective action.

Action like the current call for a national Climate Act in Australia, that is gaining traction and would mandate a positive and transparent response to this challenge.

Today we will award the Gold Medal for Human Rights to Christiana Figueres, for forging the Paris Agreement and her ongoing global leadership, and for maintaining the pressure and the belief that change can happen. Christiana Figueres shows us that when it comes to the climate crisis, peace is possible.