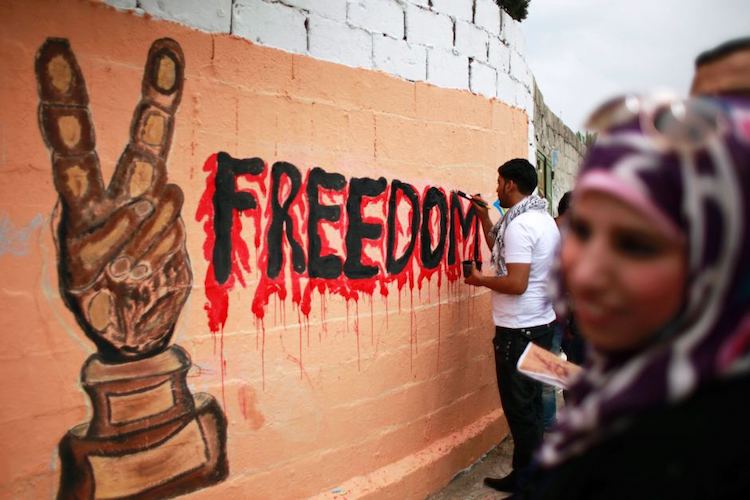 Cruelty as Policy: the Israeli Army’s Culture of Revenge

Much attention has been given to Prisoner X, but far less has been granted to the many Palestinian prisoners who are still suffering in Israeli detention, writes Professor Stuart Rees.

Publicity surrounding the mystery of Australian Ben Zygier – Prisoner X – and the death on Sunday of the allegedly tortured prisoner Arafat Jaradat has provoked Palestinians to protest the treatment of thousands of other prisoners in Israeli jails, including men on a hunger strike who are near to death.

Although the treatment of prisoners by Israel denies them their civil rights and breaches international humanitarian law, the essence of Israel’s behaviour is best described as the use of cruelty as policy.

Cruelty means ‘disposed to inflict suffering’, or ‘taking pleasure in inflicting pain’. A culture of revenge drives the operation of Israeli military law, I believe. Palestinians detained under administrative detention are not charged, do not know what they are supposed to argue against, or when they will be released.

A recent editorial in Haaretz said, “Even if the arrests (of those in administrative detention) are legal according to military decree, they are draconian and reek of cruelty and abuse.”

About 180 Palestinian children are in custody, most for the offence of throwing stones at military vehicles, with less than half of them sentenced, and most of them detained until the end of legal proceedings.

Last year’s investigation by Harriet Sherwood of The Guardian showed that arrested Palestinian children were locked in solitary confinement for days or even weeks, released only when they appeared in an interrogation room, where they were shackled by hands and feet to a chair while being questioned.

The non-government organisation Defence For Children International – Palestine Section (DCI-Palestine) identified practices of blindfolding, physical abuse and threats, and confirmed that imprisoned Palestinian children were rarely questioned in front of a parent and rarely saw a lawyer.

Although The Guardian had seen audio visual recordings of such interrogations, the Israeli military maintained that it “acted in accordance with the law and the unequivocal guidelines which forbid such practices”.

Only outside influence – such as that effected by the worldwide Boycott, Divestment and Sanctions (BDS) campaign – will chip away at the Israeli government’s indifference to the rules of international law, let alone to UN resolutions.

At first sight, the international community’s response to the abuse of Palestinian prisoners and to the near death plight of the hunger strikers seems encouraging. European Union policy chief Catherine Ashton and Quartet on the Middle East envoy Tony Blair have called on Israel to respect the human rights of Palestinian prisoners.

But given Israel’s indifference to outsiders’ appeals, Aston’s and Blair’s words will hurt like a slap with a feather.

Israel’s military acts with impunity. Israel’s leaders remain unaccountable and in the name of security, take any action they wish.

Besides, Israel’s critics will be told, ‘Iran is the threat’, ‘Look at Syria’, ‘Australia, put your own house in order’, ‘We are defending our very existence’, ‘You are talking about Palestinians, so who cares?’

Is it possible that other evidence of cruelty could prompt even hardline Zionists to reflect and find sufficient humility to think about the notion of a common humanity?

In 2009, Israeli soldiers commissioned t-shirts depicting a pregnant Palestinian with a target over her belly and the caption, One shot, two kills.

Those examples may be ignored because they occurred years ago. Yet today, even the seriously ill are prevented from obtaining the necessary medical attention.

Gaza resident Sabreen Okal, a 27-year-old mother of five has a malignant tumour on her arm and needs radiation treatment in a Jerusalem hospital. Israeli authorities refused her entry on December 20 and again on January 21. They say they are still looking into her file.

Prima facie, the examples of the treatment of prisoners, children, women in labour and the seriously ill confirm the notion of cruelty as policy.

My contentions may be discussed by individuals who have had a privileged upbringing, an encouraging education, perhaps fulfilling employment and who return each evening to comfortable homes. It is also likely that they have never been to Gaza, seldom to the West Bank, and have never seen life in the refugee camps of Lebanon, have never witnessed Israeli justice or visited Israeli prisons.

Such citizens could at least ponder whether a proportion of the attention given to Prisoner X should be diverted to insist on the human rights of all Palestinian prisoners. Instead of modest pleas of the Ashton/Blair variety, a few politicians could say they are outraged by cruelty and will immediately insist that unless prisoners in administrative detention are convicted of terrorist offences, they should be released immediately.

In the run-up to an election in Australia, there’s a huge opportunity for policy change. Who wants to outlaw cruelty? Who really cares about the human rights of Palestinians?