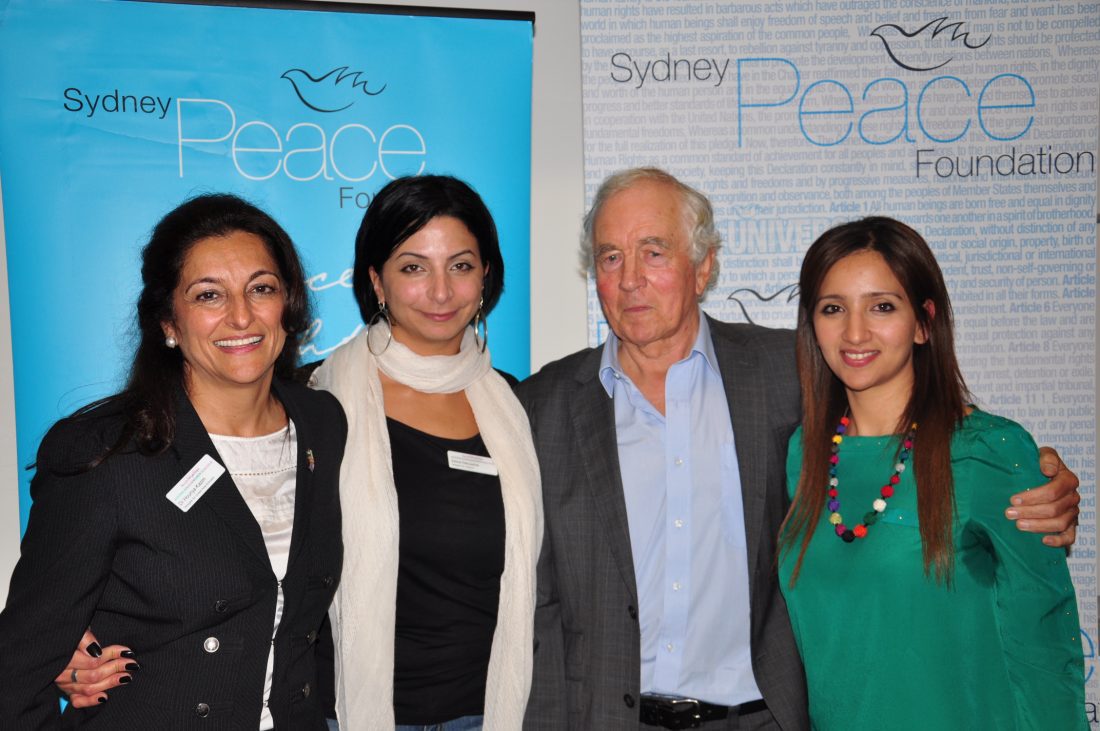 On Thursday 21 March 2013, in partnership with the Australian Arab Women’s Dialogue and the Centre for Peace and Conflict Studies, the Sydney Peace Foundation staged a panel discussion to discuss the role of women in building and sustaining democratic practice in their countries.

The panel was facilitated by Professor Stuart Rees, with:

The three representatives are part of a nine member delegation which includes key women leaders from Egypt, Jordan, the Palestinian Territories, Iraq, Libya, and Saudi Arabia.  This is the first dialogue of this kind in Australia.

ABC’s Big Ideas TV filmed the program and aired it at 11am on ABC1 and on Sunday 12th at 1pm on ABCNEWS24:

Ms Zeina Daccache (Lebanon), Clinical Psychologist, Drama Therapist, Actress and Filmmaker
Ms Zeina Daccache is a clinical psychologist, drama therapist, and established comedian, as well as an award winning actor and filmmaker in Lebanon. Ms Daccache is the founder of CATHARSIS (Lebanese Centre for Drama Therapy) CATHARSIS is the first organization of its kind in the Middle East. Inspired by her volunteer work with distinguished drama therapist Armando Punzo, Ms Daccache developed a Drama Therapy Program in prisons, which supports the rehabilitation and empowerment of incarcerated communities in Lebanon. Ms Daccache is the recipient of many awards given for her distinguished contributions to the field of social initiatives and services. For her outstanding work in the documentary 12 Angry Lebanese was awarded the Muhr Arab Documentary First Prize Award, the People’s Choice Award at the 2009 Dubai International Film Festival, and a United Nations commendation in 2010. The documentary has also been screened at the Arab Film Festival in Australia, and was purchased by SBS.

Ms Manal Elattir ( Morocco), CEO of Social Enterprise for Women’s Economic Empowerment. Founder of the first NGO in Social Entrepreneurship in Morocco.
Ms Manal Elattir is the founder and managing director of Anarouz Social Enterprise a for-profit social enterprise empowering women and alleviating poverty through entrepreneurship and market access. Before launching the enterprise, Ms Elattir was the director of the Middle East Partnership Initiative (MEPI) Alumni Network, a network of activists, politicians, entrepreneurs and civil society actors that collaborated to design and lead development initiatives in Morocco. She is also the founder of IMDAD, the first NGO to tackle social entrepreneurship for youth in the country. Ms Elattir was selected as the UN Alliance of Civilization International Fellow and as a UNESCO Human Rights Chair Fellow. She has also been nominated for the Fortune/US Department of State Global Women Mentoring program and for the Women Leaders for the World program at the Global Women Leadership Network. In addition to these honours, Ms Elattir has earned the Architects of the Future Award for her social enterprise initiative.

Dr Houriya al-Kazim (United Arab Emirates), Medical Director and Consultant Breast Surgeon, Well Woman Clinic. Founder of Brest Friends
Dr Houriya Kazim is a United Arab Emirates’ national who is the country’s first female surgeon.  Dr Kazim attended medical school at the Royal College of Surgeons in Ireland graduating in 1988. While working as a junior doctor at a government hospital in Dubai that she saw the urgent need for a female surgeon. She subsequently returned to the United Kingdom and went on to obtain her fellowship in General Surgery before sub-specializing in Surgical Oncology and, in particular, Breast Surgery and reconstruction at the Royal Marsden Hospital in London.  She worked as a volunteer surgeon in the Caribbean before coming home to Dubai in 1998 to take up a post as a Breast Surgeon at a private hospital. In 2006, she set up the Well Woman Clinic a multidisciplinary clinic which is staffed by women, for all women’s health needs.