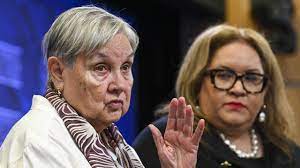 The architects of the Uluru Statement from the Heart say bipartisan support may not be as important in passing a referendum as it was in the past, and have warned that if the government doesn’t hold a vote to enshrine the voice to parliament soon, momentum will be lost. It comes as the Coalition continues to withhold its support for the voice because of a lack of clarity over how it would function, with Anthony Albanese resisting pressure to lay out too much detail at the risk of losing Australians “in the weeds”.

The Prime Minister has also not set a time frame on when a referendum would be held, but has allocated July 2023 to the middle of 2024 as a window. UNSW Pro Vice-Chancellor and Uluru Statement co-chair Megan Davis said while she understood the attention paid to whether bipartisan support could be achieved for a referendum to enshrine the voice, it may not be as important as it used to be.

Of the 44 referendum questions since 1901 to change elements of the Constitution, only eight have been successful and they had bipartisan support. “On the bipartisanship question, there is that
calculation that people make that eight out of 44 had bipartisan support … but the last referendum was 40 years ago,” she told the National Press Club on Wednesday. “Who knows what a radical impact social media is going to have on discourse? “Our job (as Indigenous leaders) is to keep talking to the Australian people about what (the voice) is … and what we’re seeking to do, and leave the politics for the politicians.” But Professor Davis said it was “difficult” to make an absolute judgment on whether the referendum could pass without bipartisan support.

Peter Dutton has continued to raise concerns over the voice and the government’s efforts to “rush it through”. “People have legitimately got reasons to support, they’ve legitimately got issues of
concern and reasons to oppose,” the Opposition Leader said in Townsville last month. Professor Davis said it “would be a good thing” to get Mr Dutton on board, but that “we’re not there yet”. “They’ll come around to it in their time,” she said. “In the work we’ve done … there’s strong support from members of the Liberal National Party.” Despite the criticism from the Coalition that the process had been “rushed”, Sydney Peace Prize recipient Pat Anderson urged the Prime Minister not to delay because “this is the best opportunity we have ever had”.

“There is a fine line between getting everybody ready for a referendum and when it is time to go, and there is definitely a time to go, no doubt about that,” she said. “We can’t leave this hanging around for too long otherwise we will lose momentum. If we go into the next term … we are lost, in my view. We will have lost the momentum and the government and all of us will get sidetracked by a lot of other things.”

Indigenous entrepreneur Warren Mundine said on Wednesday he did not accept that Aboriginal people were voiceless. He said the claims of Uluru architects – including that the call for a voice was from the disempowered – made him want to campaign harder against the reform. He said that, on the contrary, Indigenous people in remote communities
who he had spoken to did not understand what the voice was or how it would work. “I am even more determined to campaign No,” he said.

In her Press Club address, Professor Davis also stressed the importance of the sequencing of the Uluru Statement – which calls first for a voice before a treaty and truth telling process – in a veiled swipe at the Greens changing their preferred order to truth, treaty, voice. “I know this has been the subject of some debate. The sequencing was the subject of very diligent consideration in all the dialogues that led to Uluru,” Professor Davis said.

THIS ARTICLE WAS WRITTEN BY SARAH ISON PAIGE TAYLOR AND FIRST APPEARED IN THE AUSTRALIAN ON 10 NOVEMBER 2022.