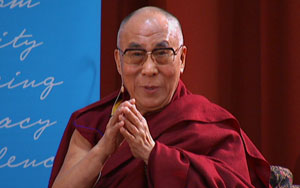 This morning His Holiness the Dalai Lama was invited by the Sydney Peace Foundation to participate in discussions of Ethics for a Whole World at the New South Wales Parliament House attended by more than 170 students and others. A preamble to the event paid tribute to the Cadigal people and their possession of the local land, which corresponds to Tibetans’ possession of the land of Tibet.

Initiating the interchange with His Holiness was ABC journalist Andrew West, who opened by asking about what has been happening in Tibet, His Holiness replied:

West said he was thinking about the 119 self-immolations that have taken place since 2009. His Holiness responded that it is very sad and that Tibetans have suffered a lot. Now the whole of Tibet is full of fear, reminding him of a group of young Chinese he met in the 1990s who described China as a place where no one could say what they really thought or felt in an atmosphere full of fear and suspicion.

Asked about religion’s role in conflict, His Holiness denied that we can blame religion in terms of doctrine as much as religious institutions. He said religion involves teachings about love, compassion, tolerance and self-discipline; who could object to that? Religious institutions, on the other hand, the world over have not always been free of bias and corruption. About the clashes between Buddhists and Muslims in Burma he said he thought the root of the problem was more economic and political than religious and had been heartened by news of a Buddhist monastery there offering Muslims shelter.

West prompted His Holiness to talk about his latest book, ‘Beyond Religion: Ethics for a Whole World’:

“Look at basic human nature. Our mothers give birth to us and we survive because of the affection she shows us. If she abandons us we die. Because of the affection we receive as infants, we have the potential to show affection to others. However, as we grow up we tend to feel we can look after ourselves and have no need for others’ support and affection. And yet we are social animals, whose very existence and opportunity to live a happy life depends on the rest of our community. In our modern education system we need to find a way to nurture our basic human values.”

Pressed again about religious violence, His Holiness repeated that such conflicts were more often rooted in economic problems, although sometimes narrow-mindedness and outmoded insularity are also to blame. He was asked his view on whether schools should be allowed to teach that one religion is true and others are false. He teasingly replied that if you have a fervent belief in a creator, you have to believe that he created Buddhism and the Buddha along with everything else. On the other hand it would be completely unrealistic for His Holiness to think he could convert all 7 billion human beings to Buddhism, apart from which he always advises people to stick with the religion they were born with.

“The world has become a multi-religious, multi-cultural single entity in which it is better to remain true to your native religion. In Mongolia,” His Holiness said, “I became aware of the proselytising activities of Korean missionaries and when they came to see me I told them that Mongolia is a Buddhist country and it would be better for them not to propagate another faith there.”

Looking to the future, he expressed a hope that coming generations would receive a proper education, one that not only imparts knowledge to the brain, but also nurtures warm-heartedness in individuals. He noted how many leaders are prepared to lie and deceive and that education is the key to correcting this. He said that while faith is one thing, secular ethics should naturally appeal to human intelligence. The human values they represent are the basis on which to build a peaceful more compassionate world.

In his closing remarks, His Holiness noted that both former Prime Minister Wen Jiabao and imprisoned human rights activist Liu Xiaobo have spoken of the need for a freer and more open society in China and it would be good if countries that are free to do so expressed their support.

Professor Stuart Rees acknowledged MP John Kaye’s help in organising the event and thanked His Holiness for taking the time to come. Many friends and well-wishers expressed their warm support for His Holiness as he made his way out of the NSW Parliament House, from where he drove to Sydney airport and boarded a flight to Melbourne.

The article continues to describe the second half of His Holiness’s day, with a public talk to 5800 people in Melbourne. Please click here to read the full article.

This article is written by the Dalai Lama office – published from Melbourne, Australia, 18 June 2013. Catch more news from His Holiness the Dalai Lama here: http://www.dalailama.com/news

In 2002 the Sydney Peace Foundation awarded His Holiness the Dalai Lama a Gold Medal in recognition of his untiring work for human rights, non-violence and world peace.

His Holiness was the second person to receive the Sydney Peace Foundation Gold Medal, following Nelson Mandela in 2000, and to be followed by Daisaku Ikeda in 2009, Julian Assange in 2011, and posthumously to Stephane Hessel in 2013.