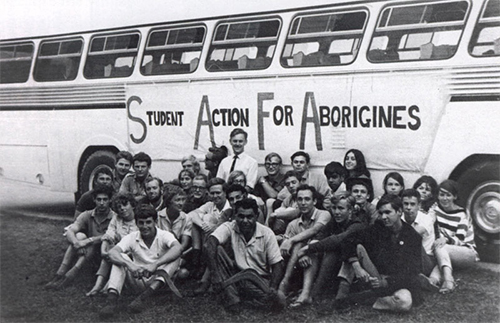 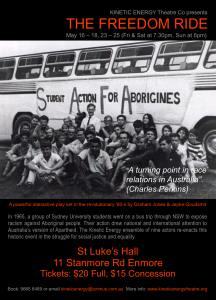 From the creative talent who brought you Empire, Kinetic Energy Theatre Company brings you: Freedom Ride.

The story of the FREEDOM RIDE is relevant to the following curriculum areas: History, Legal Studies, Drama, English and Aboriginal Studies. It is an historical re-enactment informed by the language and cultural behaviour of the time, and draws attention to the question of racism today, and elements of racism in the Australian Constitution.

The play is based on the following major sources: Professor Ann Curthoys’ book “Let’s Have A Freedom Ride”, Darce Cassidy’s audio recordings of the events, and Charles Perkins’ biography “A Bastard Like Me”. From this material, combined with music, jive-talk and other cultural aspects of the time, Kinetic Energy Theatre Co’s co-directors have created a powerful and entertaining interactive play.

We show the lead up and preparation by the Sydney University students, and then zoom in on events transpiring in the town of Walgett. We portray the key people who were there: the great Aboriginal leader Charles Perkins, the famous Aboriginal woman Pat Walford (best known for her “I’m black and I’m proud of it” speech in Walgett), student leaders Ann Curthoys and Jim Spigelman, Wendy Golding and Darce Cassidy. Several small parts are played by volunteers chosen and briefed on the day, such as the Aboriginal ex-serviceman who is denied entry into the Walgett RSL, or the manager of the Oasis Hotel-Motel who is afraid to lose business if he allows ‘blacks & whites to mix’. There are eight volunteer parts in all. This active participation is highly educational and has an immediate, positive effect on the audience: the story becomes their story.

We look at the tools of the global peace movement: non-violent direct action, as initiated by Mahatma Ghandi and Martin Luther King. And we are left with some nagging questions: What was achieved? Does the reality lived by Aboriginal people today correspond with their rights won then, and since then? Are these achievements just on paper? What is indigenous struggle about now?

By bringing this famous event from our Australian history to life through drama and song, our audience gains insight into what it is like to be marginalized and dispossessed, and to be denied your human rights. It is a joyful and inspirational story of courage and conviction, one that brought many Australians together in a shared cause. It taps into the courage needed to stand up for those rights, and shows the importance of engagement and debate as instruments to overcome ignorance. It invites us all to be an active part of that debate.

United Nations Declaration on the Rights of Indigenous Peoples, 2007: Sets out the individual and group rights of indigenous peoples, to their culture, identity, language, employment, health and education.

United Nations Convention on the Rights of the Child, 1989, Article 30: Children have the right to learn and use the language and customs of their families, whether these are shared by the majority of people in the country or not.

Village Space is a joint venture of Kinetic Energy Theatre Company and the educational branch of Catholic Mission (for their social justice & human rights curriculum), and is sponsored by Catholic Mission. Kinetic Energy has developed this interactive issue-based theatre format over the last 11 years and covered a range of social justice subjects. Our 2014 program comprises two plays, namely “THE FREEDOM RIDE”, and “WHERE IS MY HOME?” (about asylum seekers and refugees). These are available to schools, universities, targeted communities and conferences, in NSW, Queensland, Victoria and Tasmania.