Ode to Syria: An Evening of Syrian Arts and Music with Award-Winning Composer Malek Jandali 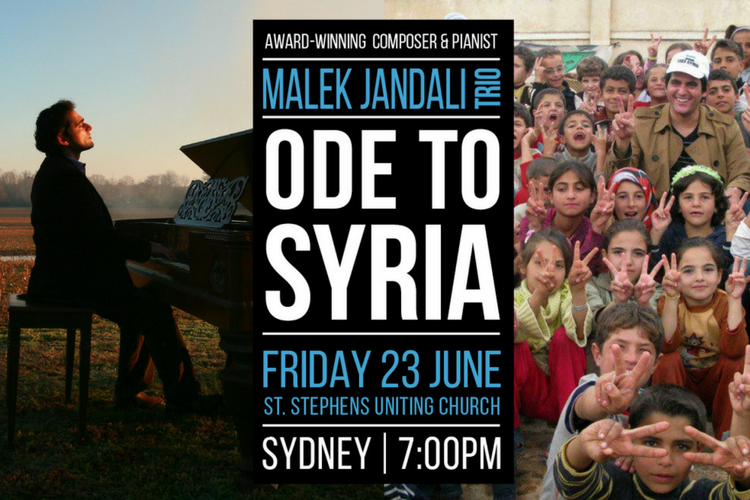 With contributions from Jorge Aroche (STARTTS) and the Choir of Love

Inspired by his homeland, the Syrian people, and their quest for freedom and human rights, Malek Jandali’s music gives a voice to the resilience and hope of the children he met in refugee camps:

“I believe that everyone has the tools to help, but each person’s tools are different. Mine happen to be music and art, and I feel very blessed and humbled to have the opportunity to use my music to help the children of Syria in this way.”

His concerts have captivated audiences around the world, and on this special night during his first-ever visit to Australia Malek Jandali will lay bare the personal side to his music, reflecting on the inspiration and emotion behind his works.

This major event, expected to be a highlight of Refugee Week,  is part of Malek Jandali’s Debut Australian Tour, where he will premiere original selected works featuring the Malek Jandali Trio. Jandali’s works integrate ancient melodies from Aleppo and the Silk Road into works that are preserving and presenting the musical heritage of Syria.

German born, Syrian-American composer and pianist Malek Jandali is a leading figure in today’s music world. He was honoured with the 2013 GUSI International Peace Prize and the 2014 Global Music Humanitarian Award for his ongoing world tour “The Voice of the Free Syrian Children” and dedication to peace and humanitarian causes. In 2015 he founded Pianos for Peace, and was recognized by the Carnegie Corporation of New York alongside Itzhak Perlman as a Great Immigrant for his contributions to society. He has performed with orchestras including the Royal Philharmonic, Zagreb Philharmonic, The Stockholm Solister, and on major concert stages in London, New York, Vienna, Madrid, and Dubai. See full bio at: http://malekjandali.com