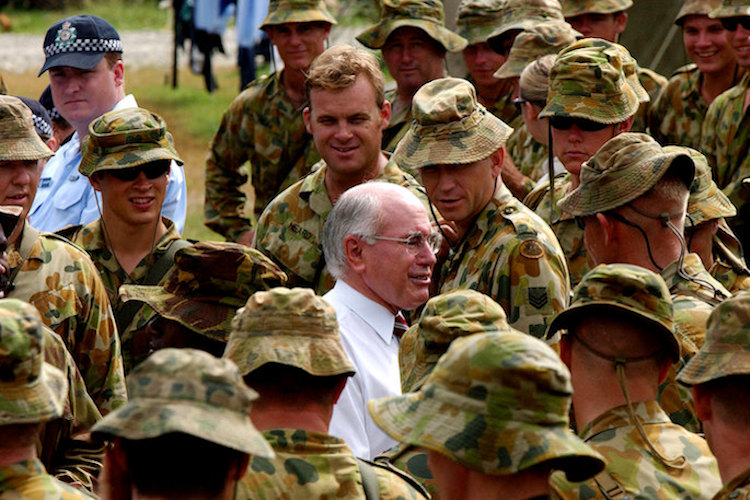 John Howard’s reflections on the war in Iraq have made news lately, with objections dismissed as anti-democratic. We need an inquiry into why Australia supported a disastrous and illegal invasion, writes Stuart Rees

Inside the Intercontinental Hotel on Tuesday 9 April, former prime minister John Howard justified his decision to accompany the US in the invasion of Iraq in 2003. He compounded his falsehoods with various claims about the benefits for the Iraqi people.

Outside the Intercontinental, a large crowd heard speakers decry those former war leaders – Bush, Blair and Howard – on the grounds that their actions amounted to a war crime, which should see them charged and in the dock in the Hague.

When the US and UK with Australian support invaded Iraq, they were egged on by cheerleaders in the mainstream media. Questioning the grounds for war was treated as treasonous in the USA. In the UK and Australia, Blair, Howard and their supporters also dismissed the widespread public protests as of no consequence. They knew best. Even in a democracy, leaders such as they need not heed a largely unanimous public voice opposing the war.

The same head in the sand responses from influential figures surrounding Howard and from the media were on display on Tuesday. Michael Fullilove from the Lowy institute introduced Howard and characterised the protesters outside as an anti-democratic mob who wanted to shut Howard down. The following morning an anodyne account of the meeting – by Deborah Snow in the Sydney Morning Herald – gave little content and no context: an impression that Howard received no questions and that in the hotel, the derision from protesters outside was not part of the chemistry of the occasion.

There were as many people at the protest as inside at the Intercontinental, but the latter was ignored by representatives of the mainstream media. They continue to write and speak as though the former PM must be treated uncritically and an Australian tradition must be continued: to deride critics of military escapades, to utter platitudes about the wonders of our armed forces.

There is a message in Howard’s self justification: “Forget the carnage in Iraq. The last thing we need is an inquiry. We have nothing to learn.” The same arrogance contributed to the worst foreign policy decision in centuries. A glimpse inside Howard’s world tells us why an inquiry is needed.

Like a conjurer able to pull almost anything from a hat, Howard argues that because Saddam Hussein was a proven bad man, therefore he must have had access to weapons of mass destruction, therefore his friend George Bush could suspect Saddam of having a hand in 9/11, therefore he was a terrorist, hence the logic of regarding the government in Iraq as a threat to Australia. Ten years after the invasion, Howard’s casuistry in crafting such an explanation beggars belief.

After listening to Howard’s address in the Intercontinental, a former high ranking diplomat commented, “The disturbing thing was that he’d convinced himself that he was speaking the truth.”

Even more sinister is the belief held by Howard and his supporters, including the former foreign minister, known at the time as Lord Downer of Baghdad, that they know the truth about life in the newly democratic Baghdad. “Generally the people of Iraq are grateful for the invasion is one message.”

By contrast, a regular visitor to Iraq, the courageous Donna Mulhearn, says, “People live in poverty as never before, they seldom have electric power, the defects of newly born children in a city like Fallujah are horrific and in many regions people are as fearful of this government as they might have been of Saddam.”

“Democracy is taking hold,” says Howard, and “Saddam’s overthrow was possibly the event that encouraged the Arab Spring.” The events in Tunisia which were the catalyst for Arab uprisings occurred nine years after the downfall of Saddam. Howard’s reasoning in 2013 is as dodgy as Tony Blair’s was in 2003.

Back to the claims about the flourishing democracy which the allies have bequeathed to the Iraqi people. It looks more like a theocracy. Politicians in the ruling party take instructions from religious leaders. Women’s rights have gone back 50 years. Torture chambers are active in the basements of police centres and at least 5000 people are held in prison without charge.

A test of any individual’s common humanity depends on whether he or she can summon sufficient humility and courage to admit to an error, to say, “I’m sorry, I was wrong, I’m willing to reflect and learn.” Such an admission is a means of healing even when only one person has been seriously injured or has lost their life. Reading articles in The Australian about Howard’s Iraq war reflections and listening to his Tuesday address, you could be forgiven for thinking that hardly anyone lost their lives, that suffering was almost non-existent.

A different truth was conveyed to the “anti-democratic mob” outside: perhaps as many as a million Iraqis died, a figure in complete contrast to the official Orwellian references to 100,000 deaths, a phony number, albeit explained by US General Tommy Franks’ claim, “We don’t do body counts”. The protest rally also heard the familiar figures that almost 5000 US soldiers died and 30,000 were wounded, that at least three million Iraqi citizens became refugees, many of whom still fear the current Iraq regime and prefer therefore to remain in squalid camps in other countries.

The arrogance of western warmongers enables them to behave as though they are not accountable to international law. Not only that, they can also make small fortunes from writing books and giving lectures about their conduct. One law for Africans says Ugandan President Museveni, another for the white Protestant and Catholic leaders. He has a point. The only leaders who have been hauled before the International Criminal court for war crimes have been from Africa, Serbia or Croatia. The rest don’t count.

The need for inquiry into the means of taking Australia into a disastrous and illegal war is not about a former prime minister being held accountable to international law. The country needs a change in the war powers to stipulate that Australian troops can never go to war again without proper public and parliamentary debate. An inquiry could also revive understanding of the core features of a civil and democratic society.

Australia would benefit from hearing the truths about that decision to go to war in Iraq. We also need to remember the consequences of our own aggression. The success of such an investigation will depend on a continued unmasking of the assumptions which bolster John Howard’s world.