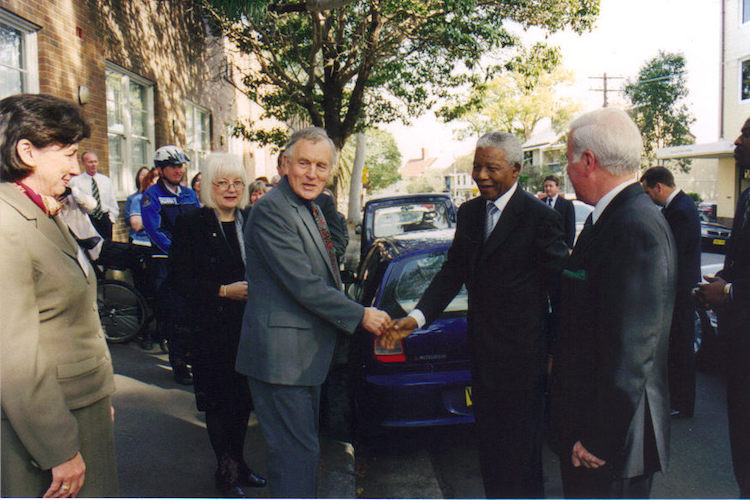 The Centre for Peace and Conflict Studies and Sydney Peace Foundation remember and honour the life and contribution of Nelson Mandela, former President of South Africa, who died peacefully at his home on 5 December 2013.

We join South Africans everywhere in celebrating the visionary yet humble man who displayed great wisdom, courage and compassion in leading his country in the difficult transition from apartheid through a process of dialogue and reconciliation to a united and democratic ‘rainbow nation’.

In September 2000, Dr Mandela was awarded an honorary Doctor of Laws by The University of Sydney in recognition of his leadership in the struggle for peace and justice in South Africa, and he visited the Centre for Peace and Conflict Studies (CPACS) for a special award ceremony organised by the Sydney Peace Foundation.

Nelson Mandela presented Dr Stella Cornelius, founder of the Conflict Resolution Network, and Dr Faith Bandler, campaigner for indigenous rights in Australia, with certificates for their dedication and achievements in conflict resolution and education, and the then Director of CPACS and the Sydney Peace Foundation, Professor Stuart Rees, presented Nelson Mandela with a Wallabies rugby shirt as a gift to remember his visit to Australia!

The following article appeared in the October 2000 issue of CPACS newsletter, PeaceWrites:

On 4th September, Nelson Mandela came among us! For an hour we were enthralled by his noble presence, his words of encouragement, his wisdom and message of hope. In an impromptu discussion on reconciliation, he drew upon a life-time’s experience dedicated to the attainment of peace with justice.

“Reconciliation” he told us, means to “ensure that we eliminate tension in society” in order to “create an environment where people appreciate the gifts and talents of each other.” There is a need to “forget the past – we are not very responsible for the past but we are responsible for the present and the future.”

For a special sixty minutes he made the Centre his home, and us his friends. Since his visit, our work has taken on a new energy, a sense of commitment and optimism that we are on the right track, however long and winding the path.

Dr Mandela engaged directly with members, students and friends of CPACS and the SPF during his visit to the Mackie Building. Mingling in the Posters for Peace Gallery was accompanied by the opportunity for each of us individually to approach Dr Mandela with our questions during a special session in Seminar Room 114. As a PhD student and volunteer with CPACS at the time, I was privileged to participate and discuss briefly with Dr Mandela my research on the challenges of justice, reconciliation and peacebuilding after the 1994 genocide in Rwanda.

This poem by Stuart Rees, published in the October 2000 issue of PeaceWrites, was inspired by Nelson Mandela’s visit to the Centre: 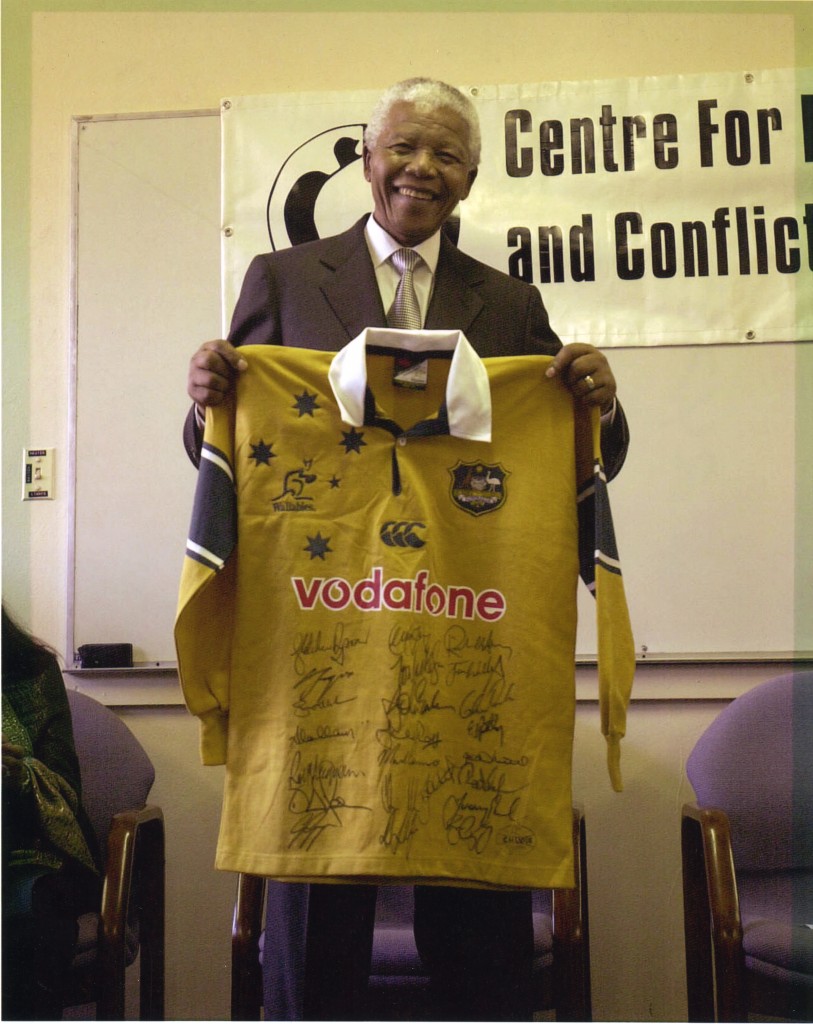 The build-up was like waiting for a bride
To give the cue for all to stand and gaze
At groom already married to ideals,
A handsome suitor armed with selfless deeds,
Like laughter at the shirt he’s asked to wear
In stripes of Africa’s opposing team,
So Gandhi-like he teaches you and me
To shower with love each polar enemy.
A sonnet is too short to catch this man
Of sunlight on the global seas of grey
Whose poverty condemns and disempowers
The millions who would lift and be inspired
By being here to breathe, to learn, to see
This beacon light for all humanity.

It seems appropriate to celebrate the poet and statesman, Nelson Mandela, in this way as we mourn his passing at the age of 95, reflecting on a life so well lived. An inspiration to us all!