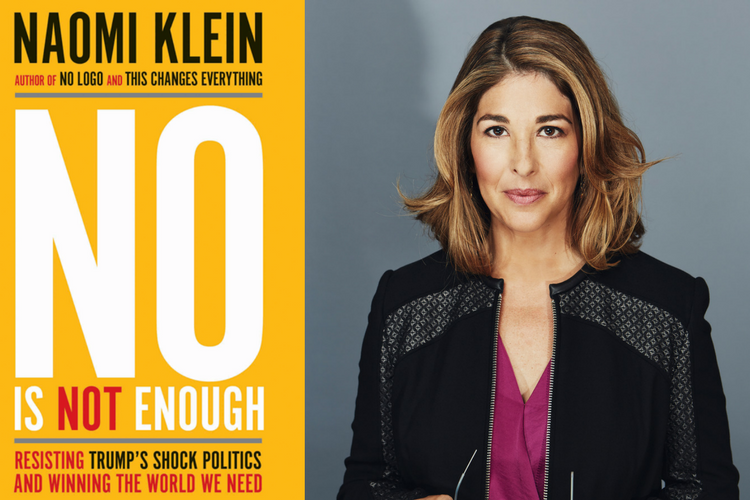 “No is Not Enough”: New book on resisting Trump by 2016 Laureate Naomi Klein

Next month 2016 Sydney Peace Prize recipient Naomi Klein is releasing her new publication No is Not Enough: Resisting Trump’s Shock Politics and Winning the World We Need!

We already know that the Trump administration plans to deregulate markets, wage all-out war on “radical Islamic terrorism,” trash climate science and unleash a fossil-fuel frenzy. It’s a vision that can be counted on to generate a tsunami of crises and shocks: economic shocks, as market bubbles burst; security shocks, as blowback from foreign belligerence comes home; weather shocks, as our climate is further destabilized; and industrial shocks, as oil pipelines spill and rigs collapse, which they tend to do, especially when enjoying light-touch regulation.

All this is dangerous enough. What’s even worse is the way the Trump administration can be counted on to exploit these shocks politically and economically.

Designed as a “toolkit for shock-resistance”, Naomi writes that ‘culture jamming’ is the way to gain the upper hand on Trump. The empire he has built around his personal brand gives us leverage to resist his cruel and unjust regime, and may hold the key to forcing him to use his position as President of the United States to help people other than himself.

“This book [helps us understand] how we arrived at this surreal political moment, how to keep it from getting a lot worse, and how, if we keep our heads, we can flip the script and seize the opportunity to make things a whole lot better in a time of urgent need.”

Step 1: Fire the boss: If Trump’s personal brand is being the boss, make him look like a puppet.

Step 4: Be a nuisance: Jam the phone lines to Trump’s hotels with polite comments on Trump’s policy.

“If his brand gets battered enough, Trump might just course correct.”