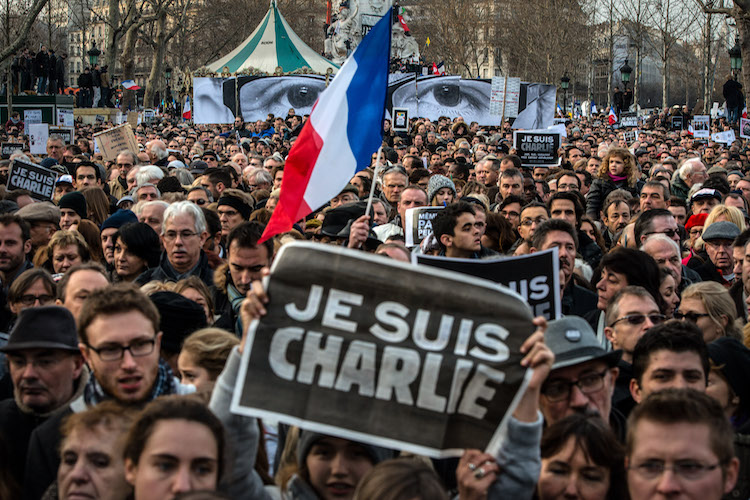 In the wake of the murders of staff from the French satirical magazine, Charlie Hebdo, it’s imperative to re-assert the indispensable function of a humour which contributes so much to civility in societies. Sydney Morning Herald cartoonist Sally Wilcox made the same point when she wrote, “I believe satire is where sanity is found”.

Over the centuries, at least in countries expressing humanist values and striving to become democratic, critics, including cartoonists, encouraged political and religious leaders to become less thin skinned about their societies’ sacred cows. Civility and humanism developed side by side.

In the 18th century, the Anglo Irish essayist and author Jonathan Swift, in the 20th century the American journalist H.L.Mencken, and in pre-war Germany the poet-playwright Bertolt Brecht contributed to such civility. Swift mocked the authoritarian rule of the English over Ireland and debunked those who appeared to be blindly devoted to certain beliefs. Mencken exposed those who thought they had discovered religious, commercial and political truth. Such truths, he said, were indistinguishable from a headache. Brecht challenged Nazism and authoritarianism in all its forms. In a poem, which sounds like a tribute to the achievements of all satirists, Brecht wrote ‘On The Critical Attitude’,

Give criticism arms
And states can be demolished by it.

Cartoonists and caricaturists, from Hogarth and Gillray through Low and Searle to Larson and Leunig, have consistently criticised and deflated pomposity and championed tolerance and humanity.

Satire acts as an antidote to authoritarianism, to bigotry and as a non-violent challenge to claims made for a myriad of ‘isms’ which nurture dogma and cannot tolerate doubt. The targets of satire are usually powerful individuals who are either unaware of the absurdity of the claims they make – the emperor has no clothes – or appear not to care about the human costs of their so called leadership.

Such leaders’ one dimensional mindsets nurture extremism. Of course, not all the proponents of extremisms resort to killing those who challenge them, but for centuries, the violence that accompanies defence of a particular form of power, religious or otherwise, has been expressed in the rack, the lash, the scaffold, the stake, the bomb and the gun.

At the end of last week 2000 citizens of Baga Nigeria were slaughtered by Muslim militants Boko Haram and a blogger in Saudi Arabia was lashed, with the promise of more to come, for questioning features of Islam and the attitudes of certain religious leaders. Such brutality can’t simply be named and condemned. It raises a key question about intolerance towards anyone who refuses to accept the precepts of powerful institutions, in this case particular types of Islam but it could be forms of Judaism, Christianity, Hinduism, Scientology, free market dogma, the Tea Party, Marxism or the claims of the flat earth society.

By all means avoid the cultural insensitivity which implies that all western democratic values should be adopted elsewhere. Remember also the significant achievements of Islamic culture in art, medicine, poetry and architecture and recall too that countries which are breeding terrorism – such as Saudi Arabia and Qatar – are some of the closest allies of the West.

But if diversity of views, tolerance of differences and freedom of speech are key features of universal human rights – to which almost all countries say they adhere – we should be able to question why certain deities are fit for satire and others are not. I shudder a little when commentators who condemn cartoons in Charlie Hebdo seem unaware that their own cultural thin skins might have been interpreted by extremists as a cue to embark on violent revenge.

The other side of such violence is a massive illiteracy about non-violence. The murderers of the Parisian satirists perhaps knew nothing about freedom of expression in art, film, music, dance, dress, social or political commentary. The idea that such forms of creativity contribute to physical and mental health must have eluded them. In common with suicide bombers and other killers, they must have preferred death to life, violence to laughter.

Extremists, including the Parisian murderers, cannot harbour doubt about their religious, political or moral views. In common with members of al-Qaeda, Boko Haram or ISIS, they apparently believed only in their dogma and in themselves. They would have been puzzled by Bertolt Brecht’s constant reminders that the understanding derived from satire can become a crucial means of individual and collective empowerment. In his poem ‘In Praise of Doubt,’ he wrote:

But the most beautiful of all doubts
Is when the downtrodden and despondent raise their heads
And
Stop believing in the strength
Of their oppressors.

Satire provides insight into the personal and the political. Without such insights, bemusement, fog, fatalism and ignorance prevail. For example, supporters of capital punishment somehow persuade themselves that executions show a reverence for life and for their version of freedom. When he was Governor of Texas, the God fearing George W. Bush seldom granted clemency to prisoners sentenced to death; and when invitations were issued for witnesses to Texas executions, there was seldom any shortage of volunteers, moved apparently by their moral, religious or political certainty. In response to such ghoulishness I argued that if there was more satire in America, the justifications for murder by the State would fall away. Such arguments fell on deaf ears.

A couple of years ago, in ABC televised interviews with prominent Arab women, I asked about the nature of humour in their respective countries. These were intellectually critical, high achieving women from fields of literature, business, drama, government and medicine. They gave engaging illustrations of social and economic developments in their countries. They appeared optimistic about the future. They had been confounding stereotypes about patriarchal authoritarianism in the Arab world until. Until I asked, ‘Let’s turn for a minute to the function of satire in your cultures ? What and who do you laugh at ?’

Silence followed. The interviewees looked bemused. No doubt aware that their answers might be broadcast around the world, they admitted that they could not even laugh at bigotry, at authoritarianism, at the down right sadists – in particular regarding the rights of women. Somewhat ironically, they did laugh when acknowledging that in their cultures, in public at least, there was little to laugh at.

Praising satire and saluting the slaughtered Parisian satirists, does not mean to say that any topic is fit target for such humour, or that any alleged humour could be labelled satirical. Laughter at absurdity is great medicine but attempting to make fun of the powerless is usually cruel and therefore out of bounds. Exposure of radio shock jocks’ bullying and derision of opponents could be and has been fit focus for satire. Even if they like to laugh at their own jokes, such radio men seem intent on promoting views which are seldom funny. For example, Alan Jones’ pillorying of Bob Brown and Julia Gillard was humourless, cruel, contained no irony but did verge on encouraging violence.

The assassinations in France remind us that those journalists were continuing centuries of struggle to show that satire is salutary, that non-violence is crucial, that freedom of expression is not only part of French notions of liberty but is also an international torch to be held aloft.

Following Charlie Hebdo’s example means not being half hearted about freedom of speech. No holds barred irreverence may be problematic but self censorship can mean a blind eye to intolerance. The ink of satire must continue to flow. Nous sommes tous Charlie.