For her courage in campaigns for human rights and for her advocacy of non violence, as expressed in her demands for justice for the poor, for the victims of communal violence, for the millions displaced by the Narmada dam projects and by her opposition to nuclear weapons. 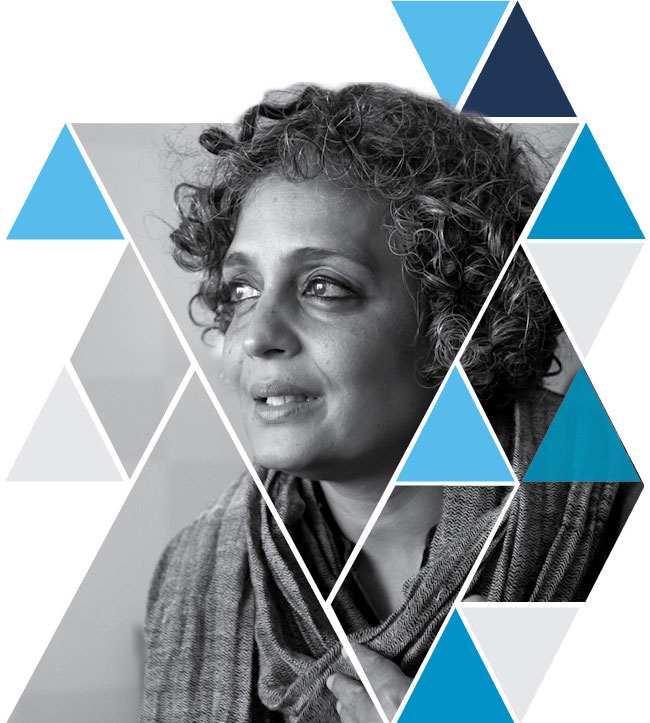 On 4 November 2004, Her Excellency Professor Marie Bashir AC, the Governor of New South Wales, presented the 2004 Sydney Peace Prize to Arundhati Roy. The Award Ceremony was held at McLaurin Hall at the University of Sydney.

Arundhati Roy is a renowned author and human rights activist. Her writing, precise and powerful, highlights her commitment to social, economic, and environmental justice.

From New Delhi, Ms Roy commented, ‘I am honoured to accept the prize’. On nonviolence as a criterion for the award, Arundhati Roy says

Today, in a world convulsed by violence and unbelievable brutality the lines between ‘us’ and ‘the terrorists’ have been completely blurred. We don’t have to choose between Imperialism and Terrorism, we have to choose what form of resistance will rid us of both.

What shall we choose? Violence or nonviolence? We have to choose knowing that when we are violent to our enemies, we do violence to ourselves. When we brutalise others, we brutalise ourselves. And eventually we run the risk of becoming our oppressors.

The Jury noted that Arundhati Roy is a distinguished world citizen, chosen for her opposition to the violence of poverty in India and for her commitment to the global cause of peace with justice. The Jury commended her for challenging the world with her writing, and for insisting that silence in the face of injustice is indefensible: “Peace is not the opposite of war. Peace is the sibling of justice.”

Ms Roy is perhaps best known for her Booker Prize-winning novel, The God of Small Things, which is part autobiographical and catapulted Roy to international fame.

Since publishing The God of Small Things in 1997, Roy has spent most of her time on political activism and writing nonfiction, largely on social causes. Her second novel, The Ministry of Happiness will be released in 2017. Ms Roy is a spokesperson of the anti-globalisation movement and a vehement critic of neo-imperialism and US. foreign policy. She opposes India’s policies towards nuclear weapons as well as industrialisation.

We know of course there’s really no such thing as the ‘voiceless’. There are only the deliberately silenced, or the preferably unheard.

Without the violation of human rights on an enormous scale, the neo-liberal project would remain in the dreamy realm of policy. But increasingly human rights violations are being portrayed as the unfortunate, almost accidental fallout of an otherwise acceptable political and economic system.