For inspiring the convictions of millions about a common humanity and for unfailing moral courage. For critical analysis of democracy and power, for challenging secrecy, censorship and violence and for creating hope through scholarship and activism to promote the attainment of universal human rights. 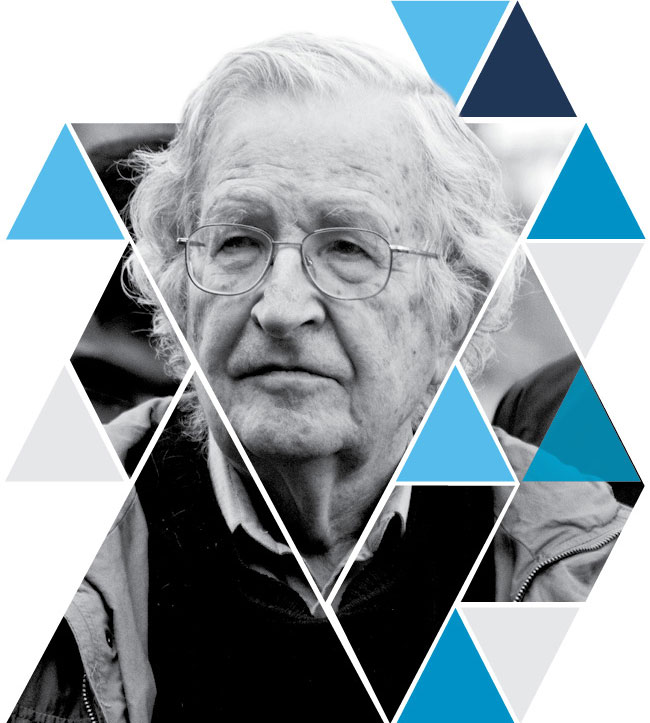 On 3 November, the 2011 Sydney Peace Prize was presented to Professor Noam Chomsky by 2008 Peace Prize Laureate, Patrick Dodson, at the McLaurin Hall at the University of Sydney.

On Wednesday 2 November, a 2000-strong crowd at the Sydney Town Hall were eager to show their appreciation to Professor Chomsky, whose life’s work as a challenger of unjust power has lent influence and inspiration to activists world wide.

Professor Noam Chomsky is often described as one of the West’s most influential intellectuals in the cause of peace, and the most significant challenger of unjust power and as an individual who is not only brilliant but heroic. Chomsky first became widely known through his work on modern linguistics especially his theory of a universal grammar. Since the 1960s, when he opposed the Vietnam War, he has forged a reputation as a political activist or “libertarian socialist”, especially as a critic of American foreign and domestic policy. He has written more than 150 books.

The award to Noam Chomsky came at a time of violence and protest around the world. Across the Middle East brave people challenged authoritarian rule, yearned for human rights and for a state of their own. Yet instead of deliberating on how we might also foster dialogue about justice, Australia was producing an ugly state of politics. Those who expressed the needs of the planet and of vulnerable people were demonised by radio commentators, demeaned by powerful leaders, and even threatened in the streets. In contrast to those developments, the Jury’s choice for Noam Chomsky produced a great opportunity to promote inspiring conversations about peace with justice.

The Peace Prize Jury noted that for more than 50 years, Chomsky has been a world champion of freedom of speech, of the value of transparency in government and the need to challenge secrecy and censorship. In his study of the political economy of human rights, he exposed state crimes, induced by US foreign policy, across South America, the Middle East and South East Asia. The committee applauded Chomsky for challenging abusive uses of power with unfailing moral courage, and for commitment to the principle that forces for change should be nonviolent.

The Jury also commended Professor Chomsky for his dual role as an activist as well as intellectual and would not separate those responsibilities. Urging academics to find the courage to move far beyond the ivory tower, he hopes they can play a fuller role as citizen educator — about human rights, about violent militaristic ways of thinking and acting, about those peace with justice issues, such as poverty and hunger.

Chomsky’s intellectual stature has been compared to that of Galileo, Newton and Descartes. His influence has been felt in fields as diverse as artificial intelligence, cognitive neurology, music theory, anthropology, law and theology. His moral stature has been described as prophetic. He was the only scientist or philosopher on the White House ‘Enemies List.’

During his stay, Noam Chomsky delivered lectures and answered questions about economics, history, international relations, linguistics, philosophy, justice and much more: What is unique about human language? How is it related to core components of human nature: cognition, moral judgment and other human activity? How can peace in the Middle East be achieved? What does the rise of China mean? What ought to be done about global economic problems? Is there a difference between a terrorist and a freedom fighter?

An edited book was published, reconstructing Chomsky’s extemporaneous talks, informal notes, interviews and transcripts during his few days in Sydney, Melbourne and Adelaide.

Ideas at the House: “Problems of Knowledge and Freedom”
Noam Chomsky’s in conversation with Mary Kostakidis