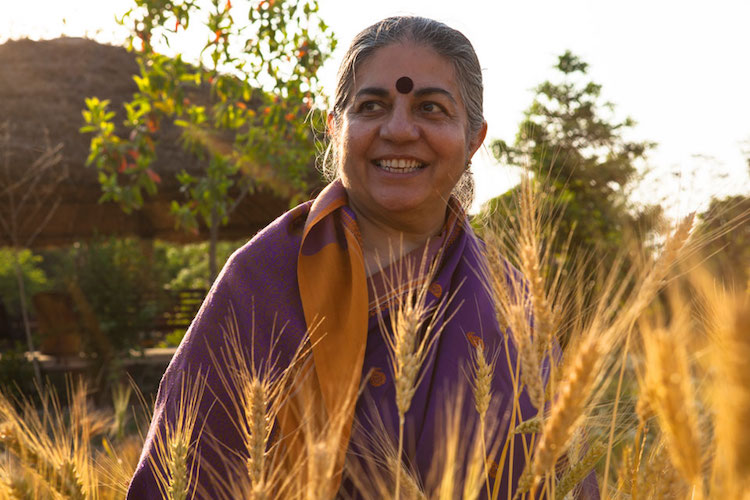 By Dr Vandana Shiva, recipient of the 2010 Sydney Peace Prize

We live in times whose signature is violence – from the killing of 134 innocent children in Peshawar to the massacres of 2000 by Boko Haram in Nigeria and the 17 in Paris just in the last month.

We must condemn this violence. But we must do more and understand its roots. Violence erupting in unpredictable places against innocents is growing and when any process grows in society, humanity needs to reflect on what is feeding it, from where does its nourishment come, and what can we do to stop the future explosion of violence overtaking the serenity and stability of everyday life, everywhere in the world.

Most analysis essentializes violence and makes it intrinsic to particular cultures. The dominant analysis based on fragmentation and reductionism, separates actions from their consequences. It allows no responsibility for the structural violence done to societies through wars and a globalized economy that has all the features of a war.

But violence is not essential to human beings or a particular culture. Just like peace, it is cultivated – its seeds are sown. We as humans across our cultural diversity and across our histories have potential to be both violent and peaceful.

The nourishment to the epidemic of violence in our times comes from structural violence of war, dispossession, uprooting and exclusion. It comes from robbing people of meaning, dignity, self-respect, security. This robbing of meaning, rights and dignity rooted in the diversity of cultures humanity has shaped, creates an inner vacuum which is filled with manufactured identities of a fundamentalist kind. Instead of identities growing positively and holistically from a sense of place and culture, identities get engineered into negative identities, defined only as the negation of the other.

The spread of wars and ecologically and socially disruptive globalization is uprooting people everywhere. The ultimate unfolding of this logic based on negative identities is extermination of the other. Powerful actors who have unleashed wars in Afghanistan and Syria do not take responsibility for the uprooting and brutalization of communities. In just one year, from mid 2013 to mid 2014, 3 million refugees have been forced out of Syria, 2.6 million from Afghanistan, 1 million from Somalia, and .5 million from Sudan. And even those who could not leave their homes as refugees have been made cultural and economic refugees by robbing them of their security and stability. Brutalized human beings spread brutalization.

Samuel Huntington, famous for his ‘Clash of Civilizations’, got it wrong when he said ‘we can only know who we are, when we know who we hate’. In India, the exercise of breathing with consciousness, ‘pranayam’, invokes ‘so hum’ – ‘you are, therefore I am’. We sow the seeds of peace every time we remember and celebrate our dependence of the ‘other’. Being open to the ‘otherness’ of the other creates conditions of compassion, peace, and wellbeing of all.