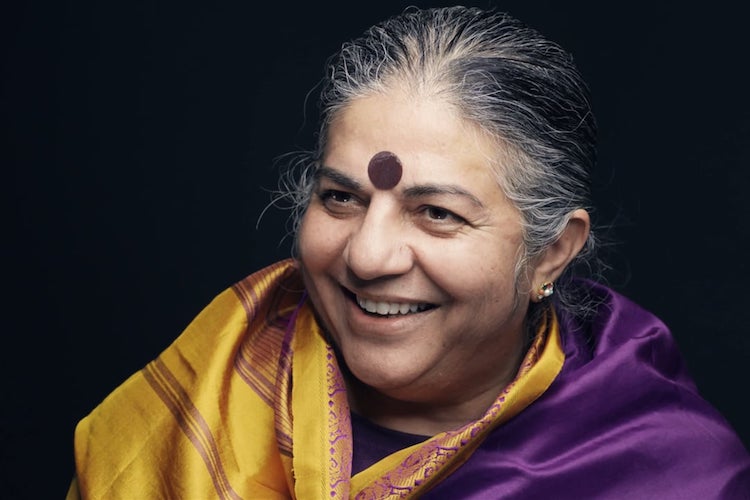 VANDANA Shiva’s journey from nuclear physicist to eco-feminist began with a trek in the Himalayas. Before beginning a PhD in Canada, she took a walk in the mountains where she had spent countless hours as a child trailing her father, a forest conservator. But the young student of quantum theory found things had changed. ”I went back to trek in my favourite mountains before leaving for my doctorate but the forests were gone and the streams were dry,” she says. ”It was a deep shock for me.”

Shiva, who grew up in the Himalayan foothills, spent subsequent university breaks as a volunteer with the Chipko movement, a local women’s group famous for hugging trees to protect them from being felled. The forest women taught her ”practical ecology” and inspired a change of direction. Despite training as a nuclear physicist at an elite Mumbai research reactor and then gaining a PhD in quantum physics from a top overseas university, Shiva switched her attention to environmental activism.

”I went from nuclear science to quantum physics and then to being a natural philosopher,” she says. ”I would describe my vocation as a combination of natural philosopher – the old, old notion of trying to understand nature in all its complexity, which is the original form of science – and as a protector of the earth.”

Shiva’s attempts to protect the earth have brought her into regular conflict with big corporations, especially those patenting genetically engineered seeds.

Shiva, 57, says this ”bio-piracy” is an attempt to hijack the global food supply. In response, she sued one of the seed firms, Monsanto, and also founded Navdanya, a national network of ”seed savers” and organic farmers. It has helped set up 55 community seed banks to preserve traditional seeds and trained more than half a million farmers in sustainable agriculture. Those wanting to learn about organic farming can sign up at the Bija Vidyapeeth or School of the Seed.

”For me seed saving became a way of defending freedom in the face of patents and trade rules which to me sounded like a totalitarian regime,” says Shiva. ”We can’t have freedom if we don’t have seed freedom.”

Shiva met The Age at an organic cafe run by Navdanya inside a popular New Delhi crafts market. On the menu were dishes made from ”forgotten” crops such as amaranth, jhangora and ragi. Navdanya promotes the use of little-known pulses and grains in a bid to promote biodiversity.

”So many foods have gone out of use and often they are very nutritious and good for conservation,” she says.

Shiva’s campaign to save traditional seed varieties is one reason she will receive the Sydney Peace Prize on Thursday. The jury awarded it to her for ”courageous leadership of movements for social justice – the empowerment of women in developing countries, advocacy of the human rights of small farming communities and for her scientific analysis of environmental sustainability”.

Shiva grew up in Dehra Dun, a bustling town in the foothills of the central Himalayas. She says her parents were feminists, even though the word didn’t exist at the time. ”That was their thinking and practice and I think it seeped into us,” says Shiva. ”My inspiration for life is our parents; so many of the values we have come from them … they told us that if you live by your conscience there is no reason to be afraid. That’s how I have been able to take on the likes of Monsanto, never having an equation of fear in my head to assess what I should and should not do.”

Social activism runs in the Shiva family. Her sister Mira is a medical doctor and well-known Indian health activist, and her brother, a retired air force pilot, does voluntary work for Navdanya. Shiva also has an adult son named Kartikeya who is a photographer in Mumbai.

The Shiva sisters have recently campaigned jointly on some issues including GM food. ”Even though we have walked very different paths – my sister in health and me in agriculture – we now work very closely together,” says Shiva.

Shiva’s mother, Jagbir Kaur, was a committed Gandhian. She once visited the mahatma when he was jailed in Pune and insisted that the family wear clothes made of locally spun cotton. Before her seventh birthday, Shiva asked for a nylon dress in a popular style. Her mother told her that buying a nylon garment would help ”get the next Mercedes for a millionaire” but buying one made from locally spun cotton would ”provide the next meal” in the house of a poor woman. ”She asked me to make a choice – it was my first lesson in political economy.”

Shiva also draws heavily on Gandhian philosophy to guide her work. She says he showed that people have ”the freedom to say no and the duty not to co-operate with unjust laws”.

What Gandhi did with salt ”we do with seeds” says Shiva in a reference to the mahatma’s famous salt march of the 1930s that marked the beginning of the end of British rule in India. ”I draw a lot of energy from my work because it’s what my conscience is telling me to do,” she says. ”If you do the right thing, you don’t deplete yourself.”

Shiva’s work with the women of Chipko shaped her first book, Staying Alive, which was published in 1988 to international acclaim. It drew parallels between the oppression of rural women and environmental destruction in India and established Shiva’s reputation as a leading eco-feminist thinker. She later co-wrote a book called Ecofeminism with sociologist Maria Mies. Shiva describes eco-feminism as a ”philosophy of inclusion” and is critical of what she calls a ”catch-up model” of feminism where women are in a battle to simply mimic men.

”Combining nature’s liberation and women’s liberation shows a different path that is good for all beings on earth,” she says. ”Eco-feminism is about giving both nature and women their rightful place.”

Shiva is also well known for her criticism of the ”green revolution”. Many in India argue the fertilisers, pesticides and genetic engineering that combined to create the green revolution rescued the country from regular famines and a reliance on food imports.

However, Shiva believes high-tech agriculture is only a short-term solution that will ultimately destroy farmers and the land. She warns that the threat of violent conflict over basic resources, especially water, is increasing thanks to the subcontinent’s unsustainable farming practices.

”When you run out of water it’s a recipe for killing,” she says. ”Water really makes people desperate.”

She also rejects orthodox economic analysis that says India must prepare for the massive migration of rural workers to the city as the country industrialises.

”If you take people and climate change seriously it’s just the wrong way to go,” she says. Shiva estimates that about 40 per cent of the world’s climate problem ”is related to industrial, globalised agriculture”. Therefore, she argues, 40 per cent of the solution requires labour-intensive forms of ecologically sustainable farming.

Shiva is disappointed that the debate about climate change is too often limited to temperature increases. She claims there is clear evidence that glaciers in the Himalayas are receding, and snowfall dwindling. She also believes India is experiencing more extreme weather.

”Focusing on temperature alone is not good enough. I never talk global warming, I talk about climate chaos,” she says.

Shiva has written a swag of books with gloomy titles including The Violence of Green Revolution, Biopiracy: the Plunder of Nature and Knowledge, and Water Wars: Privatisation, Pollution and Profit. But she is surprisingly optimistic about the prospects for change.

”There are huge reasons for hope,” she says. She cites many successful protests, including one that recently stopped plans to privatise water in Delhi, as proof that non-violent resistance can work. ”If you look at the negative things that have been stopped there’s reason for hope. But even more importantly, look at all the seeds that have been saved, the half a million farmers who have been trained in organic, and the growth in alternative movements all saying we will not go down the industrial path.”

Dr Vandana Shiva is the recipient of the 2010 Sydney Peace Prize. She will speak at a free Melbourne event next Friday, 6.15pm, at Collins Street Baptist Church. Bookings via wheelercentre.com

Written by Matt Wade, this article first appeared in the Sydney Morning Herald on October 30, 2010.