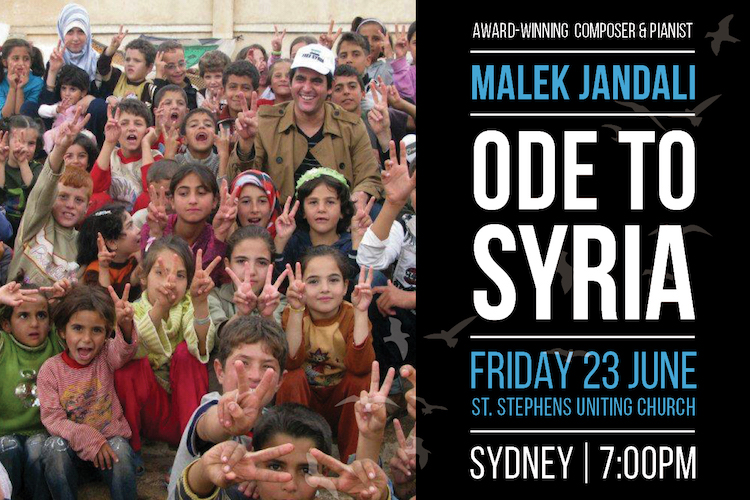 Jandali composes symphonies which integrate ancient folk melodies from Aleppo and the Silk Road to preserve the musical heritage of Syria.

“I’m trying to integrate these ancient melodies that Aleppo embraced into my symphonic, classic and chamber works in an effort to present it on an international stage,” Jandali told AAP.

“Someone in 200 years might say ‘what happened in Aleppo’ and someone can say ‘here’s how it sounds’ because there’s no Aleppo any more. The world is witnessing the eradication of Aleppo and total destruction, I’m trying to revive it and keep it alive through the music.”

The musician and composer makes his Australian debut this week for a series of concerts in Sydney to coincide with National Refugee Week.

Jandali left Syria in 1994 to study piano in the US. He has since become one of the first artists abroad to speak out against state oppression and the Assad regime, and has been awarded for his humanitarian work as well as founding Pianos for Peace, a non-profit promoting peace through music.

He returned to perform at a refugee camp in 2012 and last month travelled to the Za’atari refugee camp in Jordan, home to 80,000 refugees, where he performed in a benefit concert for Save The Children.

“Music evokes all these memories so when you have all these children and they hear a tune from their village or homeland, seeing that smile on their faces, or having them join us in singing the tune, that was just magical,” he said.

“You can sense the psychological effect of the war and being displaced and forced to leave home, it’s very tough. I could sense that in the children.”

His main goal is to spread a message of peace through music and give refugee children a voice.

“What we are trying to do through this meaningful concert and timely event is to unite all communities to change the narrative, make the art accessible to all and tell the world that these poor children are humans. We are trying to humanise their voice through music,” he said.

“The audience forgets the beauty of Syria and how beautiful it is, we only see the ugliness the bad news, the blood shed and the politics, how about presenting a beautiful piece about these innocent beautiful children and the music they have?”

*Malek Jandali will kick off a week of concerts and engagements in Sydney on Friday June 16 and will perform A Syrian Symphony for Peace in the Sydney Opera House on Saturday, June 24.

This article, written by Danielle McGrane (AAP) appeared on news.com.au on June 15.