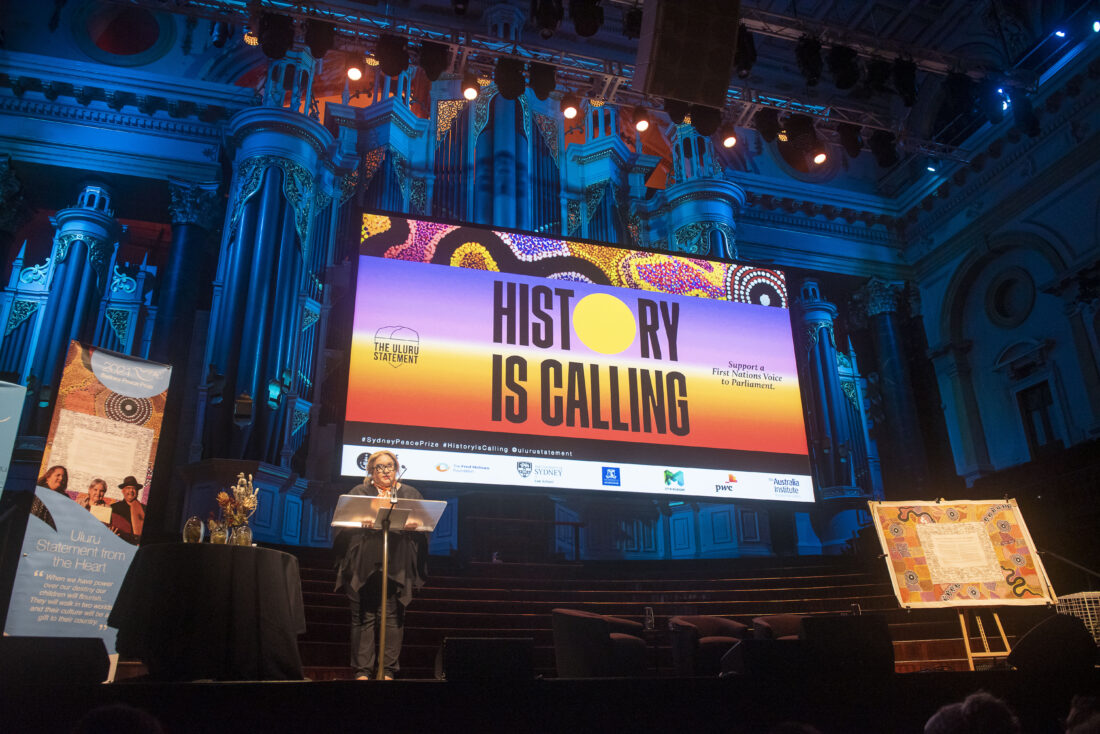 A push for First Nations recognition in the Constitution has been awarded Australia’s only international prize for peace – the Sydney Peace Prize.

The Uluru Statement from the Heart has been named winner of the 2021-22 Sydney Peace Prize, for its offer of peace from First Nations People to all Australians.

Calling for the establishment of a ‘First Nations Voice enshrined in the Constitution’, the Uluru Statement was voted winner of Australia’s only international prize for peace from over 200 community nominations.

The Sydney Peace Prize, which will be awarded to the Uluru Statement at an official ceremony on Thursday, 10 November, will be accepted by Alyawarre woman Pat Anderson AO, Cobble Cobble woman Professor Megan Davis, and Guugu Yimidhirr man and University of Sydney Law School alum Noel Pearson, who have played significant roles over many years shaping and advancing the aspirations in the Statement within Community and generally.

Teela Reid, First Nations Lawyer in Residence at Sydney Law School, celebrated the win and said it shone an important light on the Statement’s role in establishing an inclusive path to peace.

“I am delighted the Uluru Statement from the Heart has been named winner of this year’s Sydney Peace Prize. Not only does it acknowledge the importance of the Statement, but it is a win for the campaign.”

“The Statement is ultimately an invitation to all Australians, allowing us to walk together towards a better future. A First Nations Voice in the Constitution will have major, positive implications for the legal community, and will allow First Nations People to have a say in the laws and policies that impact them.”

Dean of Sydney Law School, Professor Simon Bronnitt, said the win was a major achievement for the Statement and testament to its influence as a fundamental step towards healing for all Australians.

“Sydney Law School is proud to be a partner and major sponsor of the 2021-22 Sydney Peace Prize. Last year, the School’s Board, representing its community of legal scholars and students, voted to formally support the Uluru Statement and called on the Commonwealth government to enshrine a First Nations Voice to Parliament in the Australian Constitution.”

“The Statement is a deserving winner of this year’s Peace Prize, representing the long deliberative process of the Uluru Dialogues and the decades of work that have happened to make a more just Australia. It was the catalyst for the upcoming referendum, which, if successful, will permanently represent Indigenous people in the Australian government.”

Over the next few weeks, several major events will be held to honour The Uluru Statement and the drivers of its development, Professor Megan Davis, Pat Anderson AO, and Noel Pearson, including the official award ceremony and lecture at Sydney Town Hall.

Professor Megan Davis will present the keynote address at the ceremony alongside journalist Narelda Jacobs, in conversation with Ms Anderson and Mr Pearson.

The University’s Vice-Chancellor and President, Professor Mark Scott, will also address the Sydney Peace Prize Gala Dinner – hosted by the Sydney Peace Foundation and the University – on Friday, 18 November. The event will see 800 attendees from across business, civil society and the community come together to celebrate The Uluru Statement from the Heart and to echo their support for a First Nations Voice to Parliament.

For over two decades, the Sydney Peace Prize has been awarded in partnership with the City of Sydney.

THIS ARTICLE WAS WRITTEN BY TESS GIBNEY AND FIRST APPEARED IN SYDNEY UNIVERSITY NEWS & OPINION ON 10 NOVEMBER 2022.