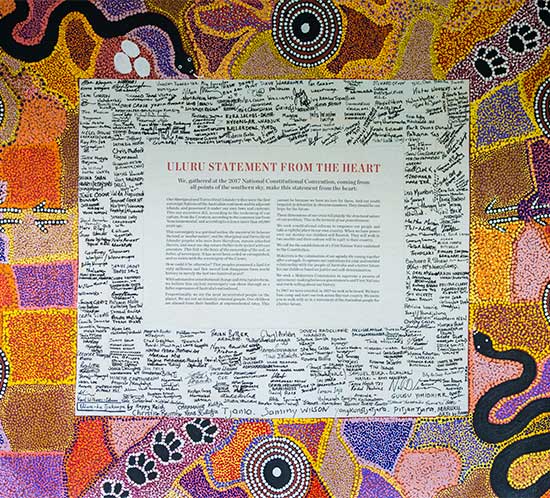 The Uluru Statement from the Heart has been named winner of the 2021-22 Sydney Peace Prize.

The Uluru Statement from the Heart calls for an established First Nations Voice to parliament enshrined in the constitution and the establishment of a Makarrata Commission for the purpose of treaty making and truth-telling.

Professor Davis, the First Nations lawyer in residence at Sydney Law School celebrated the win and emphasised how important the Statement’s role is in establishing an inclusive path to peace.

“I am delighted the Uluru Statement from the Heart has been named winner of this year’s Sydney Peace Prize. Not only does it acknowledge the importance of the Statement, but it is a win for the campaign,” Professor Davis said.

“The Statement is ultimately an invitation to all Australians, allowing us to walk together towards a better future.

“A First Nations Voice in the Constitution will have major, positive implications for the legal community, and will allow First Nations People to have a say in the laws and policies that impact them.”

It is the second time the Statement, which was issued in 2017, has won the prize.

The win was presented to Professor Davis, Mr Pearson and Pat Anderson at an official award ceremony at Sydney Town Hall.

THIS ARTICLE WAS WRITTEN BY EMMA RUBEN AND FIRST APPEARED IN NATIONAL INDIGENOUS TIMES ON 24 November 2022.