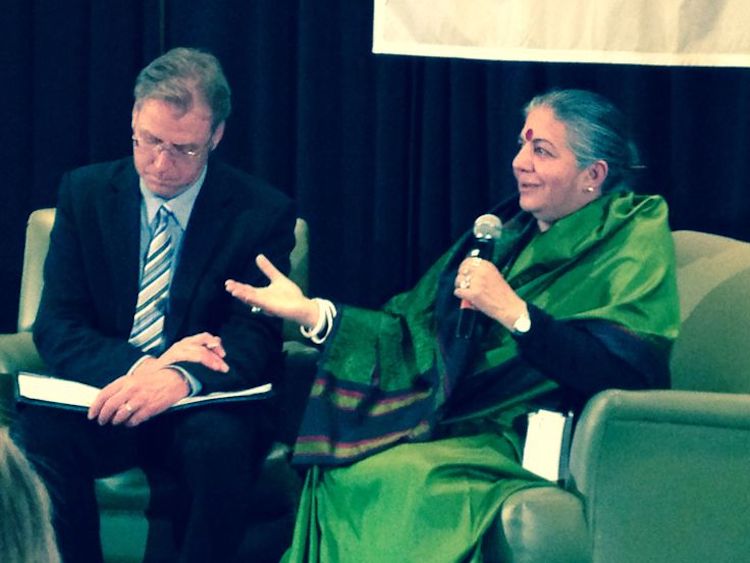 The important and inspiring work of the 2010 Sydney Peace Prize recipient Vandana Shiva continues in her fight to save seeds, farmers and food from corporate monopolies.

Renowned environmental and agricultural activist Vandana Shiva on Friday called on Canadians to fight the federal government’s Bill C-18, which she says will rob farmers of the right to save and exchange seed, and further corporatize the country’s food system.

“We’re calling on people around the world to not cooperate with – and declare a satyagraha against – laws like C-18,” Shiva said, referring to the strategy of non-violent civil disobedience pioneered by the late Indian activist Mohandas Gandhi.

“It’s part of a global movement to reclaim seed as a commons. To reclaim seed freedom, which for me is three things: the freedom of the seed itself, as a living being, in its diversity, integrity and evolutionary potential; the freedom of the farmer to save and exchange seed, and to have their contribution to breeding recognized; and the freedom of the eater to get good food, because without good seed, there is no good food. One of the curses of our time is bad food. So how can we reward the people who are ruining our food system with monopolies?”

Shiva, a key figure in the international anti-globalization movement, spoke Friday in Edmonton in a keynote address to a conference hosted by Public Interest Alberta, a left-leaning Alberta advocacy group.

Bill C-18, the Agricultural Growth Act, was introduced by federal agricultural minister Gerry Ritz in December. Ritz said at the time the bill will give seed companies additional control over the crops they develop and encourage them to invest in the production of new domestic grain varieties.

“Our proposed changes will encourage increased plant breeding investment here in Canada and encourage foreign breeders to sell their varieties to our farmers,” Mr. Ritz said in Winnipeg. “Farmers will benefit from improved access to innovative new varieties.”

If passed, the bill would adopt the 1991 convention of the International Union for the Protection of New Varieties of Plants, an intergovernmental organization known as UPOV. Canada currently abides by the 1978 version of the UPOV plant breeders’ rights convention.

In part, the updated plant breeders’ rights law would allow seed companies to charge royalties based on farmers’ production, and hold authority over the storage and cleaning of seed that farmers expect to reuse.

The bill is strongly supported by the Canadian Seed Trade Association, whose members include Richardson International Limited, Monsanto and Syngenta, among others.

The National Farmers Union (NFU) opposes the bill. The union says it will restrict farmers’ ability to save seed for replanting and allow seed companies to collect royalties based on harvests.

“Farmers will lose the right to save seeds and use that seed for next years crop, without having to pay a royalty to the plant breeder’s rights holder,” said Jan Slomp, a Rimbey, Alberta dairy farmer and president of the National Farmer’s Union, who attended Shiva’s talk Friday.

He said farmers already pay royalties when they buy certified seed and should be free to do what they wish with it thereafter. Changing the system will reduce the quality of breeding, leading to less disease resistance and produce fewer of the qualities that people – as opposed to corporations – need from food crops. Costs for farmers will inevitably go up, Slomp said.

“Why should people care about that? Either the farmer will go broke, or the food will get more expensive for people who eat,” he said.