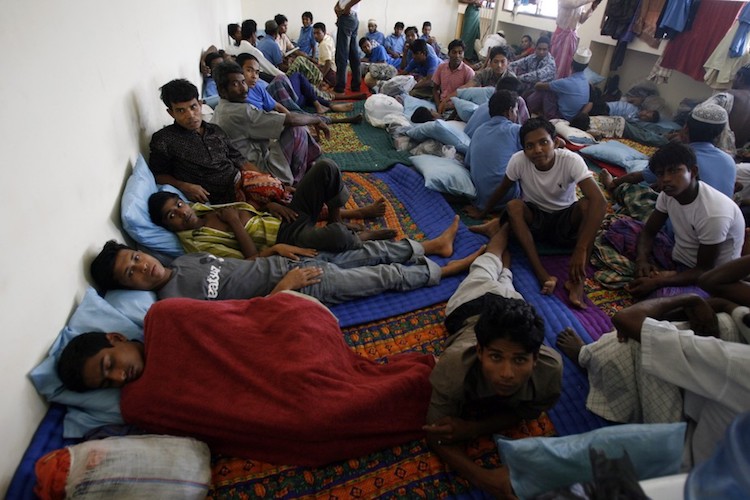 Last week Australia’s politicians determined to “do something” to stop people risking their lives at sea on asylum boats headed for Australia.

The government wanted a bill from independent MP Rob Oakeshott to pass because its ministers desperately want the boats to stop coming. Each new arrival is another nail in their political coffin. The opposition wanted the bill to fail because its members desperately want the boats to keep coming. Each new arrival is ammunition for them to fire at the government.

Both sides couched their arguments in humanitarian language: grief for those who died at sea last week and care for those contemplating the journey.

Both major parties have demonstrated their specific brands of “care and compassion” for boat people over the years.

The ALP introduced mandatory detention in 1991, amending legislation in 1992 to ensure a meddling judiciary didn’t set any time limits on how long someone could be detained. The coalition extended the care to include three year Temporary Protection Visas, the Pacific Solution and excision.

Out of sight, out of mind

Debate last week rested upon the “Stop the Boats” mantra. All eyes were on the domestic political prize. The proposed bill might have stopped the boats and “solved” the government’s political problem. But it would do nothing to solve the problems of the people getting on the boats. Instead, their problems would be pushed out of our sight and they would be left to fend for themselves without status in Indonesia, Malaysia, Pakistan or Iran.

The people getting on boats know the crossing is dangerous. But all their options carry danger. They face danger in their home countries, in border towns and refugee camps, and in transit countries. At least the danger on the high seas holds the hope of safety ahead.

The solutions being discussed in Australia all focus on removing the enticement of safety ahead as a deterrent. None offer a realistic chance of safety at any step prior to the boat journey.

The largest group of people arriving in Australia by boat is from Afghanistan. Afghans are the world’s largest refugee population and have been for more than three decades; 96% of Afghan refugees are in Iran (1 million) and Pakistan (1.9 million).

Last year, a record high number of resettlement places were made available to Afghan refugees in Iran – just 1,350 visas. That’s a slightly better than 1 in 1000 chance of resettlement. Numbers of Afghans in Pakistan offered resettlement are not provided by the UNHCR. The focus there is on voluntary repatriation, although the security situation in Afghanistan makes this difficult to sustain as returnees quickly become refugees again.

Although the UNHCR considers Afghan refugees to be among the “largest and most protracted refugee situations in the world”, the reality is that resettlement through the UNHCR is effectively unavailable to Afghans. This leaves two ways for Afghan refugees to access permanent resettlement: enter a UN Refugees Convention signatory country and seek asylum, or be sponsored by a relative in a safe country. The second option often only becomes available after someone succeeds in the first.

Afghans are considered a “high risk” of seeking asylum by most signatory countries and are rarely granted tourist or other temporary visas. This means that Afghans wanting to seek asylum must enter without proper papers (a lawful right in Australia’s Migration Act as well as under the Refugee Convention).

Australia alone cannot solve the problems of all refugees. But there are policies that could be implemented quickly that would make a difference.

Increasing Australia’s refugee and humanitarian program to 20,000 would make 6,000 additional visas available immediately. If the government wants to stop the boats, it should look at who is getting on them and target the additional visas to those groups.

Perhaps 1,500 visas could be made available for asylum seekers in Indonesia and Malaysia – asylum seekers already in transit would see the “queue” moving and the expensive dangerous boat journey would immediately look less appealing. To avoid this becoming a “pull factor” into the region, the remaining visas could be allocated to refugees in Iran and Pakistan.

Working with the UNHCR

There are several precedents of nations working together and alongside the UNHCR to determine priority groups and end the protracted limbo of life in border regions. The Comprehensive Plan of Action for Indo-Chinese Refugees from 1989 to 1997 is an oft cited historical example. The resettlement of 100,000 Bhutanese refugees since 2007 has received little attention.

The UNHCR estimates that 786,000 refugees globally are in urgent need of resettlement, around a quarter of who are Afghan.

If Australia worked with the UNHCR to make resettlement through the “proper” channels a real enough possibility, it could reduce the need for refugees to get on boats in the first place. Then Australia’s politicians would really be doing something about deaths at sea.

Lucy Fiske does not work for, consult to, own shares in or receive funding from any company or organisation that would benefit from this article, and has no relevant affiliations.

This article was originally published at The Conversation. Read the original article.