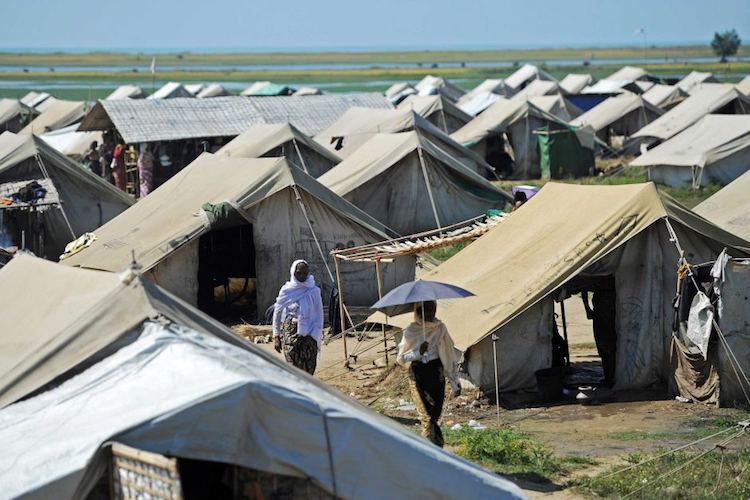 What we can learn from refugees this election?

Refugees who are thankful for small mercies have a lot they can teach to those in a lucky country who might regard them as a threat to their well being, writes Professor Stuart Rees.

In spite of the Rudd resurrection, the refugee debate in Australia is still framed in the odious game of gaining political mileage by demonstrating a certain chauvinist pride in protecting borders.

To that end, to convey that the assessment of refugee status is not tough enough, that too many unworthy people may gain entry to this boat-people-besieged-country, the Foreign Minister Bob Carr claims that as many as 100 per cent of Iranian asylum seekers may only be “economic migrants”.

Yet, in crowded camps on the Thai Burma border, the values of refugees and their supporters suggest that if Australia wants to build a fairer society, much can be learned from refugees – people so easily stigmatised as unwanted and unworthy.

Evidence from Jim Chalmers’ recently published book Glory Daze shows Australians bemoaning their financial lot even when most enjoy the benefits from an affluent economy. On this issue there is a chasm between the values of refugees and their supporters and the priorities deemed important by politicians.

Different attitudes towards entitlement to health and education services are an indication of the width of this chasm.

Kachana, the director of the Burma Children’s Medical Fund, describes her work:

Of course we provide medical services as a right, not just because our patients are poor. We do depend on donors to finance our services but how could you talk to sick people about costs when our responsibility is to meet their needs?

In the Thai border town of Mae Sot, the Mae Tao clinic provides medical services for hundreds of thousands of refugees and migrant workers. The director of the clinic, Dr Cynthia Maung, gives me her interpretation of a common good:

During the funding crisis of last year, we were $650,000 short, but we could not afford to charge patients. To combat that crisis, all the staff agreed to take a 20 per cent cut in their meager wages.

That reduction was uniform because of an equity in pay policy: same wages for surgeon, nurse, social worker, fund raiser, accountant, librarian or manager of sanitation.

My interpreter and guide in the Ma Lae refugee camp was a 41-year-old Karen named Law La Say, whose salary for his job to train camp residents to be therapists for drug addicts is $250 per annum. To the question, “How do you mange to be so optimistic?”, he answered:

I survived 17 years in the jungle, always on the move from the Burmese army. There was no time to cry. Laughing expresses my feelings. This camp may seem like a prison, but we know one another, we can support one another.

I also lived in the jungle. This camp is better because it is our family home. We know we are refugees but we have hopes for our children, even for repatriation to Burma.

With a shy smile she adds:

But don’t believe what they tell you about the reforms in Burma. The people in charge are the same people who drove us here.

In Australia, in the controversy over the Gonski report, state premiers still calculate the difference between their political fortunes and a commitment to children’s future education. The pugnacious Premier Newman of Queensland seems to favour his short-term political interests over any long-term vision about the quality of education for all children irrespective of their parents’ means.

On the Karen side of the border, the schools have no buildings and no desks. In small groups children cluster under the shade of a large teak tree. Their teacher explains, ‘Time is precious for our children. They are desperate to learn but our biggest problem is malaria.’

A final contrast in values concerns food. While Australian television is saturated with programs on how to cook, how to extend knowledge of nutritious dishes, and even how to lose weight because you have eaten too much, UN reports about Burma identify problems of hunger and food security. In their report Chronic Emergency, the Back Packer Workers Team from Mae Sot concluded that hunger and malnutrition has drastic effects in eastern Burma where one in 10 children will die before age one and more than one in five before their fifth birthday.

A refugee, Naw Doo, explains that she and her two teenage children are used to going without food:

Many times we only have rice and chilli. We eat twice a day. We get sick but that’s normal for people here. Look how thin I am.

In Australia’s election campaign, reference to a common good is unlikely. We are likely to hear derision about asylum seekers, probably talk about the benefits of privatising public hospitals to make them more efficient, and attacks against trade unions for eroding individual freedom.

Ironically, several significant projects on the Thai Burma border are financed by the humanitarian arm of Australia’s trade union movement, Apheda, whose staff value the ideals of a common good. To achieve such a goal, economist Jeffrey Sachs writes that perhaps the best we can do is to appeal to enlightened self-interest because it is everyone’s interest to care for the vulnerable and for the planet.

If the impressive Dr Maung became the campaign manager for Kevin Rudd or for Tony Abbott, she would emphasise why refugees who are thankful for small mercies have so much to teach those in a lucky country who might regard refugees as a threat to their well being.

On the hustings for either party, Dr Maung might start by explaining why health care should be given according to need and not according to an ability to pay:

If you want a healthy society, all people have to be treated as equals. If people are to live and work as equals, the barriers that divide them have to be removed.