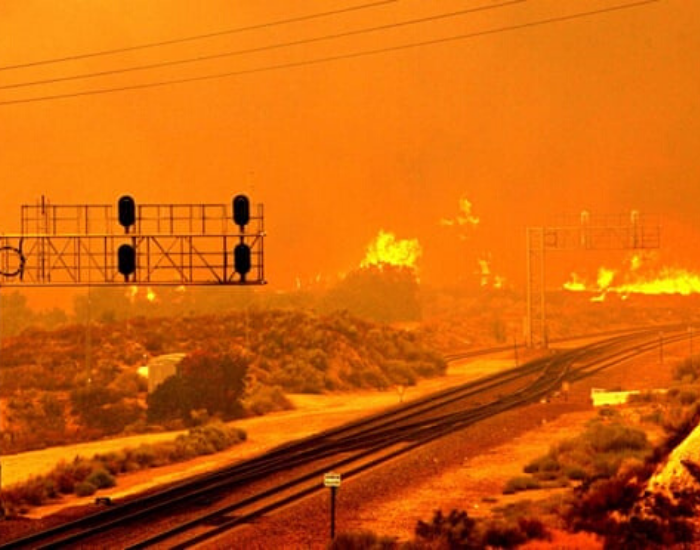 Joseph Stiglitz: “The climate crisis is our third world war. It needs a bold response.”

Advocates of the Green New Deal say there is great urgency in dealing with the climate crisis and highlight the scale and scope of what is required to combat it. They are right. They use the term “New Deal” to evoke the massive response by Franklin Delano Roosevelt and the United States government to the Great Depression. An even better analogy would be the country’s mobilization to fight World War II.

Critics ask, “Can we afford it?” and complain that Green New Deal proponents confound the fight to preserve the planet, to which all right-minded individuals should agree, with a more controversial agenda for societal transformation. On both accounts the critics are wrong.

Yes, we can afford it. But more importantly, we must afford it.

Yes, we can afford it, with the right fiscal policies and collective will. But more importantly, we must afford it. The climate emergency is our third world war. Our lives and civilization as we know it are at stake, just as they were in the second world war.

When the US was attacked during the second world war no one asked, “Can we afford to fight the war?” It was an existential matter. We could not afford not to fight it. The same goes for the climate crisis. Here, we are already experiencing the direct costs of ignoring the issue – in recent years the country has lost almost 2% of GDP in weather-related disasters, which include floods, hurricanes, and forest fires. The cost to our health from climate-related diseases is just being tabulated, but it, too, will run into the tens of billions of dollars – not to mention the as-yet-uncounted number of lives lost. We will pay for climate breakdown one way or another, so it makes sense to spend money now to reduce emissions rather than wait until later to pay a lot more for the consequences – not just from weather but also from rising sea levels. It’s a cliche, but it’s true: an ounce of prevention is worth a pound of cure.

The war on the climate emergency, if correctly waged, would actually be good for the economy – just as the second world war set the stage for America’s golden economic era , with the fastest rate of growth in its history amidst shared prosperity. The Green New Deal would stimulate demand, ensuring that all available resources were used; and the transition to the green economy would likely usher in a new boom. Trump’s focus on the industries of the past, like coal, is strangling the much more sensible move to wind and solar power. More jobs by far will be created in renewable energy than will be lost in coal.

The war on the climate emergency, if correctly waged, would actually be good for the economy.

The biggest challenge will be marshalling the resources for the Green New Deal. In spite of the low “headline” unemployment rate, the United States has large amounts of under-used and inefficiently allocated resources. The ratio of employed people to those of working age in the US is still low, lower than in our past, lower than in many other countries, and especially low for women and minorities. With well-designed family leave and support policies and more time-flexibility in our labor market, we could bring more women and more citizens over 65 into the labor force. Because of our long legacy of discrimination, many of our human resources are not used as efficiently as they could or should be. Together with better education and health policies and more investment in infrastructure and technology – true supply side policies – the productive capacity of the economy could increase, providing some of the resources the economy needs to fight and adapt to the climate breakdown.

Economists agree that there is still room for some economic expansion, even in the short run – additional output, some of which could be used to fight the battle against the climate crisis – there remains controversy over how much output could be increased without running into at least short-term bottlenecks. Almost surely, however, there will have to be a redeployment of resources to fight this war just as with the second world war, when bringing women into the labor force expanded productive capacity but it did not suffice.

Some changes will be easy, for instance, eliminating the tens of billions of dollars of fossil fuel subsidies and moving resources from producing dirty energy to producing clean energy. You could say, though, that America is lucky: we have such a poorly designed tax system that’s regressive and rife with loopholes that it would be easy to raise more money at the same time that we increase economic efficiency. Taxing dirty industries, ensuring that capital pays at least as high a tax rate as those who work for a living, and closing tax loopholes would provide trillions of dollars to the government over the next 10 years, money that could be spent on fighting the climate emergency. Moreover, the creation of a national Green Bank would provide funding to the private sector for climate breakdown – to homeowners who want to make the high-return investments in insulation that enables them to wage their own battle against the climate crisis, or businesses that want to retrofit their plants and headquarters for the green economy.

The mobilization efforts of the second world war transformed our society. We went from an agricultural economy and a largely rural society to a manufacturing economy and a largely urban society. The temporary liberation of women as they entered the labor force so the country could meet its war needs had long-term effects. This is the advocates’ ambition, a not unrealistic one, for the Green New Deal.

THIS ARTICLE  WAS WRITTEN BY PROFESSOR JOSEPH E. STIGLITZ AND FIRST APPEARED IN THE GUARDIAN.