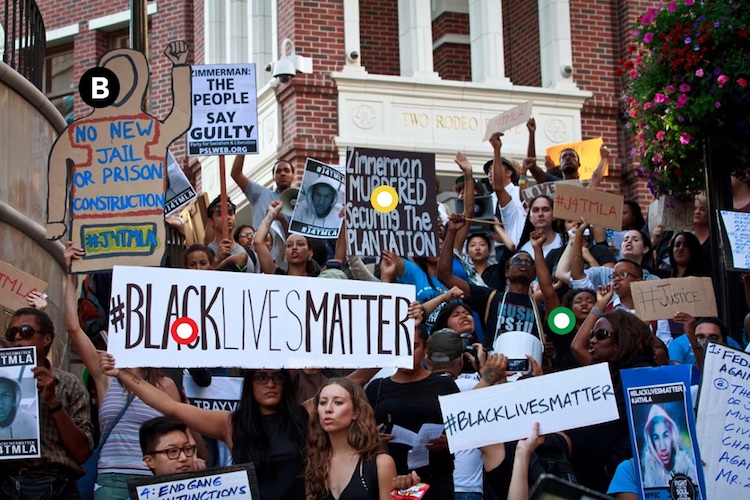 The organisers of the Sydney Peace Prize have announced that this year’s recipient is the Black Lives Matter movement in the United States. It’s the first time a movement, rather than an individual, has been awarded the prize.

The Sydney Peace Prize is an initiative of the Sydney Peace Foundation, a foundation of the University of Sydney. Previous recipients of the prize have included Archbishop Desmond Tutu, Naomi Klein, Noam Chomsky and Senator Pat Dodson. The prize “recognises the vital contributions of leading global peacemakers, creates a platform so that their voices are heard, and supports their vital work for a fairer world.” Winners receive $50,000 to help them continue their work.

The Black Lives Matter movement started in 2013 in response to the acquittal of George Zimmerman, who fatally shot 17-year old Trayvon Martin. The campaign was launched by Alicia Garza, Patrisse Cullors, and Opal Tometi and it focused on police violence and systemic racism targeting the black community.

Garza, Cullors and Tometi will travel to Sydney later this year to formally accept the prize.

The movement has had an enormous impact on US culture and prominent artists including Beyonce, Rihanna and Alicia Keys have paid homage to it in recent years. The issues raised by Black Lives Matter have resonance beyond the US. Indigenous activists in Australia have pointed to the parallels between the persecution of the black community in the US and the structural racism and violence experienced by Indigenous Australians.

Last year, Alicia Garza delivered the keynote address at the Sydney Opera House’s Festival of Dangerous Ideas, alongside journalist Stan Grant. Her talk discussed the origin of the Black Lives Matters movement, placing it squarely in the context of hundreds of years of oppression and resistance, as opposed to something that has only emerged due to the rise of social media.

The Sydney Peace Prize jury citation for Black Lives Matter reads “For building a powerful movement for racial equality, courageously reigniting a global conversation around state violence and racism. And for harnessing the potential of new platforms and power of people to inspire a bold movement for change at a time when peace is threatened by growing inequality and injustice.”

Patrisse Cullors, one of the movement’s co-founders, told Junkee that “When we started Black Lives Matter we called for it to be something that translates outside of [the US]. We understand anti-black racism is actually a global crisis. And we see the consequences everywhere.”

“Black Lives Matter was trying to intervene on was this idea that we were living in a post-racial society,” Cullors said. “Obama had been elected, it was still his first term and then Trayvon Martin was murdered. At the beginning of his next term George Zimmerman was acquitted. We knew as black folks that we weren’t living in a post-racial world, so Black Lives Matter became an intervention.”

But the movement has always been about transforming the way activism is done. “Internally, Black Lives Matter was about intervening into this idea that only black, male, Christian pastors could lead a movement,” Cullors said. “We knew the workers and strategists of the movement were black women. Black, queer women in fact. We wanted them to be the faces of the movement.

“There was no need to have a single leader. Even the three of us don’t represent the movement. There’s thousands of leaders inside of it. The chapter structure of our network — which is made up of 39 chapters –means we’re really autonomous and linked under a set of guiding principles that we’ve created.”

Cullors said that the election of Donald Trump had shaken Americans out of their “post-racial” naivety. “People are awakened to the gruesome reality of America. An America that is steeped in poverty, racism and capitalism. As a result of those three things we are unfortunately bearing witness to some of the ugliest parts of America,” she said.

“I’m an artist and part of my work is about exposing the reality of anti-black racism. But another part is about deepening our engagement with, and understanding of, black people’s resilience. We clearly wouldn’t be here, and there wouldn’t be a vibrant movement, if black people weren’t a resilient people.

“That’s what’s most exciting about this movement. We could talk about statistics all day, like the fact that out of the 2.3 million people in prison in America, one million are black. But we could also talk about imagining a new world. Imagine if we actually lived in a world where black lives matter. What would it look like, what would it take?”

This article, written by Osman Faruqi,  first appeared on Junkee on 23 May 2017