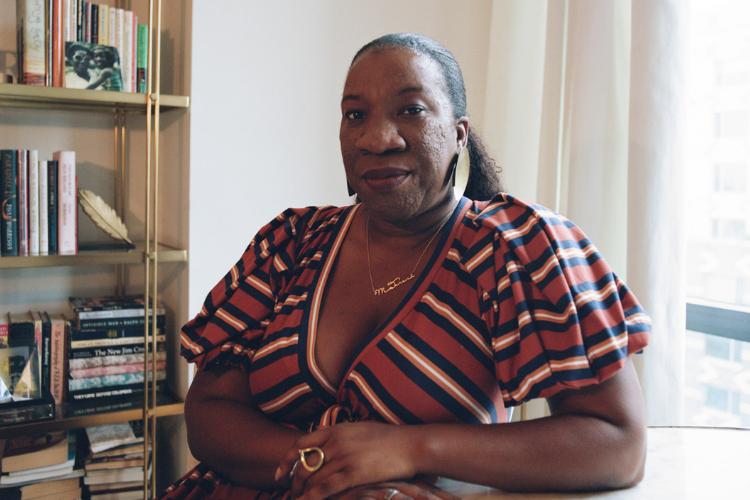 The way forward for Me Too, according to founder Tarana Burke

It’s been two years since #MeToo became part of the zeitgeist. There have been many stories, personal and in the media, that have motivated the public to confront workplace dynamics between men and women, consent, and the nature of sex itself. While these often-devastating narratives from survivors can inspire us into action or paralyze our senses, there is still much more work to be done.

Founder Tarana Burke remains determined to progress the movement. She speaks at colleges and universities across the country and is preparing the next generation of survivors to do the transformational work of healing.

Although Burke started the “Me Too” movement in 2006 to address rampant sexual violence, her advocacy work began when she part of youth leadership camps and sister circles as a teen; by her early twenties, she was leading her own. In her words, these healing circles were “a place to celebrate your joy and triumph” with other people who recognized that these stages are hard to reach. The catharsis comes not only from sharing one’s story of abuse, she said, but also what survival can look like after the trauma.

Over the years, she’s learned how to assess or reassess what healing looks like and the dangers of conversations that posit abusers at extreme polarities. There are different levels of severity when it comes to harm done, she says, and therefore we have to be mindful, sensitive, and adjust our judgment accordingly.

Burke talked to Vox over the phone about her humble beginnings, Me Too’s prominence and pitfalls, 2020 politics, and more. This interview has been condensed and edited for clarity.

I remember reading a profile of you in The Cut a year ago and you were talking about the archetypal story of an abuser. And I have talked about this with friends and others: It feels like when there’s a man who is outed as an abuser that they are immediately compared to Weinstein. “They’re not as bad as Weinstein” — as if, you know, because of that we can breathe a little easier. What is the danger of this framing of an archetypal story of Harvey Weinstein, for example, as “the most monstrous abuser there ever was”?

I’m grateful you asked this question because this is super dangerous, right? So I’ll give you an example. When the controversy happened around Joe Biden and it came up about him making Lucy Flores uncomfortable, she never called him a predator. She never even used the word “MeToo.” She talked about the situation and described how uncomfortable and powerless it made her. I felt it was important to support her and her coming out and her ability to say that.

But the backlash I got was that I was making a big deal out of it and Biden’s a good guy — “He’s no Harvey Weinstein.” My response to that was, first of all, I don’t dislike Joe Biden. I appreciate some of the things that he’s done over time to support women’s causes like sexual assault on college campuses and the Violence Against Women Act. Outside of Anita Hill, I think he’s been a quintessential good guy around these issues, right? My argument about that archetype is that if we go from zero to Harvey Weinstein — if someone like Joe Biden, who is by all intents and purposes a “good guy” — if I can’t tell the guy who talks about sexual harassment, the statistics on sexual violence, and who fights for women’s rights, that I’m uncomfortable with his behavior, how am I supposed to fight a Harvey Weinstein? You don’t have to be a Harvey Weinstein in order to make someone uncomfortable and wield your power in ways that make one feel powerless.

That archetype is dangerous because it creates this dynamic of a boogeyman — that sexual violence is created by a “bad guy” or a “bad apple” and that the everyday average Joe who makes you feel uncomfortable is above reproach. These polarizing dynamics don’t create the space for someone to be like, “Listen, I know that you mean well but I don’t like when you touch me like that.”

You also mentioned that you never wanted the Me Too conversation to be a take-down. I thought that that was surprising because I feel like, with me, being a millennial and someone who’s on the internet an awful lot, when someone is outed as an alleged abuser, the next thing is to want to take this person down. I’m afraid to even ask what restorative justice looks like.

This, again, is about the hyper-polars, right? Sexual violence happens on a spectrum — everything from someone making you uncomfortable to an environment is unworkable or unlivable to actual physical violence — because that is the truth, then accountability has to happen on a spectrum. We have a long way to go before we have a clear-cut, straightforward response to what restorative justice looks like, but we won’t ever get there if we declare that every time someone gets called out for their actions it’s a “witch hunt.” And, we also won’t get there if the standard is regardless of what they do, we get rid of them.

In your TED Talk, you talked about how sexual violence often happens when people believe that bodily autonomy is not a basic human right. I thought about that in the context of black girls and women — we have a legacy in this country and abroad where it wasn’t a basic human right for us. And so I think that there are many of us who are still grappling with that and that trauma should never be normalized. Meanwhile, in the media, so much of Me Too is tied to white women. What do you think is missing?

I’m going to take my time with this. On the one hand, I think that the lack of representation of black women and women of color or any marginalized group in the media since Me Too has gone viral has been clear and gross. It’s been very difficult to have our stories told. But nothing about that surprises me. This is the reality that black women and girls have been living with our whole lives. It’s a dual argument. We have to be vigilant that we are represented in these conversations and stories in mainstream media, whatever that looks like.

But I also don’t want us to get caught up in white folks validating our pain in their media. Like, for example, there was a huge push for us to talk about R. Kelly, and rightfully so. But some of those same folks who yell and scream about R. Kelly are still going to call black girls “fast” and ignore issues in our community. We cannot sacrifice the work that has to be done in our community to stop sexual violence for the sake of some representation so that white folks can be like, “You know what? Black people also suffer from this.” They know. They’ve never prioritized our trauma unless it was to their benefit. And so while we have to make sure that we keep that chorus going with, “Don’t forget about us,” we have to also make sure in tandem that we are being just as serious about the work that has to happen in our communities.

You said you’re going to start doing your healing circles again in 2020. Are there any components that you’re going to tinker with or add, given Me Too and its prominence?

That’s what we’re actually working through now. What does it look like to scale up something that’s so deeply personal? We’re working with a team of professional therapists and social workers and folks who do this. My main concern is being able to vet the people who come to the training to make sure that they are not causing any harm or retraumatizing people. When I was doing healing circles in the community, I was leading them myself. But now, obviously, I can’t do that around the country.

I also look at our healing circles as recruitment ground where survivors can move into our survivor leadership training. Another part of their healing can be doing the work of fighting against sexual violence. Those two things are tied together in our programming. That’s not necessarily new, but it’s certainly a bigger part of how we’re approaching the work now.

Besides the healing circles, what else do you have on your plate?

One of the things that we’re building is a digital platform. In 2020, we’ll debut that. Since I’ve been doing the work, it’s been a goal of mine to create a space where all different kinds of survivors can find themselves. By that, I mean race, ethnicity, and religion, but also by whatever stage of healing that you’re in. A lot of what’s offered in public service to survivors is for immediate health crisis intervention. We want to help survivors wherever they are in their healing journey.

But we also want to push people into action. Part of the work of the digital platform is a tool to be active in the movement. We’re also excited about the election. We’re waiting on a candidate to tackle what has been one of the largest news stories in the last decade. Nineteen million people tweeted about Me Too in the first year after it went viral.

We are looking at something that in any other field would be classified as a public health crisis and yet we haven’t had a question even asked in any of the debates about this topic. We are interested in where sexual violence falls in the spectrum of things that candidates are prioritizing.

Morgan Jerkins is the senior editor at ZORA and the author of This Will Be My Undoing: Living at the Intersection of Black, Female, and Feminist in (White) America.

Miranda Barnes is a Caribbean American photographer. She lives and works in Brooklyn, New York.

This article was written by Morgan Jerkins and first appeared in Vox.