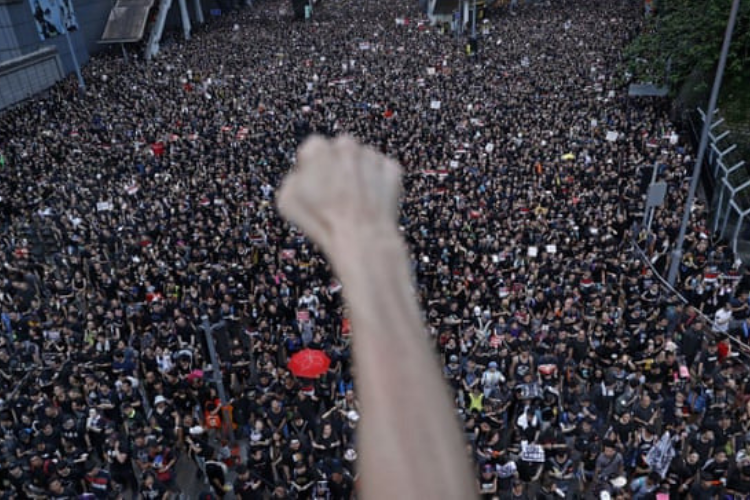 Hong Kong’s struggle is ours too. It’s a wake-up call to defend all basic human rights, no matter where in the world violations may occur.

The young activists’ aspirations – to assemble peacefully, to speak freely, to not be persecuted – are a universal cause.

Why do the Hong Kong activists matter to us? Because their cause is universal. Aerial images of vast crowds flooding the streets of the skyscraper-studded island are of course riveting. Equally fascinating is that, with China fast emerging as a global behemoth and surveillance state, this crisis serves as a barometer of what we might next expect of it and its president-cum-new-emperor, Xi Jinping.

There’s also an astounding element of David versus Goliath in Hong Kong, something that awakens a deep instinct in us, a yearning to see bravery and determination in the face of great odds: young people defying a giant and leveraging surprising tactics in their struggle.

As coincidence has it, this is all happening shortly after we’ve marked the anniversary of Tiananmen, and rewatched the footage of that man single-handedly stopping a column of tanks in June 1989 – an act of courage that remains a blockbuster. In Britain, there is of course particular interest in Hong Kong because of the colonial past, the 1997 handover, and responsibilities attached to it: the question of whether China will renege on its commitment to “two systems” looms large.

But something else is at work, something arguably more important than geopolitics, impressive TV pictures, heroic metaphors or what’s left of one European country’s diplomatic clout. And it’s this: Hong Kong offers up to us basic human aspirations that anyone, anywhere, can recognise and relate to.

When the activist Joshua Wong was released this week, his first words were about “fundamental rights and freedom”. He didn’t mention sovereignty, nor ethnicity, nor religious or cultural identity. As such, Hong Kong’s activists serve as a reminder of universal principles that we have become almost numb to in the age of suspicion, conspiracy theories, fake news, moral relativism and identity politics. We’ve become accustomed to thinking about rights from the perspective of a specific group, whatever its characteristics; but here are rights being fought for in universal terms: “fundamental” was the key word.

All human beings are born free and equal in dignity and rights”, and all are entitled to those rights and freedoms “without distinction of any kind, such as race, colour, sex, language, religion, political or other opinion, national or social origin, property, birth or other status.”.

This points to what was enshrined in the international charters drawn up in the aftermath of the second world war, when a global liberal order was tentatively put in place. As the 1948 UN-adopted Universal Declaration of Human Rights puts it: “All human beings are born free and equal in dignity and rights”, and all are entitled to those rights and freedoms “without distinction of any kind, such as race, colour, sex, language, religion, political or other opinion, national or social origin, property, birth or other status.”

We’re stunned by the images of Hong Kong not just because of the scale of these events or their historical dimension, but also because they somehow shake us out of a lethargy. Had we not become blase or cynical or fatalistic about the chances of defending human rights? Had we not started flirting with the notion that some principles might work fine for our western world but can hardly be considered as imperatives for others? Would that be because of our own imperfect record, our past empires, our “wars of choice”, our western desolation in times of Donald Trump, Brexit, the far-right in Europe, arms sales to Saudi, you name it? Or might it be because some of the nihilism on social media has blunted us? Hong Kong is a brilliant, festive wake-up call, but with an attached worry: can those young people prevail?

Take note also that for all our cringing about past experiences in regime change, the protests in Hong Kong have nothing to do western-fostered political pressure. They are not a CIA plot (however actively Chinese official propaganda may want to push that line) and they are certainly not the premise of a US-led military intervention.

Hong Kong rose up on its own. Just like Algerians did earlier this year. Just like the Sudanese protesters, crushed in Khartoum. What does that tell us, if not that we in the west, or our governments, are hardly the puppet masters that some claim they are? In fact, when you think of it, isn’t it rather contemptuous, if not racist, to hold the knee-jerk belief that distant peoples only rise up when some kind of American neo-imperial plan is lurking in the background? And can we decently claim we risk “imposing” norms on others when – loud and clear on our screens – thousands are in fact seeking our attention and support?

Hong Kong rose up against an extradition law that threatens to place any citizen there at the mercy of China’s autocratic system. What the demonstrators have marched for is driven by homegrown aspirations, not some foreign-concocted challenge to the Chinese regime. What motivates Hong Kong’s population relates to basic human dignity – something that’s borderless and found in each individual, not a product of western encroachment.

Another thing is striking: in an era of rampant nationalism, Hong Kong stands out as the absolute anti-nationalist protest for essential, individual rights. How indeed could this possibly be a nationalistic movement, when one same nation lives on the island and on the mainland? When you saw those images, perhaps you thought back to other momentous civil resistance struggles, born of local realities but universalist in their message: Martin Luther King and the US civil rights movement, the eastern European 1989 revolutions that brought the iron curtain down, and the anonymous heroes of the 2009 Green movement in Iran(10 years ago this month).

Hong Kong’s activists stand for something vital for us all: the right of the individual not to be persecuted or extradited to a dictatorship, the right to assemble without incurring prison, the right to speak freely, to enjoy freedom of information.”.

What I can’t help thinking about is Syria, a place where the struggle for fundamental rights met a tragic fate: the dreams of those who in the spring of 2011 poured out on to the streets asking for the end of a 40-year dictatorship. Hong Kong may seem far away from Syria, but the hopes of those people on the island aren’t much different from those of Syrian families who, for months, demonstrated peacefully each Friday with slogans such as “We want freedom”, “Dignity” and “Your silence is killing us” (words addressed to us). It’s now commonplace to depict Syria as an ethnic conflict between communities at each other’s throats, and to be sure, that has sadly become part of the picture after eight long years of war.

But in the early stages of the Syrian revolution, people stood up as one, no matter their origin or background, against a tyrant. Forgetting that very pertinent fact, or denying it, plays to this day into the hands of a regime that practises mass repression, ethnic cleansing and collective punishment – not unlike the Chinese authorities against some of its minorities. Hong Kong is ethnically Chinese but politically different from China (as is Taiwan). Against that backdrop, the events there do much to debunk the notion that cultural relativism can be an excuse to deprive people of fundamental rights.

This may seem obvious, but from Putin’s Russia to Sisi’s Egypt, and even in Europe with the likes of Viktor Orbán in Hungary and Jarosław Kaczyński in Poland dismantling the democratic rule of law, the argument is constantly made that “traditional values” or specific national contexts make it undesirable, or impossible, to abide by internationally agreed standards that protect individual rights. If China’s rulers have their way in Hong Kong, there’s little doubt they will deploy that same line as a fig leaf for oppression.

Hong Kong’s activists stand for something vital for us all: the right of the individual not to be persecuted or extradited to a dictatorship, the right to assemble without incurring prison, the right to speak freely, to enjoy freedom of information. If we are truly internationalists or anti-nationalists, now is the time to embrace all those seemingly distant struggles as our own, and without distinction, without selective or variable indignation. Not because it suits our political agenda or our interests, but – yes, let’s say it – in human solidarity. Universalism is not a dirty word, it is beautiful.

This article was written by Natalie Nougayrède and first appeared in The Guardian Australia on 19 June, 2019.